Does Whole Foods have a backroom problem? 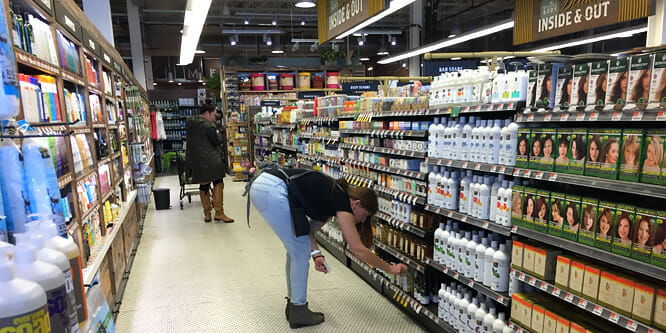 According to a report from Business Insider, the rollout of an order-to-shelf inventory system is being blamed for frequent stock outs in at least some Whole Foods’ locations.

The system, which first began being implemented in 2016, basically moves some products directly from the loading dock to store shelves to reduce the need for backroom storage and more efficiently bring product to shelves. The benefits of what’s also described as a “store ready” distribution model include reductions in inventory, store labor, waste and shrink along a with promise of better in-stock positions since items are being replenished more quickly. Such a system also helps supports online delivery from store.

On a quarterly conference call in February 2017, Ken Meyer, Whole Food’s EVP of operations, said its order-to-shelf initiative had cleared Whole Foods’ backrooms of all items except “never-outs” or items continually re-stocked. He said, “It’s creating a really strong, efficient process, from the way the goods are received in the back door to bring them right out to the shelf. And it’s really improving and helping our out of stocks, as well — dramatically.”

Target rolled out a similar automated ordering system around the same time.

But interviews with seven Whole Foods employees by Business Insider indicate that, while less food is spoiling in storage rooms, out of stocks have been more of a regular occurrence on shelves. The problem is exacerbated, according to the report, when there is an unexpected increase in shopper demand or a product shipment delay.

Barclays, in a note in early January, wrote that it had likewise witnessed empty shelves inside Whole Foods stores, although the analyst felt the problem may be due to increased shopper traffic following the Amazon merger. “This is a high class problem if in fact sales have really accelerated — but is also an execution issue resulting in lost sales.”

DISCUSSION QUESTIONS: Are you a fan of order-to-shelf inventory management systems for grocers? What are the primary execution challenges for grocers attempting to reduce stock in backrooms?

Please practice The RetailWire Golden Rule when submitting your comments.
Braintrust
"Whole Foods really needs to strike a balance between empty shelves and this kind of automated system."

"The retail industry has tried to improve store order/replacement for years. The problem is that the proposed solutions are worse than the problem."

14 Comments on "Does Whole Foods have a backroom problem?"

This is a perfect example of the vicissitudes of unit inventory management. A retailer can add safety stock in a back room to prevent stock-outs created due to unexpected demand and delayed supplier shipments. Customers will be happier and there will be fewer lost sales. But this comes at a cost (additional space and inventory). Of course, the answer lies in striking that balance that we call perfect inventory management. It is not a trivial pursuit and few if any will get it right, ever.

A huge challenge for most retailers is the logistics and infrastructure required to manage the inventory at such a refined level. Evolving Big Data and analytics will enable more accurate forecasting of replenishment (except for major events like hurricanes). Having enough trucks and frequency of deliveries to meet demand could prove to be a major challenge in many cities. Driverless delivery becomes a real success factor in scaling this model. While there are some current challenges, this is the high class problem retailers need to solve in the future of retail.

Whole Foods backroom issues are emblematic of the industry as a whole. Physical retail has to figure out inventory and assortments, or risk losing out to endless aisles online, where an ever-growing number of competitors vie for consumers’ business. The retailers who can figure this out will be well-poised for the future.

Grocery stores that carry such a varied assortment of products such as Whole Foods may find that the order-to-shelf inventory optimization systems may not necessarily meet their needs. As evidenced by the recent developments, the out-of-stocks have been happening more often than not, and have generated the wrong kind of publicity. A critical component of Whole Foods’ success has been to always be in-stock with key items. Having a robust marketplace-like produce section and an array of organic products makes the brand what it is. The post-acquisition Amazon stage has generated plenty of interest in the Whole Foods brand, which may attribute to the increased demands. Yet while we all applaud inventory optimization, the grocery customer is not as tolerant of out-of-stocks or bad experiences in the store. The last mile has been the challenge for online retailers and could create a similar issue for grocery stores if once the products are out of stock they generate a shipment. There are lessons to be learned here, and I am confident that Amazon/Whole Foods will perfect… Read more »
4
|
0
-   Share

The theory is great, the reality not necessarily so. Whole Foods really needs to strike a balance between empty shelves and this kind of automated system. An easy option is more frequent deliveries to store – like once a day, but that gets expensive and likely negates the gains that an automated replenishment management system offers. A better solution is to pick and choose what products need more backroom inventory and which don’t. High turnover and repeated out-of-stocks indicates more in-store inventory is needed, rarer out-of-stocks fit the system better.

As a regular shopper, produce is where I see the most low/no stock issues and the store often is wrong about when a particular item will be coming in. More work is needed.

No retailer wants inventory in the backroom, but “no backroom inventory” will never happen. The retail industry has tried to improve store order/replacement for years. The problem is that the proposed solutions are worse than the problem. Backroom inventory was first believed to be caused by the order writer. In the ’80s we changed from paper to scanning the shelf label. The idea was to cut out the time required and errors. Then we tried replenishment off of scan data. Since the data is still only 85 percent correct you either have backstock or out-of-stocks. For years I have marveled at how Walmart claims its replenishment system eliminated out-of-stocks except when I am in the store. I find their out-of-stock rate is higher than most retailers. What is missing is the understanding of shelf holding capacity and item sales variation. I know with internet sales retailers are moving toward item vs. case replenishment, but at what cost? Yes I am a fan of computer-supported replenishment, but understand the physical side before developing the technological solution.
4
|
0
-   Share

I am supportive of Whole Foods’ move to shelf inventory management. It will require Whole Foods to tailor its system to fit the various types of inventory they have. They likely would still need to carry some backroom inventory for some heavily trafficked products. It will make it much more efficient for managing inventory costs and reducing throwaway, but execution will have to be fine-tuned and staff will have to be trained.

Glad to hear that 20 years of best practices, new technology and bigger data still haven’t completely solved this problem. There is still a need for common sense supply chain practices. The odd part is that for grocery stores who have well tenured department managers that do ordering, even without sophisticated technology these experienced people do a pretty good job of keeping the shelves reasonably full and spoilage reasonably low. The hard part is finding these people to work in stores these days. It all goes back to the demand plan.

Until inventory systems manage on-shelf stock levels separately from back-room stock, the problem will never go away. You can only sell from shelf stock, but most retailers only manage “balance on hand” which leads to off sales, inaccurate demand assessment and the problems shown here. There are answers!

As a long time Whole Foods shopper I started noticing differences late last summer. Product I could only find at Whole Foods, and a driver of why I shopped there, began to disappear. Deterioration of the quality of the produce and empty shelves became noticeable just before the holidays.

This is a variant of “just-in-time” delivery, which was seen a few years ago as some kind of miracle that allowed Japanese companies to be more efficient. Of course once it was analyzed, it was seen that the process simply shifted costs from manufacturers back along the production process to suppliers (so it might have been more efficient, but not to the degree claimed).

Inventory is a battle between shipping costs and real estate costs — i.e. between continuously replenishing from offsite vs. storing onsite — and Amazon being Amazon (though this program predates their ownership) is likely trying to get suppliers to make daily deliveries, regardless of the costs of doing so. We’ll have to see where this ends up, but in the end, I suspect Whole Foods will have to give up their fantasy of zero back room … if that in fact was the ultimate goal.

No. This appears to be the usage of poor statistics for this article. Using a 7 person “interview” does not create facts. There are no hard numbers here, no factual history, and no comparison between order-to-shelf and other fulfillment models. Furthermore there are no large scale numbers to support the foundation of this article.

Quotes do not create a basis of fact. We need to always pay heed to the old Mark Twain adage “There are lies, damn lies and statistics…” and this article doesn’t even have good statistics.

This type of automation can really be of benefit to retailers’ operational expense, but if done incorrectly (as in Whole Foods’ case) will be a dramatic and negative impact on the CX. There are many variables to accommodate to hit the perfect balance of in-stock versus out-of-stock, and it will change daily due to outside factors, like weather, supply chain variables and difficulty in forecasted demand. For an operational system like this not to be a detriment, the data models and algorithms used to forecast will constantly need to be revised.

This is a new frontier and will get better with time and will hopefully help retailers financial standing to invest in other areas. But it will be some rough road until that perfect balance is achieved.

The quest for perfect unit inventory management and replenishment continues! The concept is of course excellent, but more difficult to execute in practice, and it’s really a question of scale. I recall other retailers following this path (Vitamin Shoppe comes to mind) but the volume of merchandise being replenished in each case was lower than your typical fast moving product in grocery.

The challenge really has to do with the logistics and transportation of product to the grocery store in time to prevent an out-of-stock. Careful analytics of past sales can mitigate this, but, there are other factors — seasonality of product, sudden shopper shifts in taste (think of a viral video on YouTube suddenly driving desire for one brand over another and the inventory management system isn’t replenishing the new brand). Plus, there could also be other infrastructure questions around store network connectivity that doesn’t allow for the inventory order management application to process transactions in near real-time as required.

Braintrust
"Whole Foods really needs to strike a balance between empty shelves and this kind of automated system."

"The retail industry has tried to improve store order/replacement for years. The problem is that the proposed solutions are worse than the problem."