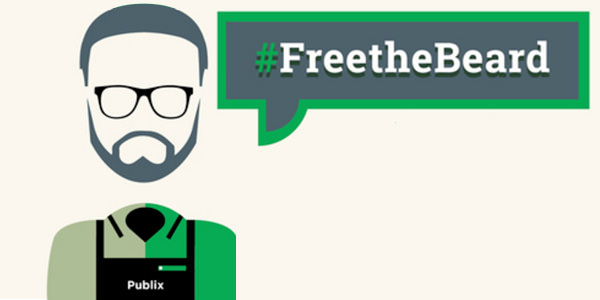 Beards, tattoos, earrings and other piercings almost serve as a generational uniform for male Millennials. Retailers faced with the reality of having to staff stores with low wage workers have loosened dress and personal appearance codes in recent years.

The most high profile example in recent years is Starbucks, which made the decision in 2014 to allow baristas to have visible tattoos while working, as long at they did not appear on faces or necks.

Now comes news that more than 14,100 have signed a petition on Coworker.org asking Publix to reconsider its dress code and allow employees to wear beards.

According to a Tallahassee Democrat report, Publix lets workers in its GreenWise Markets sport facial hair, but the practice is banned in the rest of the company’s stores.

Should Publix and other retailers allow employees to sport beards? How should management at retail handle this and other generational appearance issues in the workplace?

Please practice The RetailWire Golden Rule when submitting your comments.
Braintrust
"Many of the best and brightest Millennials have facial hair, ink and piercings. That shouldn’t automatically take them out of the labor pool for life."

"Does an employer have the right to demand a particular standard of dress, appearance, behavior? Could pregnant women or the obese be affected?"

"Does Publix really think that clean-shaven associates versus neat-bearded associates make a difference in sales? Come on Publix, get over it."

17 Comments on "Employees to Publix – Let our beards grow!"

Management needs to decide how it wants its employees to face the public and employees need to adapt or seek employment elsewhere. Beards, tattoos and body jewelry may be fine in some stores and not in others.

So … cards on the table … I have a beard which I have worn all of my adult life, so I may be a little biased here. The issue ought to be cleanliness, not style. If, for example, a person is working around food prep they should wear a hair net and — if appropriate — a beard net. By the same token, just like you wouldn’t want an employee waiting on customers with greasy hair, employers have a right to expect the hirsute among their employees to be clean and groomed. Oh, and for the record, four months or so ago a major study was released which compared bacterial counts on the faces of the bearded and the clean shaven. Turns out that the bearded faces were “cleaner.” Just saying … The same standard ought to apply to tattoos. One doesn’t want an employee running around with racist, sexist or antisemitic slogans inked onto their bodies in places customers can see them. But a butterfly … These are style issues. Many of the best… Read more »
0
|
0
-   Share

I’d rather see a tattoo than a beard. I believe beards need to be covered by nets in any food environment. So if all the workers in contact with fresh food agree to cover their beards on the job, I’d still be willing to shop Publix.

I agree with Max. Beards and tattoos are good for some stores, not for others. Publix is one of the “others.” Publix has maintained a clean-cut image for many years. It’s one of the reasons so many like to shop there. Call it what you want: Publix, keep your image clean.

Publix runs great stores, and if that is their policy, then so be it. My manager for frozen has a nice trimmed beard and it is just fine with me. Clean-looking, well-trimmed and personal hygiene are what matter to me, but I won’t tolerate a tattoo that is outrageous or spiked green hair with nose rings and face piercings. I don’t know how some people expect to find work looking the way they do, but hey I’m a Baby Boomer and was raised to look respectable, not ridiculous.

Readers of RetailWire will likely know that I too am among the bearded. So, as my country cousins would say, “I ain’t necessarily agin it.”

I’d like to advocate for a simple “if it is neat and clean” rule. But that would require a uniform application of judgement across a wide swath of stores, employees and managers to be fairly enforced. Is it the right thing? I think so. Would it be really tough? I am sure it would. So perhaps large employers like Publix are better off having a simple “yes or no” approach to any workplace rules that would otherwise require judgement. Sad, but probably true.

On a related note, my wife recently began ordering some great beard care products for me from a place called “The Bearded Bastard.” When the first UPS package arrived I thought Ryan had sent me a birthday present. 🙂

We are entering another complex issue here. There will be opinions influenced by one’s personal preference (I do/do not like beards), but there will ensue a long and drawn out discussion on the topic. Does an employer have the right to demand a particular standard of dress, appearance, behavior? Could pregnant women or the obese be affected? Some will argue that an employer can determine whom it wants to hire and how it wants those people to look, but biases and prejudices can sneak through that door, too. Others will argue that discrimination laws protect the employee. The question will come up: is a beard a question of personal freedom vs. discrimination? In certain professions, such as modeling, the way one looks IS the reason one does not get hired for the job. That is accepted. Yet one could argue that it is also out-and-out discrimination. One could also argue that if you want to sport a beard and your employer does not allow it, you should find another place of employment. You pick your… Read more »
0
|
0
-   Share

I stopped patronizing a deli when they hired a worker with excessively long and decorated fingernails. I just couldn’t get past what might be lurking beneath those fancy talons. So yes, I agree that stores should set personal standards that fit with their brand image. I expect to see tats and piercings at Whole Foods and Starbucks, long hair and luau shirts at Trader Joe’s. At my local Kroger? Probably not.

Classification, discrimination and racism have filled our court rooms and torn away at the very fabric of our society for too long. Companies suffering form low profits should choose how they spend time and money by allowing only business growth topics and focus to be addressed and discussed. Remember, in a land of freedom nobody is better than anyone else and the people you preach against are also customers. It is time to snap out of it once and for all.

The question of wearing beards should have nothing to do with appearance. An employee with a neatly-trimmed beard makes a better presentation than a sloppily-dressed one with a neatly-shaved face. If a beard (or piercings or jewelry) is dangerous because of the particular job then it should be limited.

The trend? I was at a family get-together on Sunday. I was the only male without a beard.

Does Publix really think that clean-shaven associates versus neat-bearded associates make a difference in sales? Come on Publix, get over it.

It seems really strange to me that Publix would allow employees to have beards at some of their stores but not others. As long as hygiene isn’t an issue, the prohibition is pointless and just makes them look old-fashioned, un-hip and out of touch. It’s certainly not a good way to attract a younger demographic.

This seems to be a rare — I’m not sure “miscue” is the right word, but something along those lines — for Publix. Obviously they do just fine with the policy, but one wonders if they would do (even) better without it.

Speaking as a manager who (barely) survived the changeover to “business casual” in my marketplace, I will attest that having to apply judgment of what is and what is not acceptable became increasingly difficult and contentious, especially with some female employees. As tank tops grew tighter, and skirts shorter, and pants waistbands lower, with all the ensuing arguments/discipline/tears, we often regretted the latitude that had been allowed in good faith.

With that background, if there is one place where I shop that want to feel employees are not harboring germs, it is at the front space of the grocery/deli. I hope Publix stays with the clean shaven look dress code. It’s so much more clear and fair than having to decide whose beard looks fabulous and whose looks ratty and unkempt and then having some poor floor manager try to explain the difference and enforce it.

I’d speculate that one reason why some employers stick to a narrow dress and grooming code is that it may be simpler to define and enforce. But the substance of the code often tends to match norms defined by senior management, not necessarily current style trends.

Publix should be thoughtful about this as it considers what image it wants to present to which groups of customers. Some core (older) shoppers may find the current wave of waxed mustaches and ink a little off-putting. The customers it hopes to attract and keep for generations to come may regard it as a positive signal that Publix embraces the personal identities of its employees.

Wow, I just realized that facial hair, tats and lip rings are a medium that sends a message. An employer has a right to try to put limits on that message, but it does so at its peril.

How many employees do you need? What is the labor pool like in your area? How do employees in different jobs represent the face of the company (night time stockers in the backroom vs, check out clerks)? Develop standards related to cleanliness, state laws (hair nets), and appropriate image. Using these criteria may be more difficult to implement, but will be more flexible based upon the current local labor force.

As long as it is not offensive and turns off customers, why not? But a business should be able to have any dress or appearance code they want, as long as the employees know this going in. Like when you join the Army, you know your head will be shaved and you’ll have no facial hair.

Publix may be a slightly different case than most retailers or businesses generally. They are after all employee owned. So if “most” employees see a change as being good for the company, then they basically own the decision and outcome. However, if the existing policy remains, it may reflect that a silent majority are inclined to view Publix’s clean cut image as core to the company’s brand and success.

Braintrust
"Many of the best and brightest Millennials have facial hair, ink and piercings. That shouldn’t automatically take them out of the labor pool for life."

"Does an employer have the right to demand a particular standard of dress, appearance, behavior? Could pregnant women or the obese be affected?"

"Does Publix really think that clean-shaven associates versus neat-bearded associates make a difference in sales? Come on Publix, get over it."