Gap sends its Visa cardholders to Amazon and Target 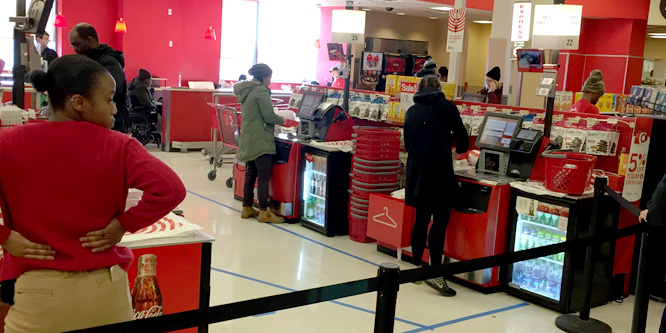 In what appears to be a pilot, Gap Inc. has rolled out a new promotion that provides its Visa Signature cardholders with bonus points for shopping at Amazon or Target.

Cardholders in New York City were alerted to the program via a mailer.

Under the promotion, those using their Gap Inc. Visa Signature card to pay for purchases during October and November earn:

The mailer states, “Earn big Rewards now. Then, redeem for holiday spending across all the brands you love.” 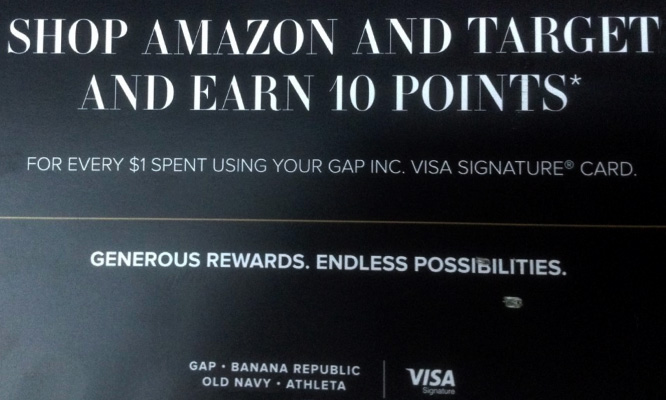 Gap’s PR office could not be reached to provide further details on the promotion.

Other retailers’ Visa programs include perks for making purchases on cards at outside merchants, although those outside retailers aren’t specified and they tend to downplay sending customers to potential competitors.

In July, American Express ended Plenti, a program that enabled consumers to earn points at one retailer and redeem them at another.

DISCUSSION QUESTIONS: What do you think of Gap Inc.’s promotion offering 10 percent back in rewards on Gap Visa purchases of “everyday essentials” at Amazon and Target? Do you see more pros and cons in such as an offer?

Please practice The RetailWire Golden Rule when submitting your comments.
Braintrust
"It seems this is Gap’s final capitulation to Amazon."

"So many problems, so little vision, so much grasping at straws for traction."

"Anything a retailer does that serves to increases their customer’s purchase power in a competitor is not good."

The Gap division has a multitude of problems. Product. Pricing. Presentation. Color management. Seasonal conversion. This does not solve 1 percent of those problems.

This is confusing to me. There must be a bigger benefit to Gap in charging the interest to the cardholders than the loss of giving back incentives plus the possibility of sending them to buy competitors’ products on Amazon.com and Target.com. Maybe the parameters of the qualifying purchases are so restricted that Gap is not giving up that much but it looks good from the PR side. Someone please explain it to me!

Well done Gap. Drive your shoppers into Target or onto Amazon where they can be exposed to the excellent apparel offer both retailers have developed. Poor thinking from a retailer that needs to get a grip!

Truly one of those, “What are they thinking?” moments for me. Gap embraced Groupon as the way forward and lost their shirt, now they’re sending shoppers to the ones most likely to put them under. So many problems, so little vision, so much grasping at straws for traction.

It seems this is Gap’s final capitulation to Amazon.

Moreover, this is just one step removed from mimicking Toys “R” Us’ devastating relinquishment of online sales to Amazon.

The message is “We know you’re shopping Amazon and Target so here’s an incentive that will trash our profit when you come back to redeem points before blowing us off again to return to our more effective competitors.”

From a string of CEO issues to digging in to e-commerce too little too late, Gap, a brand with the perfect demographic to master m/e-commerce, just can’t get out of its own way and will die of desperation in a few years if this tactic and similar ones are allowed to persist.

This makes no sense for Gap. Customers that carry a Gap credit card are probably their best customers … why would you even mention Amazon and Target?

I’m hoping that this was a surprise to the folks at Gap and that the idea came from the folks at Synchrony to drive more purchases with the card.

In the interest in presenting a contrarian viewpoint:

File this under: “if you can’t beat them, join them.” If Gap wants customers to buy its goods it needs to embrace what its customers are doing, which clearly includes shopping at Amazon and Target. Presumably there is some reciprocity from those merchants and/or its card partner Synchrony. It’s likely they identified enough data in their co-brand credit card (CBCC) file to support this move and the rewards from that credit card spend is generative for Gap. These are Gap’s best customers so in addition to creating more value for them, they might entice some “almost best customers” to further commit and apply for the CBCC.

The inmates are officially running the asylum.

If you want to be a financial services company this likely makes sense.

But since when does it make sense for a retailer to outright encourage their customers to shop at the competition (especially Amazon)?

This is an interesting concept that allows for financial symbiosis over competitive product positioning. It defies traditional marketing and the 4Ps,yet reaches for another reward. This might be worthwhile in some situations, despite the obvious.

Once upon a time there was money to made by offering your own credit card but this, not so much. This may make consumers want to get the card, for the points, but will it drive traffic into Gap? I don’t think so. And that’s my 2 cents.

Huh? What? Meaningless noise to consumers as the value of this offer is too difficult to track, let alone comprehend. Looks like Gap is giving a gift to consumers prior to its retirement from retail.

I read this several times to figure out if there was something I was missing, but I still don’t understand how this makes sense for Gap. Driving its customers to brands that sell similar products is driving customers to your competitors!

I am sure they are going to create quite a stir with this strategy, especially with the investment community.

Maybe this was a typo on a Gap marketing promotions campaign. When I reviewed all of the documentation about the Gap Visa card benefits and terms of the agreement, it doesn’t say anything about Target or Amazon. If it is a marketing mistake, it would be a mistake that causes someone to lose their job.

Not much; presumably the hope is that customers will stay with GAP for what they sell and (only) use the others for what they sell, but as the saying goes, “how are you gonna keep ’em on the farm after they’ve seen Par-ee?” And I would say that even without GAP’s history of unexciting comp sales.

Unbelievable. I can’t wait to see their next act.

Braintrust
"It seems this is Gap’s final capitulation to Amazon."

"So many problems, so little vision, so much grasping at straws for traction."

"Anything a retailer does that serves to increases their customer’s purchase power in a competitor is not good."