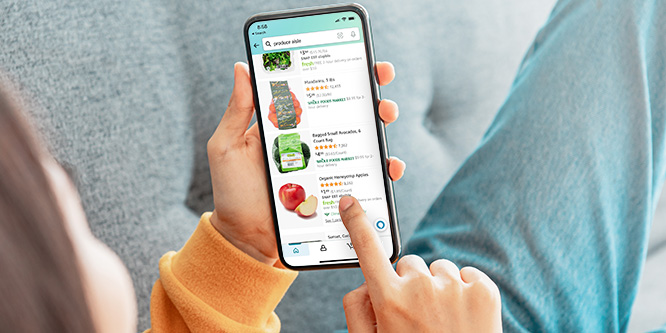 With e-grocery experiencing unprecedented adoption since the beginning of the pandemic, new shopper behaviors are emerging. One of them, according to a new study, is that e-grocery shoppers order via mobile far more frequently than from their desktop computer.

Two-thirds of online grocery orders today, in fact, are made from mobile phones, according to a study by 84.51°.

And a recent report on the global U.S. online grocery market by Research and Markets pointed to the greater penetration of smart devices as one of the primary driving factors in the increasing number of online grocery purchases. Other factors included hectic working schedules, an increased number of working women, the emergence of e-commerce media and a customer inclination toward hassle-free shopping.

There were indications that mobile was becoming a popular choice for e-grocery orders well before the pandemic-driven explosion in trial and adoption of the service. Peapod in 2016 reported that one-fourth of its new users were beginning and completing grocery orders via mobile. Thirty-four percent of Peapod’s customers were no longer using a desktop computer at all for ordering from the service at that time.

In addition to the finding about online grocery’s apparent mobile-centric tilt, the 84.51° study describes a few other nascent trends in the e-grocery world. It defines two distinct shopper personas: one new to e-commerce who uses online for grocery staples and basics and still shops mainly in-store; and one loyal to e-commerce who does 75 percent of grocery shopping online, with bigger and more varied baskets. It also finds that alcohol, floral and beauty have emerged as the major impulse categories online, whereas candy, magazines and bakery are traditionally in-store impulse categories.

DISCUSSION QUESTIONS: How should grocer assign resources when it comes to focusing on mobile apps vs. desktop sites? Do you see technologies like AR or VR possibly playing a role in online grocery ordering in the future?

Please practice The RetailWire Golden Rule when submitting your comments.
Braintrust
"With headless commerce, is it really too much for a retailer to do both?"

"We should pretty much always be thinking mobile-first in all aspects of user experience design, and grocery is no exception."

"'It’s the interface stupid.' The easier the interface, the more likely consumers will be willing to use it."

As with almost all customer-facing apps, retailers should take a “mobile-first” approach when designing applications. With busy schedules and more reliance on smartphones, consumers are spending more time on their phones than their laptops for personal shopping. Grocery shopping list apps can also have a dual role, for online orders or for easy access when shoppers pick their items while shopping in the store.

Resources need to be focused on the mobile device for sure. The user experience all comes down to how easy and well thought-out the interface is on the mobile device. With shoppers demanding a seamless experience, too many mobile apps are crowded with poor images, and even incorrect descriptions of the product. Retailers that don’t focus on the interface and user experience on their mobile apps will lose shoppers as shoppers lose patience with the ordering process.

Mobile-friendly is a must for any user interface these days. We’ve been playing with VR shopping for almost 30 years now. The benefits are not there yet given the costs to set up a store – you lose the long-tail advantage of online shopping with warehouse fulfillment.

The statistic about mobile vs. desktop’s share of orders (2/3) provides a clear answer to the question. E-commerce sales of general merchandise have been dominated by mobile devices for several years; any grocer who hasn’t caught up with a useful, easy-to-navigate app is missing business.

If I were a retailer I would most definitely allocate my resources to mobile apps. Desktop usage is generational just like printing and is aimed at a shrinking demographic. List management (Alexa list integration), intelligent substitution, and IoT integration are much more likely to be the practical applications rather than VR or AR.

Geolocation alone gives mobile the advantage in deserving more attention and resources. Google’s algorithm favors mobile. And the study by 84.51o points to impulse buys in categories where mobile is a huge plus, too. Actually, I don’t think there is much news here. With smartphones, most shoppers do everything while on the go and have for years.

Mobile is absolutely where grocers need to focus their efforts. They need think about their digital business holistically from a customer’s point of view. Winners have created easy to shop apps that allow customers to manage lists, make purchases and request the fulfillment option of their choice, curbside or delivery, seamlessly.

There are mobile apps (I use one) that enable consumers to create separate shopping lists on their mobile phones. Those apps can, and probably will, evolve to where those items are selected from. A list will be turned into an online order to the grocer. Adding the current trend towards mobile orders and adding these other possibilities, grocers should put more (not all) their efforts into evolving the mobile features. The next generation of grocery shoppers is very comfortable with navigating sites through their mobile devices.

This is not surprising. Most people are never very far from their mobile device and use it on the go and also at home while watching TV or doing other activities. This makes it the perfect device for tasks like grocery ordering. They key for retailers is to ensure that they are mobile friendly – making sure that images, buttons, navigation and so forth are optimized for smaller screens. Functions like shopping lists, favorites, and so forth are also important when people are shopping on mobile as they often want ease, convenience and speed.

I think mobile should definitely be a priority vs. desktop when it comes to ordering.
I think there is definitely a place for AR or VR in regards to digital couponing and offers, recipes, possible add-on item suggestions, etc.

With headless commerce, is it really too much for a retailer to do both?

While there may be some debate about the need for hyper-fast delivery, there seems to be less question about the desire to shop online – it’s convenient and quick. While I don’t see broad demand for AR and VR in retail settings (possibly after my mom gets an Oculus Quest!), there is still a big draw for BOPIS and BOPAC. Grocers and other retailers should be developing resources and strategies to encourage online shopping, internal picking, and fast, convenient pickup in-store or at-curb.

Is it really news that mobile is the first place someone will look for your website? Laptops and desktops are great for work but most shopping – whether grocery or apparel – is done sitting on the couch with a phone. Website design should follow suit.

Question asked, question answered: two-thirds of all grocery e-commerce orders are placed via mobile device. We should pretty much always be thinking mobile-first in all aspects of user experience design, and grocery is no exception. Give the people what they want!

I shop for groceries for a relative in another state via mobile app. In fact, I shop at a lot of different stores on my phone.

I want mobile shopping to be transparent, quick and easy. I find pop-ups during the process annoying, but perhaps wouldn’t if on a desktop.

Certainly, retailers need to recommend items so shoppers don’t forget necessities, and offer complementary items and store specials to up the sale. If they could figure out a way use technology to emulate the in-store experience – where shoppers are not bombarded with offers that distract them from the task at hand – it would be helpful. That tiny screen can only hold so much at one time.

Yes, mobile is not desktop. What may be information on desktop can be an annoyance on mobile. Mobile is trending because it is quick and simple. Make it more quick and more simple.

Quick and simple wins every time!

Whether mobile apps or mobile web is the focus, grocers, like all retailers, must consider the mobile device. Bring in a team that can manage mobile along with development or hire companies like MadMobile to help drive the mobile component. Resources should be at least proportional to the mobile business which is typically over 50 percent. The AR/VR part however can be put off – the key need for grocery is to have their product catalog and online checkout capabilities baked in. In addition to development, associate training on handling the mobile side of things is just as important. It can be awkward if customers come up to an associate and mention that prices on their mobile app aren’t matching those in the store.

Grocers should recognize that the online shoppers don’t just represent 40 percent or 54 percent of ordering, but the trend demands that most of the resources go to focusing on online. The data is more than a snapshot, but a telling indication of the future. Keep it simple, easy and fast.

As I keep saying over and over again – “It’s the interface stupid.” The easier the interface, the more likely consumers will be willing to use it. I don’t know about you, but my phone is almost always with me. I rarely take my desktop when I walk the dog, stop for a cup of tea, go shopping, or – to be perfectly honest – do anything other than work. Hello, it’s 2022! Why are we even talking about phone versus desktop? And, for planned shopping like Peapod, the data cited here seems to indicate than almost three quarters of all shoppers are still using a computer instead of a phone so, if I’m a retailer, which group am I going to cater to – Group A (25 percent of my shoppers) or Group B (75 percent of my current business)?

What is the future of mobile? In China, almost 75 percent of all shopping is done with mobile. That number is pre-COVID-19.

Gene, you think there might be a pattern emerging?

Our household uses desktop exclusively for online grocery shopping. If the polls and studies are to be believed, obviously retailers should focus their resources on mobile. But I don’t believe theses polls and studies.

If stats are true that over 90% of Americans own a cell phone, then the mobile experience needs to be driving grocery shopping just as much as the physical experience. If grocers are really wanting to expand their trade areas and compete with a larger customer base, then mobile will open new frontiers for them.

Braintrust
"With headless commerce, is it really too much for a retailer to do both?"

"We should pretty much always be thinking mobile-first in all aspects of user experience design, and grocery is no exception."

"'It’s the interface stupid.' The easier the interface, the more likely consumers will be willing to use it."