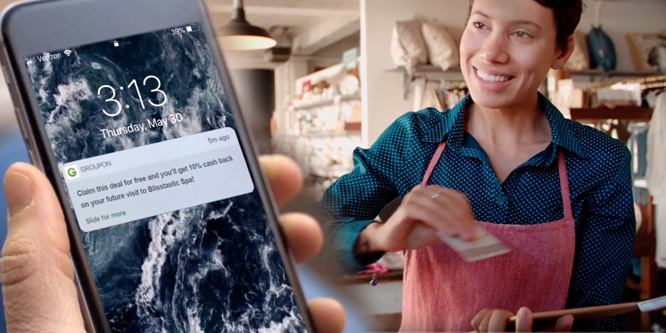 For $4.99 per month, Groupon Select members receive an extra:

In his letter to shareholders for second-quarter earnings, Rich Williams, CEO, said the program quietly launched over the last few quarters and more than 150,000 members have joined. He said, “Initial indicators are very positive with significantly improved purchase frequency, higher average order value and increased customer propensity to search for things to eat, see, do and buy.”

The launch comes as Groupon has shifted its core offering toward “voucherless” deals.

The deals are still driven by steep discounts available for a limited time, but Groupon’s card-linked offers reward consumers who repeatedly use the platform when they purchase from certain merchants. Groupon users avoid the chore of printing out vouchers to show to merchants.

For merchants, card-linked offers have been found to drive more repeat visits. Recently launched pre-paid versions, where consumers pay ahead for a deeper discount loaded onto their cards, have been gaining traction with merchants. More merchants are also adding loyalty card-linked offers, whereby consumers are typically rewarded with five to ten percent cash-back for repeat visits.

Groupon has also been refining its marketing spend toward “higher-value customers” who have the propensity to spend more often.

Second-quarter revenue was down 14 percent due to a 6.3 percent year-over-year reduction in active customers as well as reduced traffic due to e-mail and SEO headwinds.

Mr. Williams said Groupon still has more than 45 million active customers worldwide and its app this year surpassed 200 million downloads, including adding more than 22 million over the past year. He said “Our opportunity is to convert these mobile and online users into more valuable purchasers.”

DISCUSSION QUESTIONS: Are Groupon’s loyalty program and card-linked deals an improvement over its traditional voucher-driven offerings from merchants? What’s the best way for Groupon to monetize its still large, active user base?

Please practice The RetailWire Golden Rule when submitting your comments.
Braintrust
"Groupon really should have accepted that $5 billion offer from Google."

"Using card-linked offers vs vouchers may help, but as a shopper do I turn to Groupon for this or my credit card?"

"Maybe deal sites are towards the end of their lifecycle and need to reinvent themselves."

Numbers from mobile apps and loyalty programs are hard to read. 150,000 members out of 45,000,000 active. Not as strong a start as one would think. Depends on their definition of active. For Groupon to best monetize their audience – with vouchers or otherwise – will require a highly active, frequent touch model with higher spend. Using card-linked offers vs vouchers may help, but as a shopper do I turn to Groupon for this or my credit card?

The article doesn’t address the “why.” I’m recalling the years of cutting out coupons from Sunday paper inserts. And then loyalty programs began and then they had to be juiced and there was the discovery of limitations to juicing. Groupon is trying to juice up its active user base. How much can any one person buy or be incentivized to buy? Does someone on this thread have the answer?

Anything that you can do to get customers to come back, whether it’s a loyalty program or a marketing program (discounts, coupons, etc.), is a good thing. One of the most powerful metrics to measure is simple: Does the customer come back.

It’s something — I’ll leave it at that. I think there will be a very limited portion of their user base that will pony up the $5/month but even if it is $1 million out of their 45 million user base – it’s better than nothing. The linked card program is a good effort to tackle their huge problem of one-time usage by Groupon users but it too will be limited.

Groupon really should have accepted that $5 billion offer from Google. There’s nothing unique about their offering (heck, even my Washington Post offers Groupon-style deals) and asking for $4.99 per month sounds like a stretch. Wish I could be more positive.

They need to get rid of all the clutter and streamline the offerings.

What was most interesting to me was that a.) revenue has been down because of reduction in active customers and b.) the loyalty program was launched quietly. I would be interested to see if Groupon is able to use the program to continue to provide value to deal-oriented shoppers especially since so many companies already run their own promotions or partner with credit cards to promote. I don’t think that this will be what saves Groupon but it could stop some of the bleeding in the near-term.

” Loyalty is a matter of both principle and sentiment, conduct and feeling; it implies enthusiasm and devotion” [Century Dictionary, 1897] Nothing in there about 20 percent discounts.

I’ve challenged the very premise of “loyalty” far too many times in these columns. There are some brutal realities evident in this description of Groupon. “Groupon, the beleaguered daily deals website…” wants to “…convert these mobile and online users into more valuable purchasers.” It’s hard to expect loyalty to a beleaguered entity. The Toronto Maple Leafs are pretty well the only entity that’s been successful at it.

Some companies just should not go public. Forty-five million users are nice to have around, but they do not create nor guarantee the future of Groupon. What is Groupon? When Groupon started it was a novelty in time and digital shopping. Today Groupon has stiff competition in a very advanced digital marketplace. I am sure there are deals still to be had. Groupon needs a compelling reason to stay relevant. A reinvent rather than a loyalty card.

Adding a loyalty program and moving to a card-linked deals approach are both good strategies, however, they are Band-Aids for the real problem. Many consumers, including myself, have become bored with the offers on Groupon and other deals sites. The core problem is the quality and variety of the deals. Many of the “deals” are the same companies that are trying to get incremental revenue and most of these companies are not the best in their category. The best companies are doing well and don’t need to discount their services on a deals site.

It seems like the deals sites offer the same deals almost all the time and most are not very exciting.

Maybe deal sites are towards the end of their lifecycle and need to reinvent themselves.

I suspect that most of their problems stem from the quality — or really lack of same — of the deals offered, or at least the perception of a lack of quality … so simply offering more of what people don’t want in the first place is no remedy.

As a former Groupon leader, I am very confident that the card-linked deals are a significant customer experience improvement over the voucher-driven program that Groupon made its name on. The key for merchants will be how effectively that card-linked offers are visible to relevant users, and how well they drive incremental business volume for them.

Regarding Groupon Select, my view is that Groupon’s everyday pricing is very competitive and the offers that back up Groupon Select are not sustainable. Why don’t they work on a faster shipping option, instead of cheaper products/services?

Braintrust
"Groupon really should have accepted that $5 billion offer from Google."

"Using card-linked offers vs vouchers may help, but as a shopper do I turn to Groupon for this or my credit card?"

"Maybe deal sites are towards the end of their lifecycle and need to reinvent themselves."