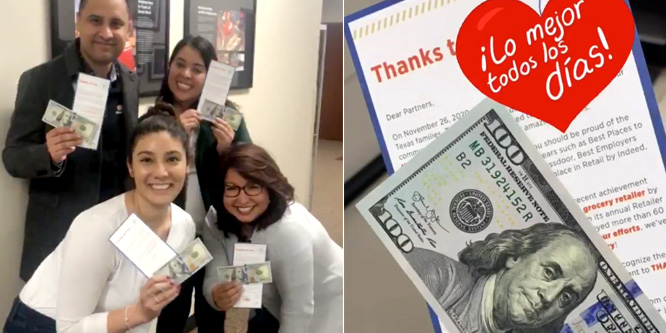 H-E-B last week handed out $100 bills to all employees after being named top grocery retailer in the U.S. in dunnhumby’s third annual “Retailer Preference Index” (RPI).

With over 120,000 workers across more than 400 stores, the grocer’s distribution totaled over $12 million.

The study surveyed 7,000 U.S. households to determine which of the top 60 largest grocers have the strongest combination of financial performance and consumer emotional sentiment. The Texas-based chain beat out Trader Joe’s, which had come in first in the first two years of the RPI. H-E-B moved up from four in 2019, surpassing Costco and Amazon.

A letter to employees, signed by CEO Charles Butt and three other top executives, said they should be “extremely proud” of dunnhumby’s recognition and noted that it builds on past workplace awards received from Glassdoor, Forbes and Indeed.

The letter continues, “We know the most important ‘ranking’ we get is from our customers, and it’s clear that you’re doing an excellent A+ job in running the business while taking care of our customers.

“On behalf of the entire senior leadership team, congratulations to each of you on this outstanding achievement. We are excited to continue with you on this journey of transforming H-E-B into the world’s greatest omnichannel retailer.”

The payouts became known after ecstatic employees displayed the letter and $100 bill on social media. One worker wrote, “This is why I love the company I have worked for, for 15 yrs.”

Another wrote, “Incredibly proud to work for the #1 grocery retailer in all of US!”

Many retailers have boosted pay and benefits in a tight labor market. While many distribute annual bonuses based on performance criteria, a surprise bonus like H-E-B’s is rare.

In January, Greggs, the largest bakery chain in the U.K., distributed about $400 to each to its 25,000 employees because the launch of the vegan sausage roll drove a strong year.

Another famed disbursement came from IKEA, which in 1999 let its then 37,500 employees share one day’s receipts — estimated at $61 million — to thank them for their efforts in the previous year.

DISCUSSION QUESTIONS: What do you think of H-E-B’s move to distribute $100 bills to all employees for being recognized as the top U.S. grocer? Should surprise recognition play a bigger role in supporting employee morale and retention?

Please practice The RetailWire Golden Rule when submitting your comments.
Braintrust
"Your frontline is your bottom line, right? These are the people who made this award possible; sharing it with them makes it real. "

"I’m sure it caused quite a stir and gave the employees a good reason to talk to each other in support of their employer."

"Frontline associates are everything in the store (ask Publix). That $100 “attaboy” shows appreciation, and that leads to retention. Smart move."

Although it is not a windfall to most people, it sends a message to the staff that senior leadership realizes that they would not have received the top spot without everyone in the company chipping in to make it happen. The act of giving the 100 bucks is secondary to the display of true appreciation for a job well done.

It is a very nice symbolic gesture by management. It says that management understands that the work is done in the trenches and those who face the customer on a regular basis have the power to make or break customer relationships. Of course that is not news, but recognizing it and appreciating it is a developing trend.

What a great message to the team — about the team. The operative word being TEAM. Look at how they responded! And how great is it that the celebration appears to be organic, and not a premeditated PR stunt? Individual pride is one thing, but imagine how rare it is to give 120,000 people pride in being part of a great performance.

Hi Jeff, trust me, they never do things as a PR stunt – that is never the objective for them. They would rather have kept this within the company.

This is always a good move. It is not the first time that H-E-B has recognized its employees’ performance nor will it be the last. H-E-B has always been (and always will be) about people and recognizing a job well done.

I agree 100 percent, Richard. The same culture that caused H-E-B to win the top ranking with customers is the culture that made the company want to share the success and recognize their employees.

H-E-B understands the importance of connecting on an emotional level, both with their customers and with employees.

It’s a nice way to recognize their employees as valued and instrumental in being recognized as top U.S. grocer. I’m sure it caused quite a stir and gave the employees a good reason to talk to each other in support of their employer.

Your frontline is your bottom line, right? These are the people who made this award possible; sharing it with them makes it real. I think it’s great, I wish more companies shared celebratory moments with more than just a memo.

It’s great, and while I’m sure most of us would be happy to have an extra $100 in our pocket, that works out to slightly less than 21 cents an hour for a full year of full time service. That said, I bet the employees were happy. And hats off to H-E-B for understanding that money is in fact a motivator contrary to what all those six-figure HR folk say.

Frontline associates are everything in the store (ask Publix). That $100 “attaboy” shows appreciation, and that leads to retention. Smart move.

This sends an instant message that the employees have worked hard to put H-E-B to the top of the grocer rankings, and they are being rewarded for their effort. While it is not a life changing amount of money, it is in their hands directly and $100 bills are unique enough that most employees have probably never seen or had one. This is why the employees are excited to reinforce the message with photographs and social media posts.

Surprise recognition only works if it is a surprise. These should be infrequent events to maintain the surprise.

A surprise $100 bill for everyone is a tremendous recognition. It builds team, it’s fun, everyone gets it, there’s no competition for bonuses.

It also only works because it’s a surprise. Yes. This is an excellent type of recognition every now and then.

For day-to-day recognition? Free people up to do their jobs with support from managers. That’s the recognition they really want — trust is the best way to recognize performance.

I cannot figure out why so many more retailers are so inept as to celebrate their staff contributions to business success. When a sense of ownership and and reward for sweat equity blossom, performance improves greatly. and when the staff has that attitude, new hires that join the team will be influenced by current staff members to up their performance. And then customers are thrilled.

Congrats H-E-B. I am hoping other retailers will absorb this lesson — it’s so simple … and so infrequent.

I note all the great comment about what H-E-B did. The one thing that makes it different and gave them real bang for the buck. Note this was not $100.00 added to a pay check. This was $100.00 given in cash. This was actually $100.00 that was totally unexpected. All I can say is something I’m sure most of their team members said: WOW!

How fabulous is it to have employees posting how proud they are to work for a company! Why shouldn’t surprise recognition (which does not necessarily need to be a hundred dollar bill) be an important tool for morale and retention?

The message resonates loud and clear. Management has told them they are the reason for the recognition.

Having visited their stores recently and talked to execs, H-E-B is the best traditional grocer out there — I’d say they’re giving their Texas counterpart a run for the overall crown.

Braintrust
"Your frontline is your bottom line, right? These are the people who made this award possible; sharing it with them makes it real. "

"I’m sure it caused quite a stir and gave the employees a good reason to talk to each other in support of their employer."

"Frontline associates are everything in the store (ask Publix). That $100 “attaboy” shows appreciation, and that leads to retention. Smart move."