Has Christmas arrived too early at Selfridges? 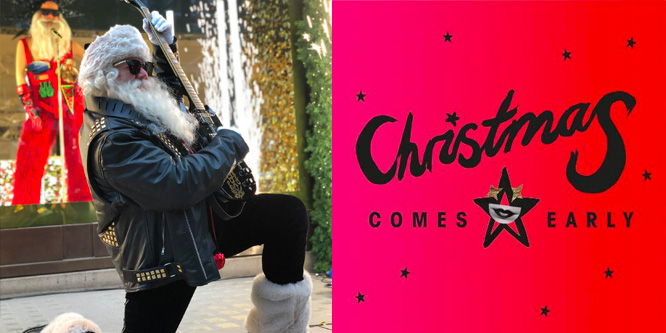 On July 29, Selfridges opened its Christmas shop at its flagship Oxford Street location in London, claiming again to become the first department store in the world to have a Christmas section this year.

The shop has been opening in late July for years and Selfridges says it has set the stage for its string of year-on-year record sales. Last October, Selfridges reported its twelfth consecutive year of record sales.

“We have so many customers visiting from all over the world, eager to snap up festive decorations and souvenirs on their London summer holidays which they can’t buy at home,” said Eleanor Gregory, Selfridges’ Christmas and home buyer, in a statement. “Our summer Christmas shop launch simply addresses the growing demand for convenience Christmas shopping outside the traditional Christmas season from many of our customers.

“They include a large number of domestic customers who love to Christmas shop very early in the year to get it wrapped and taken off their to-do list.”

The shop features more than 600 items, including a “Santa on a motorcycle” figurine for £45 ($55) and other glitter decorations. An extensive range of Christmas cards, gift wrapping and advent calendars are available.

In September, Selfridges will expand the section to 3,500 items, adding a velvet gold crown tree topper for £95 ($116) as well as handmade decorations, including David Bowie’s Ziggy Stardust and Prince ornaments. The full range is currently available online.

In recent years, many consumers have groaned upon hearing about holiday promotions arriving well before Thanksgiving. Yet, some appreciate the early buying. According to last year’s holiday shopping survey from the National Retail Federation, 21 percent of respondents planned to start their holiday shopping in October and 18 percent said they began in September or earlier. Spreading out their budgets and avoiding last-minute crowds were the most commonly cited reasons.

DISCUSSION QUESTIONS: Is Selfridges striking the right tone with its early Christmas shop opening? Should the summer promotion be copied in the U.S.?

Please practice The RetailWire Golden Rule when submitting your comments.
Braintrust
"They do it every year, why stop now?"

"From a supply chain point of view it is great, Selfridges gets their Christmas inventory out to its store at the quietest time of the year and before the main Christmas rush."

"For Selfridges, it’s a tradition! Christmas in July works great for them, there’s no reason to change. However, Selfridges is the exception, not the rule."

14 Comments on "Has Christmas arrived too early at Selfridges?"

Selfridges has opened its Christmas department early for as long as I remember. Every year the media report the story and Selfridges gets loads of free publicity. That’s a win in and of itself.

Selfridges is an exception in the retail landscape. It is a huge store in the middle of London which attracts tourists from other parts of the UK and around the world. They expect and demand some spectacle, and one aspect of that is seeing Selfridges’ fantasy Christmas department early on in the season. Shoppers buy baubles and decorative souvenirs and Selfridges makes money from it.

Could other mainstream stores with a more regular clientele pull this off? I doubt it. It would be an annoying distraction and a waste of productive space outside of the core holiday season.

In spite of me being quoted in one, these are clickbait. I advise retailers to begin displaying their holiday goods before Halloween — although not necessarily in the front of the store, and not necessarily at a discount. People are buying Christmas stuff all year long, so what you’re doing is pulling that demand forward.

And if you only sell 10 percent of the merchandise, I see that as a good thing because it’s 10 percent less that you’ll have leftover at the end of the year.

Not many stores have the cachet to pull this off, but being first and unique is part of Selfridges’ brand. From a practical standpoint, the early break is also a way to test-market items that can potentially be identified and reordered as best sellers.

With such a heavy summer tourist crowd in London and offerings that are totally unique to Selfridges, it makes sense to stay with this strategy. Obviously it has worked since they have stuck with it for years. In the U.S. – certain brands in heavily visited cities could test it and see what traction they get. Of course, here we have year round stores catering to Christmas so it would be tougher to generate the same type of results Selfridges gets.

Sounds ridiculous, ludicrous, even given their unique status relative to tourists. It suggests they are devoid of ideas about other seasonal opportunities. Can’t think of any great merchandising stories for August? Space to burn? Let’s just open Christmas shops in August. Just doesn’t feel right.

Setting Christmas in July is common in craft stores as makers need a head start in creating for the holidays. But full blown departments in most stores? I don’t think so. Christmas creep decor-wise already starts too early here.

Selfridges’ Christmas shop is another story. Its customers are from all around the world, many of whom want souvenirs to take back home so it makes perfect sense for Selfridges to open their Christmas shop in July. They do it every year, why stop now?

This isn’t about Christmas, It is about Selfridges. No other retailer could pull this off.

This is the history and personality of this great retailer. Forgive me and correct me if I get the story wrong but, as I watched the Masterpiece series, the Christmas in summer at Selfridges was introduced at the darkest point of World War I as a lift to the population. It has been a tradition ever since.

With this summer’s heat in London, it again sounds appropriate.

Christmas in August may work for Selfridges, but it would be a huge turnoff almost everywhere else. It’s already Halloween at plenty of stores, and it makes me want to turn around and walk right back out.

In my department store years way back, it was a “gentlemen’s” agreement that the day after Thanksgiving was the kick-off. Today, it is really a very simple move: when one competitor builds, everyone jumps in. That’s competition, and it is called Christmas creep. I call it competitive retail racing. That will never change.

For Selfridges, it’s a tradition! Christmas in July works great for them, there’s no reason to change. However, Selfridges is the exception, not the rule. For other department stores, especially those in the U.S. I don’t want to see Christmas displays until after Halloween. There are ways to test products and boost sales without pushing the Christmas creep, which is exhausting for customers and employees.

Anyone who’s worked in a store long enough knows that the longer you look at a product, the less you want to buy it over time. For retailers who rely on local, repeat shoppers, this strategy would stifle sales for holiday merchandise. The illusion of scarcity is a powerful thing. Selfridges, on the other hand, is targeting a large subsection of international shoppers on vacation, for whom access to these products is a novelty. It works for them, but shouldn’t be mimicked in most other settings.

Selfridges makes a big thing of the start of their Christmas offering, but this is not for all retailers. You have to remember a few important factors that make Selfridges special. They are on Oxford Street, London with one of the highest traffic flows of international tourists anywhere in the world. These people are on vacation and Christmas at this time of the year is different and special. They are a very traditional British department store, very upmarket and select so people think it is special to go in and buy at Selfridges. It is indulgent purchasing so once again Christmas is appropriate. Very few other retail outlets could carry this off successfully. However, from a supply chain point of view it is great, Selfridges gets their Christmas inventory out to its store at the quietest time of the year and before the main Christmas rush starts. This is very efficient, saving on additional resources at peak and using otherwise underutilized resources at this time of year. Many retailers would have to use the back… Read more »
2
|
0
-   Share

Selfridge’s has made this a tradition with local customers and tourists from abroad who expect and plan for it. While this works well for Selfridge’s, if many others jump on the bandwagon, the promotion will become diluted and less of a draw for customers.

Unless they decorate the main floor, I’ll forgive them. No, actually it is within reason a store’s job to offer what people want, be it Xmas in July or “Boxing Day at the Beach,” and I’m sure plenty of Downunder’ers can tell us celebrating the day in the middle of summer is quite reasonable.

Braintrust
"They do it every year, why stop now?"

"From a supply chain point of view it is great, Selfridges gets their Christmas inventory out to its store at the quietest time of the year and before the main Christmas rush."

"For Selfridges, it’s a tradition! Christmas in July works great for them, there’s no reason to change. However, Selfridges is the exception, not the rule."