Has Etsy been missing the boat with men? 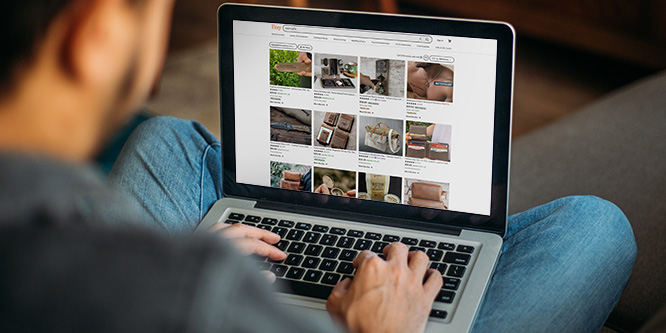 Men account for a quarter of Etsy’s buyers in the U.S. and U.K. and represented an estimated 35 percent of new U.S. buyers in 2021. The online marketplace believes that, in a craft world dominated by women, men remain underserved.

“We recently conducted research to better understand men’s shopping attitudes and behaviors, and learned that those who identify as men are as likely as women to be intentional shoppers, valuing handcrafted items, supporting small businesses, wanting to make a positive impact with their purchases or buying items that reflect their personality,” said CEO Joshua Silverman last week on Etsy’s first-quarter analyst call.

The top reasons men give for not shopping on Etsy, similar to women, all relate to awareness. Mr. Silverman said, “Etsy hasn’t come to mind. I haven’t had a need for the types of items they sell, and I don’t know what Etsy offers.”

The CEO said Etsy is just “getting started understanding these buyers” and developing product and marketing strategies “to help them learn the when and the why of Etsy, so we can come to mind more often.”

The men’s push comes as Etsy’s sales slow following a surge during the pandemic.

The arts and crafts industry heavily skews women. In its IPO filing last year, Joann’s said internal research found its typical customer is female (77 percent are women), spans a broad age range (69 percent are under 56, with 50 percent between the ages of 36 and 55), and has a median household income of approximately $75,000.

One challenge for Etsy may be that 79 percent of its sellers are women.

Past Statista research found that, while women are the dominant buyers in categories such as weaving, crocheting, pottery, ceramics and jewelry, men are by far the biggest buyers in leatherwork, metalwork and woodwork.

DISCUSSION QUESTIONS: Where do you see the opportunity and challenges for Etsy in targeting men? How might Etsy’s marketing or outreach approach have to differ?

Please practice The RetailWire Golden Rule when submitting your comments.
Braintrust
"Etsy will have to do significant research on what the side hustles are for men that could make for a marketplace on the platform."

"...just because women make up the majority of Etsy shoppers doesn’t mean they aren’t buying on behalf of men."

"Etsy is a great brand. I honestly think this might be an example of 'don’t mess with success.'"

10 Comments on "Has Etsy been missing the boat with men?"

Etsy’s commercials do tend to skew heavily female, so if awareness is the issue, start there. Show men using Etsy items to decorate their own homes or giving Etsy gifts to the men and women in their lives.

I agree, this would be the best place to start. Etsy missed an opportunity to market to men this past Mother’s Day. Start with making men aware of the unique gifts you can find on Etsy and the delight when someone receives a one-of-a-kind gift!

Etsy will have to do significant research on what the side hustles are for men that could make for a marketplace on the platform. The fact that such a high percentage of its sellers are women to me says that’s why awareness is so low for men. The buying occasions for men are also often so different than for women. There’s a lot of event-based purchases on Etsy for women for events that men simply don’t celebrate (e.g. bachelorettes, showers, etc). Research on the key milestones for men will help the platform cater to that demographic.

This could be an opportunity to partner with a retailer that has a store presence and a dedicated male consumer. Doing a deal with somewhere like Home Depot, Lowe’s, Menards, or even Ace Hardware for example could raise the digital profile of the more traditional retailer and allow Etsy to tap into that existing maker consumer. Perhaps even hosting in-store craft/maker tutorials in-store could bring this to life and allow local makers a voice on a larger platform. Ace Hardware could be a great synergy with its franchised, localized format.

Etsy’s underlying women’s empowerment premise is softly promoted through word-of-mouth among women. However just because women make up the majority of Etsy shoppers doesn’t mean they aren’t buying on behalf of men. Therefore, it shouldn’t be too difficult to build bridges to the source. Men appreciate hand-crafted products as much as women do so driving category awareness is half the battle. Duluth Trading does a great job of balancing its brand premise by showcasing the stories of women artisans and farmers wearing Duluth’s products. Etsy should launch a similar campaign featuring male Etsy artisans and customers.

I think the question is answered by the data that clearly shows arts and crafts skews very heavily towards women. Michaels, Jo-Ann, and Hobby Lobby all understand this and heavily skew their marketing to women. Etsy is a great brand. I honestly think this might be an example of “don’t mess with success.” If they want to capture marketshare from men, they need to do the research about what sorts of items their targets would be interested in and, I think, create a new brand or sub-brand that could focus on do-it-yourself folks or hobbyists who participate in crafts like woodworking for example.

The top reason men don’t shop on Etsy explains it all. “Etsy hasn’t come to mind.”

Men shop differently than women. Why do retailers make men’s apparel products easier to access than women’s? Because the men would not go further into the store. Men tend not to be searchers. Online, they know the sites that come to mind and use them—end of story.

“Don’t add to my time or effort to find what I want!” How does Etsy fix that? I believe it is almost fixed. If one of every three shoppers are men, I believe they are doing spectacular.

Etsy and its merchants have a significant opportunity to win more male buyers to their products and brands. They just need to look at what categories are attracting that demographic and target both your ads and SEO to them. I have shopped Etsy at least 3 times, maybe more, in the last year. With a little research and targeted effort, there is definitely a win in exercise.

Analysis, research and awareness are the best ways for Etsy to identify steps to engage with men as buyers and sellers.

Braintrust
"Etsy will have to do significant research on what the side hustles are for men that could make for a marketplace on the platform."

"...just because women make up the majority of Etsy shoppers doesn’t mean they aren’t buying on behalf of men."

"Etsy is a great brand. I honestly think this might be an example of 'don’t mess with success.'"