Hasbro wants to put all our faces on action figures 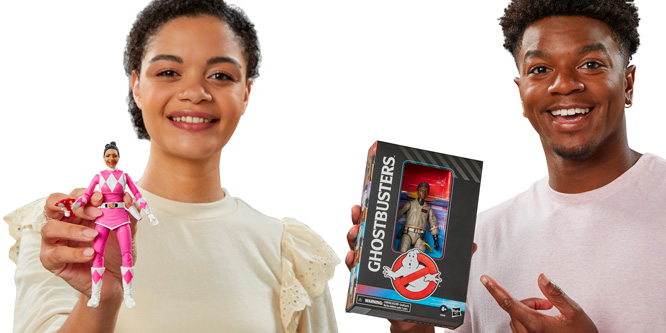 Hasbro has announced a new personalization platform, Hasbro Selfie Series, that employs 3D-printing to let consumers create a collector-grade six-inch action figure in their likeness for $60.

Under a partnership with Formlabs 3D, Hasbro will initially launch with costume designs from G.I. Joe, Ghostbusters, Power Rangers and Marvel, as well as designs inspired by Star Wars heroes.

To make a figure, fans download the Hasbro Pulse app, scan their face, customize the action figure and hairstyle, and send their mock-up to Formlabs printers. The offering launches this fall exclusively on Hasbro’s app.

Hasbro first began testing the use of Formlabs 3D printers in 2014. At about that time, the hype around 3D-printing replacing traditional industrial production and ushering in an era of mass customization was crashing, due largely to the underlying technology’s costs.

In a YouTube video, Brian Chapman, Hasbro’s president of design, development and innovation, said the toy maker had long recognized that superhero fans want to be “immortalized in plastic” by seeing themselves become action figures. Only recently, however, have two technologies arrived that make it possible — “a very simple way to scan someone’s face and head and then a very affordable way to print that head in a one-off way.”

Augmented reality (AR) applications with three-dimensional depth sensors have made 3D-scanning much more accessible from smartphones for more precise depictions of faces, down to skin tones and hair color. Improving the quality of resins has also helped scale the process to make the price more reasonable to fans.

3D-printing, also called additive manufacturing, has proven to be a fast and cost-effective way to produce functional prototypes, but still has limited consumer applications.

In a report that came out this past March, McKinsey wrote that faster machines, better materials and smarter software are helping to make 3D-printing “a realistic solution for many real-world production applications.” The consultancy still saw technical barriers, including slow speed and limited build volume available in most 3D-printing machines, integration issues with machines and production-control systems, and the cost and scarcity of materials.

Also still to be determined is what sort of demand there will be from customers for hyper-personalized products.

DISCUSSION QUESTIONS: Will Hasbro’s ability to produce a personalized action figure for $60 be a breakthrough for 3D-printing? What consumer product categories are most likely to offer 3D-printing applications over the next few years?

Please practice The RetailWire Golden Rule when submitting your comments.
Braintrust
"This is an inventive way to personalize options for the consumer and allow them to engage with their favorite brands while also testing 3-D printing functionality."

Brilliant! Hasbro has a sure winner here. The challenge will be maintaining ownership of the category as it grows.

Definitely a push forward for 3-D printing and a leadership position for Hasbro.

As someone who willingly sat four months on a wait list for a special edition Dapper Dan sweatshirt, I can attest to the power of waiting for something unique. Add personalization into the mix and it becomes an incredibly powerful way to not only drive sales of action figures, but affection for the brand. Now if they can just find more environmentally sustainable raw materials to print with, then I’d say everyone deserves to see themselves as a super hero!

One small step for 3-D printing, but a giant leap in marketing for Hasbro. Perhaps this will inspire other 3-D printing investments, but in and of itself, personalized action figures, while very cool for superhero fans, are yet another novelty application…

Some malls have kiosks that sell crystal cubes you can customize with your face on them. I have also seen kiosks with create-your-own action figures that charge more than double what Hasbro has announced.

I think this is a brilliant idea. I downloaded the app and signed up as soon as I read about this last week. I hope it’s ready for Christmas because I plan to order a lot of little Bender super heroes!

Two birds, one stone. This is an inventive way to personalize options for the consumer and allow them to engage with their favorite brands while also testing 3-D printing functionality.

Our research shows that 71 percent of consumers say something appeals to them simply for being rare or unique. This idea nails it.

I love this. May I be Captain America?

These will be great holiday gifts for kids AND adults. And don’t forget corporate. I can also see walking into an executive’s office and seeing their action figure on the shelf.

Shep, at $60 a figure this seems more like an adult toy. As to the executive market, are action figures politically correct?

Hasbro has an absolute winner with its personalized action figures. This is an excellent business case of how leveraging the power of augmented reality and 3-D printing could lead to unique personalized and authentic gifts. Hasbro has invested significantly in innovation since they began testing the use of Formlabs 3-D printers in 2014.

As the innovation processes have continued, the economies of scale have kicked in, and now Hasbro can offer some amazing and personalized products at an affordable price point. My only complaint is that these products and innovations were not available when I was a kid!

Hasbro’s initiative is only the start of how the power of augmented reality and 3-D printing could lead to a more significant product offering.

It’s so refreshing to see brands doing something innovative, smart, relevant and growth focused. It’s a physical manifestation of avatars and gaming.

This is going to be huge for birthdays and holiday gifting for kids. For adults, it’s clearly something that millions of narcissists will want for themselves; for those that know them, they will see this as the perfect gift!

It might be a breakthrough for 3D, but $60 for each figure seems a bit pricy, even if it is cheaper than many other similar commercial offers. It automatically takes a significant percentage of kids out of the market, assuming the market is in fact children and not adults. Let’s see, that’s $60 for one GI Joe, $600 for a personalized squad, $1,200 if you want to fight a squad of personalized enemies, well … you get the idea. I have a 3D printer in my basement and I’m having a hard time justifying the price, but maybe that’s the point. $60 personalized figures for the affluent, $20 generic figures for the masses. Based on my own experience, I’d say almost anything that’s the right size can be 3D printed and therefore customized, so the possibilities — while not endless — are pretty expansive.

The future of personalization seems promising. Hasbro has come up with an innovative idea. Today, one of the prime success drivers for retailers stands in providing customers with unique experiences. The use of 3-D printing and augmented reality can align well with the audiences of many retailers. It certainly holds great potential in businesses catering to the home improvement division, fashion accessories like jewelry, and boutiques specializing in gifting. People like customized products and are willing to spend more to have such experiences. So this concept will employ customers’ disposable money. Retailers can up their game with such creative offerings.

Braintrust
"This is an inventive way to personalize options for the consumer and allow them to engage with their favorite brands while also testing 3-D printing functionality."