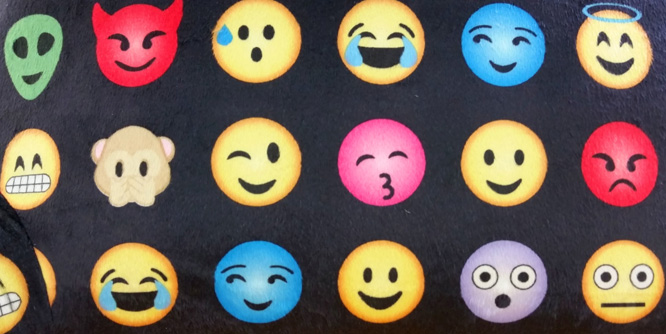 Adobe’s first ever emoji trend report shows how these graphic symbols have evolved as a way to break through the clutter of digital communications 📣.

A majority (64 percent) are willing to make a purchase with an emoji, such as texting a 🍕to order Domino’s.

Perhaps the most interesting part was how emojis help users express themselves to potentially encourage two-way communication with brands. For example, 65 percent of emoji users are more comfortable expressing their emotions through emojis than a phone call. This is especially true for Gen Z’ers (83 percent).

The study was released last Wednesday to commemorate the sixth annual World Emoji Day. As of March 2019, there were 3,019 emojis, according to the Unicode Standard. Seventy-six percent of Adobe survey respondents wish there were more emojis available 😢.

DISCUSSION QUESTIONS: What can emojis do that words can’t in consumer outreach and marketing communications? What downsides do you see? Do you see emojis being used more extensively as a communication tool for brands in the years ahead?

Please practice The RetailWire Golden Rule when submitting your comments.
Braintrust
"As a professional communicator, I find the corporate use of emojis both fascinating and frustrating."

"Like it or not, people spend with brands that speak their language and emojis are part of this (especially via SMS and social media)."

"I think I am too old for this discussion."

18 Comments on "Have emojis become digital’s ice breaker for consumers?"

I think I am too old for this discussion.

The weekend edition of The Wall Street Journal had a great article about the difficulty of expressing irony in digital communication, a subject with which I am all too familiar as irony, satire and colloquialism are personal favorites and I have learned the hard way that it is very easy to be misunderstood. Emojis give the visual option of inserting those nuances into digital communication without risking recreating your verbal/visual communication style in writing. Emojis give the added benefit of some standardization of expression as well. My biggest problem is that there are so darned many emojis to pick from now that I’m never sure I’m using the right one once I get past the ubiquitous smiley face!

As a professional communicator, I find the corporate use of emojis both fascinating and frustrating.

Bottom line: It depends on the company’s target market.

Younger audiences expect companies to adapt to their evolving communication norms, including the use of emojis – to the dismay of 1980s English teachers everywhere.

There are so many things we learned in English class that don’t serve us as professional communicators. For example, it turns out adverbs and adjectives don’t serve our writing in the way we were once lead to believe. And I do an internal happy dance every time I begin a sentence with conjunction.

Similarly, emojis have their place — newsletter subject lines and social copy come to mind. Still, I recoil when writers use them in other contexts (i.e. in the article above). They’re good for attention-grabbing and tone-setting, but less so for conveying actual points of view or distilling complex thought into digestible tidbits. We don’t talk in emojis, so we probably shouldn’t write in them for the most part, lest they break up our otherwise conversational tone.

So for me it’s less about proper English and more about getting our point across with as little friction for the reader as possible. Anything else is a distraction.

So true. Many of the rules we internalized are now archaic. Adapting to our audience’s expectations shows we’re nimble, relevant and attentive to their needs.

Thankfully, there will always be demand for articulate prose — but if emojis start popping up in thought leadership whitepapers, I’ll retire on the spot!

Here’s another con: different email providers translate emojis differently. I kept getting random letters at the end of some correspondences so I called the client to ask what it meant. On her Outlook it was a smiley face, on my gmail-housed platform it came across as a J. People read and perceive things differently — emojis in business emails are not for me.

We have gotten SO weird and regressed back to childhood. I’m with Gene Detroyer. But hey, if it works, keep doing it!

Have the majority of people lost the ability to write or speak? We seem to be becoming an emoji world where people can only express themselves by using emojis. What a frightening thought for when people grow up and need to communicate about a serious matter and they do not have the words to express themselves. Are words unfriendly? If they are, then surely it is the person writing the words that needs to think and not the fact they are using words. I have recently been involved in a WhatsApp group supporting a seriously ill relative with the objective of the group to add support during this tough time. A number of the people in the group, I expect Gen Zers, sent most of their communication in a string of emojis, many of which I did not understand! However, what worried me more was that emojis can be misinterpreted as they may have a different meaning to different people depending on the mood they are in or what they see. This could be a… Read more »
1
|
0
-   Share

On the one hand, language evolves, and whether marketers and retailers like it or not, they’re going to have to deal with new forms of communication. That said, to use a pizza emoji to order pizza seems gimmicky at best, and to encourage customers to express their opinions and desires with emojis is inviting disastrous misinterpretation (as per Andrew’s astute comments).

Marketers might give their customer service people more leeway to use emojis with the objective of lightening up and humanizing communications, but they should draw the line at using them in place of precise language. Words still matter.

There’s a World Emoji Day?! Geez, how’d I miss that one? For six years?

Seriously, we have recommended that retailers use emojis in their email blast subject lines in our retailer digital marketing programs for years – they set your message apart from other emails. Anything to get noticed in a busy email box helps.

I admit I use emojis on Facebook, but I’m not so sure about using them in business correspondence. I still like a real conversation. With actual words and punctuation.

Emojis grant conversations a casual feel that’s relatable for younger Millennials and Gen Z. Shopping is recreation for many young people and, as such, they need to keep it a fun, relaxed experience. Conservative language just doesn’t resonate with next-gen consumers.

Like it or not, people spend with brands that speak their language and emojis are part of this (especially via SMS and social media). So if brands don’t want to be seen as “the man” they’d better step it up and get emoticon-in’.

Here is the thing about emojis – part of their appeal is that interpretation is required. So the fact that there are people saying that they didn’t understand the meaning or felt out of the loop actually creates more enjoyment for people who ARE on the inside (especially when it comes to “slang emojis”).

Bottom line – emojis are an accent, not a language – but speaking in the native tongue is a good way to build rapport with your customers.

Emojis certainly draw attention to email subject lines and other similar types of copy, and of course in social media posts. They bring a casualness to the communication style a brand presents and depending on the target audience makes the brand more relatable and personable. Should they become so mainstay that they show up in every type of prose? Probably not!

That said, I was at a conference earlier this year when a keynote speaker asked the audience to think about their favorite, most commonly used emoji, and to turn to the person next to them and describe it. The result? It took almost 10 minutes to get the presentation back on track as everyone had something to share on this topic. Actually, the speaker was making a case for why the invention of the emoji may be the most significant “tech innovation” of the modern era! Doesn’t seem so hard to believe, does it?

If a picture paints a thousand words, then an emoji can paint at least a few. For basic communication, this works. It’s simple, quick and convenient.

Emojis are an emerging specialized form of writing that may be compared with ideograms in some ways. Unlike an alphabet that represents sounds, emojis represent things, concepts, ideas and of course emotions. They have the unique trait of functioning well within digital communications, but not in hand-written communications or speech.

I suspect emojis are going to stick around, evolve, and become more stylized as they become an extension to our writing system. Grammar and usage standards will follow, and schoolteachers will be tasked with teaching the next generation the rules. (Oy!)

From a media ecology perspective this is an important development. Like other communications technologies, emojis enable a different kind of thought. They can be very efficient in conveying meaning. They may be recognized and interpreted by humans who speak many different native languages.

Marketing pros need to master this new extension to representative language and learn how to put it to use. I suspect 3019 emojis are not going to be enough.

Emojis are a quick and easy way to express a feeling. Brands would be foolish to not utilize them to to convey their messages as well as understand consumer sentiment.

Yes. Emojis have become just another way to rapidly express our feelings without having to type more words. Best yet, they offer an alternative without misconstruing the writer’s meaning. However, with that being said, using emojis in formal writing and any type of non-correspondence is inappropriate.

Braintrust
"As a professional communicator, I find the corporate use of emojis both fascinating and frustrating."

"Like it or not, people spend with brands that speak their language and emojis are part of this (especially via SMS and social media)."

"I think I am too old for this discussion."