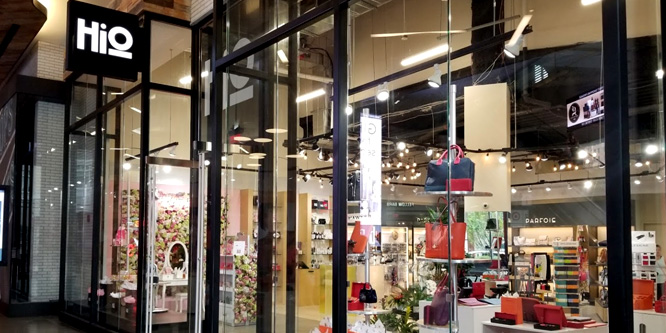 If shoppers are looking for something they’ve never seen before in the brands they buy, then Brooklyn’s new HiO might have what they’re looking for. The new retailer brings together eight brands from overseas (and one U.S.-based brand), some of which have never appeared in the U.S. until now.

HiO launched in downtown Brooklyn toward the end of the summer and, as reported on CNBC, comes at a time when foreign brands still see the U.S. as the biggest potential market for growth, but are skittish about taking big steps given the wave of store closures seen here. Co-founder Sever Garcia pointed to similar retail concepts abroad that ease the move of foreign brands into new markets and said consumers are “hungry for newness.” The brands found in HiO vary in category; customer can find women’s accessories, embroidered bags, travel items, sunglasses, candles and oil diffusers, makeup and notebooks.

The concept bears some similarity to other recent headline-making retail concepts, which have provided space for multiple brands — either permanent or rotating — around a particular theme.

Earlier this year in NYC, for instance, a pop-up retailer called Consortium launched a concept dedicated to customizable health and beauty products.

Bigger retailers have been exploring the model, as well. Earlier this year, Macy’s launched its pop-up concept, The Market @ Macy’s, and began leveraging b8ta, a platform that allows otherwise online-only brands to find a place in-store on Macy’s shelves.

And the Roosevelt Field shopping mall in Long Island has had success with its Edit @ Roosevelt Field pop-up space, dedicated mostly to a rotating lineup of online-only brands.

In fact, the HiO concept had run previously as a part of the popular Edit @ Roosevelt Field pop-up space according to CNBC. The creators of HiO envision the concept as filling empty retail real estate elsewhere in the U.S. They did not indicate if the same overseas brands now in the Brooklyn location would appear on the shelves of other HiO stores or if each proposed location would have its own assortment.

DISCUSSION QUESTIONS: Do you agree that American consumers are so “hungry for newness” that they’ll frequent stores such as HiO? Do you think this or similar concepts will work outside of New York?

Please practice The RetailWire Golden Rule when submitting your comments.
Braintrust
"It will be very interesting to see how department stores evolve once they integrate some of these elements to their outdated stores."

"Love this place. It’s what department stores used to be until they got lost in their own scale."

Love this place. It’s what department stores used to be until they got lost in their own scale (greedy?).

What better testing ground for retail innovation and creativity than the beautiful melting pot known as NYC? This is an outstanding idea, as it brings the theater and transporting journey back to the shopping experience, which has been lost over the past 30 or so years due to the mass merchandising, and commoditization of the department store.

Retailers such as HiO bring a newness and inspirational content that quenches our thirst. Customers will frequent these stores, including STORY and other experiential focused retail formats. It will be very interesting to see how department stores evolve once they integrate some of these elements to their outdated stores. The question that remains is, with the scale and reach will the uniqueness dissipate in a department store setting?

I just don’t see how this is profitable unless it is like Story where they get the money for the product upfront. I don’t buy that consumers want to essentially go into a bunch of unknown brands looking for unknown products. We already had Sharper Image and look how that ended up.

Completely agree. However, imitation is the greatest form of flattery! Copying or “leveraging” concepts has been happening since the dawn of mankind.

We disagree on imitation. It’s not the greatest form of flattery when it happens to you.

I think all active shoppers like to look for new treasures they may have never been aware of. And success in that respect can create loyal repeat customers. In that regard this is a great move. However I agree with Bob Phibbs: my concern is that retail is all about turn and square footage profitability. On the other hand, it will be fun for consumers.

Consumers are curious — they will try it out, and without dramatic difference from other experiences, they will stop trying it out. NYC is a logical place to launch HiO due to sheer volume and customer diversity, so it may succeed even without distinction. However, I’m not convinced it’s scalable. What is interesting is the extension of the store-in-store concept to collaborative real-estate leasing and providing new brands an entry point into US markets for international brands. Need to watch this.

As evidenced by the recent growth in custom apparel and new chains focused on custom designed and sized clothing, consumers want to have uniques items that nobody or very few people have. Offering new products that haven’t been previously available to consumers in the U.S. is a smart strategy that will resonate with consumers that want to be the first to have the latest new products.

This concept should be a success in most major metropolitan markets that have a substantial sized demographic group that resonates with this concept. Customizing the assortments to each regional market will help improve demand.

I actually did go to the HiO pop up at The Edit in Roosevelt Field. It was for “field research” but I ended up making a few purchases. 😉

The current consumer preference for discovery and for not-widely-available product is a result of consumer becoming exceedingly bored with being served the generic same-old-same-old merchandise by department stores.

HiO’s offering was interesting and did quench that thirst for discovery. Like a great modern museum store would. Or when you shop while traveling abroad. But, in the end, it’s just a store.

Braintrust
"It will be very interesting to see how department stores evolve once they integrate some of these elements to their outdated stores."

"Love this place. It’s what department stores used to be until they got lost in their own scale."