How far should brands go with functional packaging? 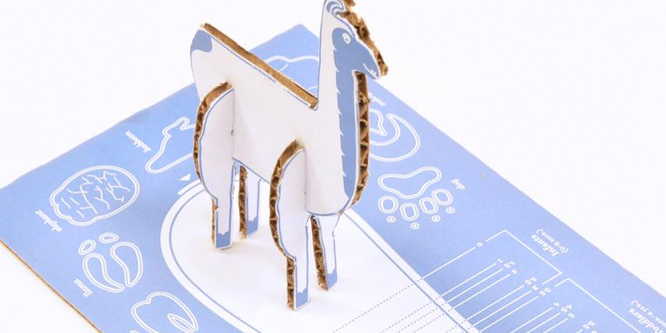 The slick, ergonomic style of Apple’s product packaging is an obvious go-to reference for packaging doubling as an experience. But other companies have begun to approach the concept of experiential packaging from a slightly different perspective. Shoe e-tailer Zappos, for instance, recently ran a promotion that encourages customers to make use of the cardboard their shoes are shipped in.

In June, Zappos ran a campaign called #ImNotaBox, which involved shipping boxes printed with a variety of templates for cutting and folding the empty packaging into a number of new functional items, according to Adweek. By following the instructions, recipients could give a Zappos box a second life as a smartphone holder, geometric planters and a decorative 3-D llama, among other things.

Zappos’ campaign speaks both to the importance of retailers finding new ways to provide experiential enjoyment beyond just the product being purchased, and to the serious look that retail is taking at promoting waste reduction and reusability.

Zappos isn’t the only retailer trying to make what would otherwise be throwaway packaging less disposable, though there has been less experimentation domestically than there has been abroad. Last year, Pizza Hut in Hong Kong released a specially-designed pizza box that converted into a projector for displaying smartphone movies. Last month, KFC in India released a tech-enhanced meal box that allows people to charge their USB smartphones.

Amazon, while it hasn’t done much with functional packaging, has taken some steps into making its packaging part of the shopping experience. Last year, in conjunction with the release of the Minions movie, Amazon began shipping some items in yellow boxes designed with images of characters from the film.

A Progressive Grocer article indicated that, for 63 percent of customers, reusable packaging is a factor when customers are determining whether or not to buy an item.

DISCUSSION QUESTIONS: Is packaging that enables engagement from customers a good use of a brand’s resources? Will creative uses of packaging as seen in Zappos’ experiment become an expected part of CPG and retailer branding? What type of products would be most conducive for such packaging?

Please practice The RetailWire Golden Rule when submitting your comments.
Braintrust
"The intention is probably admirable, but much of this is like the toy in a kid's meal."

"Folks have been storing stuff in cardboard shoe boxes for well over a century. (I looked it up.) "

"I’d bet that far fewer people actually use these gimmicks than marketers believe."

12 Comments on "How far should brands go with functional packaging?"

Brand promise should always be transparent. If it is noticed and extraneous, it gets in the way of meaning and importance. What makes Apple’s packaging so great is that while coveted by customers it is not noticed as anything other than authentic Apple. It is such a model of identification that most customers KEEP the Apple packaging as if it were a jewel. To be a persuasive brand it is important that your claim be seen as authentic and not as marketing mumbo-jumbo. Anything that brings attention to the form that is not inherent in the function is at its best unproductive and at its worse destructive. We should be careful in the development of packaging. Different must be both different AND better. Too often it represents marketing gone amok and screams of pretense and therefor lacks the authority of authenticity. The medium (packaging) is an important part of the message. As such, it must be an extension of the brand’s promise. Outrageous packaging is a poor substitute for important meaning. Marketers would do better… Read more »
4
|
0
-   Share

Excellent. Would have given you two thumbs if I could Tom. And thanks for alluding to arguably our most famous Canadian philosopher. The medium is still the message.

When the cost to create and print engaging packaging is minimal, then of course it’s a good use of the brand’s resources. If the cost is relatively large, then do the research to see if it makes a difference. A virtual reality test for CPG products or an A/B test for online shopping are inexpensive ways to determine the potential payback for innovative packaging.

And caution regarding the Progressive Grocer study. It’s very rare that we have products that are equally evaluated, leaving sustainable packaging as the differentiator. That’s why we have marketing — to create differentiation, whether it is real or not.

The big question is that, while something is reusable, is it actually reused in any meaningful way? And what qualifies as “engagement?”

The intention is probably admirable, but much of this is like the toy in a kid’s meal. The engagement lasts what … 60 seconds and then it’s more plastic into the landfill. More meaningful would be that the shoe box could be cut into pre-addressed postcards kids could write on and mail to the troops or into a coupon for a free cup of coffee you give to a homeless person.

Finally, I’d advocate for chemical-free packaging both in the material itself and in inks used. That would engage me.

Any initiative that enhances the experience, and this is a form of surprise-and-delight, is worth an investment. E-commerce companies and brick-and-mortar retailers are pressured to continuously come up with some form of differentiation because the competition is plentiful. If packaging is one of those points of differentiation, do it. It is a very good innovation. Eventually, most CPG companies and brands will have developed some iteration of the concept.

Packaging is integral for every brand because everything communicates. The only universal right answer is to always reinforce your brand DNA.

Anything that creates an opportunity for a customer to talk about your brand in a positive way is a good thing. A brand today is quite simply what your customers say about it to their contacts and network and if they are talking about it they are engaged. This is a fantastic touchpoint opportunity for a brand. However, because having other uses for the packaging is an innovative thing, they will need to keep changing it and coming up with new ideas to keep it relevant and talked about. Overall, yes why not! Brands are meant to be talked about.

There is a lot of buzz and sharing on Facebook in the last couple of days about transforming glass beer and liquor bottles into drinking glasses. I would expect to see some of the brands starting to promote this. See more here.

I’d bet that far fewer people actually use these gimmicks than marketers believe. If you can’t do it with a bright, distinctive and informative package, don’t just go adding more crap to the landfill. A little box for my cell phone? Are you kidding me? And while I’m at it, yesterday I received the two toothbrush heads I ordered online from Phillips. In a 12x12x12 box, with those little air-inflated plastic pillows. The toothbrush heads themselves were in bomb-proof blister packs. I was tempted to fire up the chainsaw. As online ordering explodes, this is the kind of “packaging” that also deserves attention. I’d be reluctant to order from Phillips again.

Gimmicks do not sell products. Sure we all like promos and they are interesting to talk about or create a PR buzz, but ultimately, a retailer must provide value in their core product to satisfy a customer. Unless there is a quantifiable lift in sales, I would put this in the discretionary budget.

Oh how cute: Zappos takes the adage “everything I need to know I learned in Kindergarten” literally, and runs with it…. But I don’t think their packaging is really more reusable than that of anyone else, and people can usually find a (re)use for a box themselves if they want to make the effort (many use them to ship things they sell on eBay). A more meaningful step, of course, would be to minimize packaging, and avoid the reuse quandary in the first place. But that often involves tradeoffs — surprise! — with ease of shipping and the safety of the items in transit.

Folks have been storing stuff in cardboard shoe boxes for well over a century. (I looked it up.) They are a triumph of functional design. How many of us are old enough to remember making dioramas out of shoe boxes in elementary school? Some white glue; a little plastic dinosaur; some leftover Easter grass; voila! Perforated cardboard packages that can be converted into whimsical toys or art are fun too, but not a strong reason to buy the product inside. Those un-openable welded plastic blister packages, however, are useless for any secondary purpose except cutting your fingers. They are a good reason NOT to buy what’s inside. Functional packaging is not exactly a new idea. The old Barnum’s Animal Cracker boxes came with a string handle and lively decorations that gave them temporary play value. And don’t forget those single-serve cereal cartons, with the flaps that punch out of one side so you can make a “bowl.” Adding electronics seems a little weird on first thought, but then again, those greeting cards that play music… Read more »
1
|
0
-   Share

Braintrust
"The intention is probably admirable, but much of this is like the toy in a kid's meal."

"Folks have been storing stuff in cardboard shoe boxes for well over a century. (I looked it up.) "

"I’d bet that far fewer people actually use these gimmicks than marketers believe."