How high can thredUP grow? 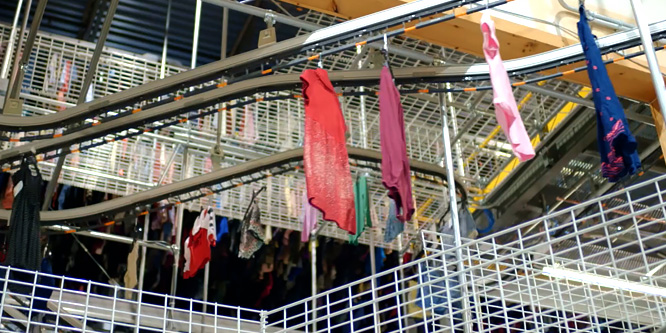 It’s good to be thredUP. The online consignment shop and thrift store posted results that exceeded its own internal expectations as well as Wall Street’s, and the signs are promising for continuing growth opportunities ahead.

The company, which concluded a successful initial public offering in March, posted revenues of $56 million, 15.2 percent higher than the same period last year. Orders placed on the site were up 18 percent year-over-year as thredUP attracted 1.29 million buyers, a 14 percent gain. ThredUP reported that it saw sales improvements month-to-month in the quarter with repeat buyers accounting for 80 percent of orders and first-timers representing the balance.

Gross profits at thredUP were up 71.3 percent boosted by increased revenues coming from consignment sales, greater overall scale plus efficiencies gained as a result of a new distribution center in Georgia.

Co-founder and CEO James Reinhart said on an earnings call yesterday with analysts that thredUP expects to bring another DC online by the middle of next year.

“Keep in mind that every facility we build tends to be larger and more automated than our previous facilities. Size and automation translates into increased revenue capacity and higher operating margins,” he said.

Mr. Reinhart cited factors and forecasts that all point to growing success for thredUP.

He referenced GlobalData research that expects resale to grow at 25 times the rate of traditional retail in the coming years. The eco-benefits of resale are among the motivating factors for buyers in the key Millennial and Gen Z demographics.

Ultimately, thredUP’s success will be determined by its access to goods and its ability to assure quality and expedited turnaround times for both sellers and buyers.

ThredUP expects to eventually process a billion items for resale every year, up from just over a million last year. “We are confident in the long-term supply opportunity,” Mr. Reinhart said.

The company is “relentlessly investing” in tech and software to quickly move through its “rigorous 12-point quality inspection” process and grow its inventory, according to its CEO.

DISCUSSION QUESTIONS: Are you more bullish or bearish on thredUP’s future growth prospects and its ability to become profitable? What do you see as the biggest challenges and opportunities for the online consignment shop and thrift store?

Please practice The RetailWire Golden Rule when submitting your comments.
Braintrust
"ThredUP is doing better, but the numbers hide more than they tell."

"Sorry, I still don’t get this excitement. “The Adjusted EBITDA loss was $9.1 million.” How about start with profitability?"

"Let’s hope now that they are public, they don’t lose their way and focus on profitability. They should be following Amazon’s growth model."

16 Comments on "How high can thredUP grow?"

I am bullish on thredUP’s future and the consignment/used category in general. There are many operational challenges of operating this type of business at scale, and while progress has been made, it will get a lot more efficient and ultimately more profitable as it evolves. The category also resonates with a younger demographic with entirely different views and acceptance around the value of buying used goods. The biggest challenge remains acquiring a good supply of quality goods and the operational challenges of processing, selling and managing this unique inventory. But as thredUP has shown, this can be scaled.

I think the number of full price retailers who have partnered with ThredUP, like J.C. Penney and Macy’s even, point to how much the company is disrupting the industry. But I am still skeptical on how easy it will be to become profitable. I would be interested to learn more about how they go about deciding how to pay customers who sell their clothes to ThredUP – the handling costs are always going to be high and difficult to bring down. So their ability to make money is going to be dependent mostly on how much they have to pay to get clothes, and how much they can really do to get a better price from consumers in resale. The more efficient they get, the more it encourages people to participate as a seller – oversupply could end up keeping prices depressed.

As yesterday’s results from both thredUP and Poshmark show, resale is growing fast – even in a market where apparel sales remain somewhat suppressed. This is driven by a range of factors from people looking for cost savings, shoppers enjoying the thrill of finding unusual (and vintage) products, and sustainability concerns. The number of people involved in the circular economy continues to grow and that rising tide will lift all boats. That said, the space is becoming more crowded. Against that thredUP will hold its own, mainly because it has a balanced assortment of middle-market and more expensive garments, and because of the partnerships it is forging with traditional retailers.

ThredUP is doing better, but the numbers hide more than they tell.

Mind you these are operating losses. Not because of some depreciation based on heavy R&D investment that will pay in the future.

The reason for operating losses is because they are not classifying the product cost correctly.

Each item that ThredUP handles needs to be cleaned up, categorized, and made ready for resale. They do not put this under the product cost. Therefore the contribution margin is shown very high, along with gross profits. If the total product cost is classified correctly, it would be nowhere near attractive — not now, not in the near future.

Re-commerce is a big market. And ThredUP is positioned well from a strategic point of view. But it is not operationally making it work just yet.

There is one number that stands out in Mr. Reinhart’s presentation. It is what every company would wish for: “with repeat buyers accounting for 80 percent of orders …” Give any company 80 percent repeat buyers and you have an outstanding future.

Let’s hope now that they are public, they don’t lose their way and focus on profitability. They should be following Amazon’s growth model. Build systems, build processes, build infrastructure now. It may make the P&L look bad in some eyes, but it creates a high leverage business that ultimately will deliver big time bottom lines year after year.

Color me bullish. The ongoing question for retailers seeking to stay on top of innovation is, “buy, build, or bridge?” thredUP’s platform is so compelling that multiple retailers are happy to hop on the bridge-building train to take part in the upcycling movement. Retailers aren’t demanding exclusives (if only because thredUP holds the cards), allowing thredUP to pursue enumerable partnerships with competing retailers. This free-to-roam dynamic will drive growth for thredUP, particularly as retail turns a corner. Big bridges to big payoffs.

Sorry, I still don’t get this excitement. “The Adjusted EBITDA loss was $9.1 million.” How about start with profitability? In any other century would a company like this be able to crow?

#notthesame and I stand by what I said in that case that they would become a monopoly.

Sustainability is probably one of the biggest macro trends impacting the apparel industry with Gen Z leading the way. The industry is responding in one or more of three ways: more ownership of the value chain to drive elimination in excess production, producing fewer products that are more durable and lasting longer, and working with companies like ThredUP to give used clothes a second, third or even fourth life. Based on that, I feel very bullish about the model that ThredUP has pioneered. The biggest challenge they face, in my opinion, is to get penetration across other cohorts like Xers and Boomers.

thredUP’s growth will continue to skyrocket as they push their RaaS (Retail-as-a-Service) model. As they increase their partnerships, their access to products including excess inventory will continue to build on their growth.

The challenge will be with other resale platforms like Poshmark, TheRealReal, and Vestaire Collective also scaling at the same time as well as brands building their own story on circularity. thredUP is not the only player out there offering the technology to make resale a reality for brands and maybe they are just a bit too cheeky to admit it.

Future growth prospects? Color me bullish, for sure. One look at their repeat business tells you they are exceeding shopper expectations and building loyalty in a market that’s projecting serious growth for years to come. But profitability? I’m not so confident. Automation and efficiencies will only reduce their baked-in logistics and handling costs so much.

I love the whole premise of thredUP and what the business model could mean for the second-hand market. I am incredibly impressed by the infrastructure it must take to keep track of the vast array of inventory they hold. But these early numbers make me skeptical. High margins are not necessarily impressive when there are equally high inherent handling and processing costs. Color me hopeful, but skeptical.

I think this could be a very successful business model. It’s certainly spot on trend, it’s about sustainability and re-use — attributes that are very important in the market today, especially in younger segments. The big hurdle in my mind, and they seem to be handling it well at the moment, is their supply chain. How do they continue ensure a reliable flow of desirable products to meet demand? Not every used garment is created equal.

No question that the second-hand market and resale for apparel, in general, is on-trend right now and interest is growing! ThredUp is well-positioned for this, but the question is how do they become profitable? Does the cost model really work for this business, and how many players will the market support?

I particularly took note of the comment about becoming the infrastructure for the Internet for the resale market. Becoming the go-to platform for resale has to be the goal — bringing both suppliers and buyers together via their platform, wherever the access point may be for the consumer — a brick and mortar retailer, e-commerce site, thredUp’s own site, etc.

Overall I’m bullish, but concerned about how long it will take to get there.

I am bullish on thredUP but not for long. I suspect a rise and plateau sooner and longer than most brands. The resale appeal has been proven in recent years, no doubt boosted by home-bound consumers last year, but eventually there will be something else to entertain consumers and steal share of mind. This market has heavy appeal to Gen Z where many are still finding their way to their first pay checks. Not that resale won’t be interesting then, but they will have a lot more options.

Braintrust
"ThredUP is doing better, but the numbers hide more than they tell."

"Sorry, I still don’t get this excitement. “The Adjusted EBITDA loss was $9.1 million.” How about start with profitability?"

"Let’s hope now that they are public, they don’t lose their way and focus on profitability. They should be following Amazon’s growth model."