Is a labor storm developing at retail? 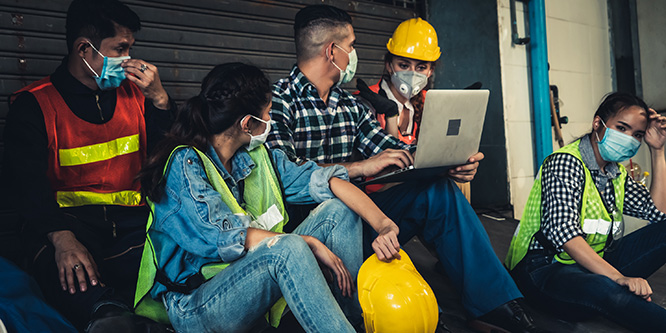 Management and labor unions have been at odds with very few exceptions for as long as the two have been around. This has certainly been the case in the retailing business. The question right now, however, is whether nonunion frontline workers have been made to feel more disposable during the novel coronavirus pandemic and if they will turn to collective bargaining agreements in an effort to seek safety in numbers.

A report issued by the Bureau of Labor Statistics last week found that the total number of union members in the U.S. fell last year by 2.2 percent compared to 2019. The percentage of all workers with union cards, however, rose by half a percentage point to 10.5 percent in 2020. The federal agency explained that this apparent contradiction reflects greater job losses among nonunion workers, primarily those in low hourly wage positions in hospitality, leisure and other industries.

The BLS findings may or may not point to a perfect storm, of sorts, coming the way of retailers. The industry directly employs 32 million people, according to the National Retail Federation, which along with other organizations representing retailers points to the business as an entry point for employment in the U.S. while offering those looking to build careers a wide variety of advancement opportunities over time.

Conflicts between workers and management have been placed in a more contrasting light since the pandemic hit. Issues of working conditions, racial equity, income disparity and job security have grown even more prevalent at a time when “essential” retailers have produced record financial results while those designated “non-essential” have had to revert to furloughs, layoffs and reduced man hours in an effort to balance demand with operating expenses.

NEW YORK IS A UNION TOWN! Thanks to all our sisters and brothers in labor for standing with the Hunts Point Market workers of @Teamsters Local 202. The workers who feed NYC deserve a fair wage! #1u pic.twitter.com/NLsUwhNx4p

Some retailers with nonunion workforces have raised starting wages to $15 an hour, but even that is no guarantee that some workers may not turn to unions. A case in point is a vote scheduled next month at an Amazon.com warehouse in Alabama when workers will decide if they will be represented by the Retail Wholesale and Department Store Union. Employees at the facility approached the union in response to productivity tracking measures put in place by the e-tailing giant. More than 2,000 of 5,800 employees have signed cards calling for a vote.

DISCUSSION QUESTIONS: What is your forecast for labor relations between retailers and their frontline workforces in 2021 and beyond? What impact, if any, do you think the passage of a higher federal minimum wage would have on employer/employee relations?

"Income and worker benefit disparity is very real in the U.S. Few if any in charge have likely experienced the reality of living on retail wages with no benefits."

"Retailers need to be cognizant of their own teams and pay close attention to what’s happening in the labor market."

12 Comments on "Is a labor storm developing at retail?"

Labor is a potential flashpoint in 2021. Most retailers already face a lot of cost increases and some (though by no means all) have had their balance sheets severely damaged by the pandemic. As such, they don’t really want to drive up labor costs by too much. On the other hand, a lot of employees feel they have risked their lives to work during and want better compensation and conditions. A balance needs to be found between the two. And it does need to be a balance: retailers can’t do nothing at all, and it is often not reasonable for all union demands to be met.

The pandemic has exposed a number of festering labor issues and there have been some changes to the way frontline workers are being treated, however, I don’t believe that the fundamental dynamics in the relationships between frontline workers and management will dramatically change. And while there’s no doubt that the passage of higher federal minimum wage will I impact retailers – the largest of which can more easily manage the extra labor costs – unfortunately, smaller businesses will struggle with this.

There will no Battle of the Overpass, but labor will demand to be heard.

For the last half century, union membership has declined, not because workers didn’t want unions, but because companies moved to new geographies to start greenfield operations that didn’t include unions. The new workers understood that is why they were now getting jobs and did not push for unions.

Perhaps it is time for the trend to change, not only because of what workers feel, but because many companies are realizing they don’t exist without their labor.

Let’s not forget we now have an administration that is already tearing down anti-organizing roadblocks, and sees worker protection and participation as essential for the economy’s long-term resiliency (as well as our collective physical health.) I look forward to seeing new kinds of networked/digital labor organization in the After Times as well, not just the traditional union model as that doesn’t work effectively in every situation.

I fully agree! It is only a positive for the health of the economy.

This article in today’s Adweek newsletter hints at what a digitally-mediated labor organizing resource might look like, if this organization took the next step at negotiation and representation on behalf of its clientele.

I don’t pretend to know the future of unionization in retail, but it’s obvious that the retail workforce has never been more essential, and the retail workforce is well aware. To their credit, retailers have stepped up recognition and compensation, and should continue to do so.

I was raised in a small farming community where the general philosophy was that a worker had to earn their right every day to come back to work tomorrow. This probably biases my opinion, but overall, I recognize that many workers have taken risks this year and might feel they have not been properly compensated. On the other hand, those people continued to receive paychecks. What is clear to me is that brands have responded very differently in how they treated their employees in 2020 — with those that value their team members and share values overall seem to be avoiding problems, whereas those brands that have treated their human resources as a resource (and not people) are probably in for a tough time. If we look across industries over 5-8 decades, those companies that frequently had labor disputes have mostly disappeared, or tend to have very cyclical EBITDA, while those businesses without major labor issues (and often unions) tend to be less cyclical. At the end of the day, a fish rots from the… Read more »
2
|
-2
-   Share

I believe that we’ll see more discord in the labor market in retail this year. The push for a higher minimum wage has largely been driven by retail and food service workers. Now I suspect union organizers will feel more empowered and their target audiences, retail and service workers, will be more receptive to messages about the key role they play during the pandemic and their contribution to the record performance of many big box stores and grocers. Retailers need to be cognizant of their own teams and pay close attention to what’s happening in the labor market.

There could be some interesting times ahead. In 2020 we saw Lidl and McDonald’s in Germany share staff in a collaborative manner.

Many will feel that retail workers have been alongside healthcare workers at the front of pandemic response, making wage increases seem highly relevant.

Wage increases are likely to add further headwinds in terms of margin pressures that retailers need to deal with.

In the 2010s, retailers could hire labor without benefits under the umbrella of the 30-hour workweek. A double negative requiring many retail employees to take second jobs just to make ends meet without any eligibility for employee assisted healthcare. A heavy lift for low-income families and their children.

The minimum wage conversation is a deflection providing cover to retail corporate types protecting shareholder value. Income and worker benefit disparity is very real in the U.S. Few if any in charge have likely experienced the reality of living on retail wages with no benefits. Passing a higher federal minimum wage is a start, not an end.

While some moves towards a stronger union environment are motivated through the selfish ambition of their leadership, the outcome of longer-term trends is grounded in worker treatment.

For several years, larger employers including UPS, FedEx, Walmart, Amazon, etc. have walked a think line where they offer essential employment to people who need it, often in seasonal jobs, but structure the system to limit benefits and a more fulsome opportunity. Whole Foods recently announced it would shorten paid breaks from 15 to 10 minutes. Workers were upset and who can blame them. It’s hard to walk to the restroom and back in 10 minutes, much less take a work break.

If larger employers truly value their workers, they will find a way to legitimately offer compensation and benefits that satisfy core needs. If that happens, the value of union protection is minimized.

I’d say the future of this discussion lies in the boardrooms of these large employers.

"Income and worker benefit disparity is very real in the U.S. Few if any in charge have likely experienced the reality of living on retail wages with no benefits."

"Retailers need to be cognizant of their own teams and pay close attention to what’s happening in the labor market."