Is inflation the biggest back-to-school story? 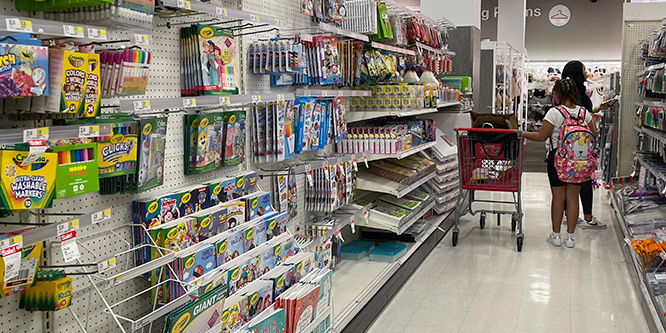 Deloitte, KPMG and Mastercard all issued “Gold Star” back-to-school spending forecasts in the range of 7.5 percent to 20 percent, attributing spending increases in part to inflation.

The widespread return to classrooms in 2022 is expected to revive categories related to social interaction, such as footwear and apparel, along with traditional supplies.

Whether hybrid learning will alter back-to-school spending going forward will be closely watched as many schools still deploy some digital content.

Supply chain disruption could return as a factor frustrating back-to-school shoppers. In Deloitte’s survey, 63 percent of respondents said they expect stock-outs during the back-to-school season.

Inflation, however, was the big topic explored in surveys taken over June and July.

NRF’s analysis found that among back-to-school items, the biggest price increase from 2019 to 2022 was seen in stationary (up 21.8 percent), followed by furniture & bedding (up 21.1 percent) and footwear (up 9.9 percent).

NRF found that back-to-school remains an “essential category” with 38 percent of parents cutting back in other areas to cover the cost of items for the upcoming school year.

A Bankrate survey concluded that the primary way back-to-school shoppers plan to offset higher costs was by seeking more coupons, discounts and sales (54 percent), buying fewer school items  such as supplies, clothes, etc. (43 percent), shopping for cheaper brands (43 percent) and stretching the items they currently have for another year (39 percent).

Surveys showed some parents expect more deals this year due to the elevated inventories at many stores.

Matt Kramer, KPMG National Sector Leader, Consumer & Retail, KPMG LLP said, “Despite concerns about inflation, resilient consumers plan to spend more on back-to-school items this year. While shoppers expect to pay higher prices, many will return to the store in search of the best deals.”

DISCUSSION QUESTIONS: Do you agree that back-to-school is largely an “essential category” and somewhat immune to inflationary pressures? Will promotional activity, in-person classes or out-of-stocks likely be a bigger factor influencing the back-to-school season?

18 Comments on "Is inflation the biggest back-to-school story?"

I do think that many back-to-school items are categorized as “essential” by most parents who are able to do so, and parents will find a way to spend cash on their kids again this year. With Amazon’s Prime Day event becoming the unofficial start to the BTS season, I have come to look to their results as a bellwether for the season. With Amazon’s results being relatively flat against last year, I expect NRF’s prediction of the season being somewhat flat as well will end up being pretty close to correct. Which I consider a positive outcome, given the inventory and inflation headwinds we are facing.

That’s a great metric, Dave. I hadn’t really thought much about Prime Day as a BTS indicator, but I think you’re probably right.

Thanks, Gary! It sure seems to be fairly reliable….

I strongly suspect that, like the oil companies did, brands are raising prices because they think they can. This puts retailers in a bind and forces consumers to make difficult choices. I don’t envy parents during this BTS season.

Back to school covers a very broad range of items which vary based on the age of the individual going back to school. I expect most parents will try to save where they can but will try to ensure that their children will have what they need for BTS whether it is pens or pants or a new laptop for the college-bound. The items will be viewed as essential from the child’s point of view even if they are not by the parents.

Because kids grow, even “discretionary” categories like jeans and shoes become essential at this time of year — it’s not just about backpacks and school supplies. There is inflationary pressure across the board, but there is also an effort by retailers to protect their market share through selective price promotion. Shoppers who are paying attention to loss leaders (and to the media stories about how to save a buck during BTS) might be able to navigate the season without too much damage to their bank accounts.

BTS certainly has essential elements about it. But there is also room for parents to exercise discretion within price points and the range of novelty items that may have been included in prior years. Total spending may rise but the real telling of the tale will be in the details.

I agree that back-to-school is essential and I think though it might often seem like a little bit of a cash drain to splurge on new shoes, clothes, accessories, etc – there is certainly a long-term positive to creating an environment where kids are actually excited to be back in school and learning. In-person classes mean that the social/educational seesaw to school will be back in full motion and will be a primary driver of purchases.

I do believe that BTS is essential as parents will find ways to get their children what they need for school – even when it is not easy. It isn’t, however, immune to inflation, because inflation inherently takes more money out of budgets by using it on gas, groceries, etc. which will impact BTS on the margins and lead to some shifts in behavior (i.e. buy a cheaper notebook or use your backpack one more year). Oddly enough though, the actual inflation in BTS categories YoY is quite small (per U.S. Bureau of Labor CPI) with boys apparel, girls apparel, boys and girls footwear, educational books and supplies and video and audio products all having somewhat negligible inflation (and in some cases deflation). This means that most BTS budgets will still get as many items as they once did if the right offers/decisions are made. I do agree with Dave that Amazon Prime Day is a good bellwether for BTS once one considers some key caveats. Ultimately, I do think the return to the classroom… Read more »
5
|
0
-   Share

I shopped the Target Back-to-School section yesterday at the Roseville, MN flagship (“T1”) and compared it to two weeks ago and four weeks ago. The selection of basic consumables like notebooks, pencils, and office supplies, and durables like backpacks, did not start off strong with many gaps across the gondolas in early July – and many sections nearly empty yesterday. There was a distinct absence of markdown flags as well. Several aisle displays are loaded up with 3M Command hooks to give the appearance of selection but I know those will get recycled into Halloween and Christmas planograms. So that’s why I chose out-of-stocks as the influencer – can’t sell what you don’t have.

BTS represents essential shopping. However there exists the option of trading down on many back-to-school items to cope with inflation. Kids are actually going back into school in many parts of the country and parents want them to look good and be outfitted accordingly.

Being the vast majority of kids will return to school in person, and a number of families took summer vacations after being isolated the past two years, we likely see a late rush on school supplies just before classes begin.

It will be interesting to see what inflationary pressures does to family decision making. Gut says they will arm the kids with whatever they need, regardless of price increases, because the timetable is winding down awful fast.

Back to school as a mega category is essential because parents want to provide the best opportunity for their kids to succeed and be ready with the right clothes and school supplies/tech. Parents are wise and digitally savvy and will likely gravitate to the lowest price leaders this year to ensure that they get a good deal so I expect the price leaders will gain share. With two weeks before school here in So. Cal, I don’t see an inventory issue in this region, so I think price comparison and mixing in-store with online shopping — and — not cutting back will be the BTS theme.

It’s always curious when the NRF has the most conservative forecast for a consumer spending season! Yes, BTS has many essential product categories within it where parents have no choice but to buy what the school supply list demands. However, there is room for parents to trade down in brands to lower costs in some cases. This is especially true in apparel, and it will be interesting to see which retailers benefit from this the most. For example, will we see increased apparel sales from mass merchandisers like Walmart and Target and off-price apparel brands, or will kids demand trendy brand names? The same may happen in typical consumable school supplies like markers, paper, etc. That is where we will see the impact of inflation versus just looking at the raw sales figures.

I would agree that BTS is an essential category, and it’s somewhat immune to inflationary pressures because a child’s BTS change according to age/grade — so there’s no annual comparison.

Technology has changed the way children learn and directly affected the BTS shopping experience. I anticipate a more dramatic change in the horizon as adoption of new practices grows.

Inflation is a big story regardless of the category. Yes, school supplies are an “essential category,” and like other essentials, the consumer can’t “not buy” school supplies. However, that doesn’t preclude the consumer for looking for deals, reusing old supplies, etc. The sales will be there. The effort to find better prices will also be there.

We are aware that back-to-school items are definitely not discretionary and are considered essential. Therefore, demand for such products will increase but it will still not reach pre-COVID-19 levels. However the stock-out problem caused by supply chain issues seems like a bigger challenge. This is especially true given the ongoing Ukraine-Russia War and U.S.’s never-ending problems with China. However retail giants like Walmart and Target hardly suffer the ills of product shortages as these retailers plan their purchase-cycle way ahead of time.

So, I think back-to-school categories will continue to witness a significant demand but we will have to wait and watch how retailers manage to counter the compounding difficulties foist on them.