Is Uber/Postmates a bigger deal for restaurant or grocery delivery? 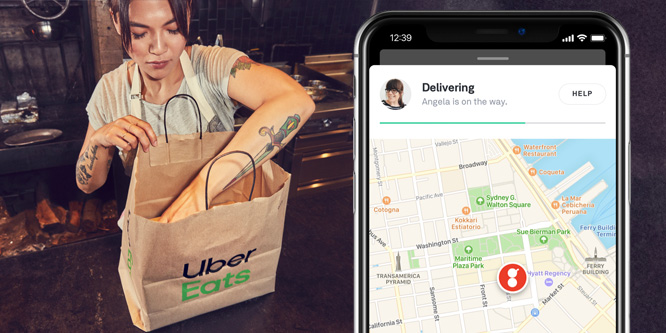 Uber’s move to acquire Postmates is predicted to help the company grab market share in restaurant delivery and significantly expand its capacity to deliver groceries and other staples.

The $2.65 billion deal, expected to close in the first quarter of 2021, comes at a time when demand for restaurant and grocery delivery has surged and Uber’s ride-sharing services have plunged with Americans marooned in their households due to the pandemic. Consolidation among on-demand delivery companies has also been expected.

In food delivery, the combined Uber/PostMates would control 37 percent of the U.S. market, behind DoorDash’s 45 percent, according to Edison Trends. GrubHub, which also owns Seamless, falls to third among major players.

“It’s a big enough market, and there is room for three players to be profitable and to do very well,” Uber CEO Dara Khosrowshahi, told investors. The consumer-facing Postmates app will run separately while “supported by a more efficient, combined merchant and delivery network.”

Uber also gains Postmates’ “delivery-as-a-service” platform that is being offered in several cities and also includes delivery partnerships with Walgreens and 7-Eleven.

Uber launched an option to send packages via its U.S. ride-hail drivers during the pandemic and is offering on-demand delivery with grocers in several countries, including with France’s Carrefour. It’s also finalizing gaining majority control of Latin American grocery delivery service Cornershop, with plans to expand Cornershop in the U.S.

“The vision for us is to become an everyday service,” said Mr. Khosrowshahi, pointing to opportunities in grocery and pharmacy delivery beyond meals. He noted that Uber Eats and its restaurant delivery competitors “are all looking to get into adjacent categories and really looking to power local commerce and delivery to the home.”

DISCUSSION QUESTIONS: Is Uber’s acquisition of Postmates a bigger game changer for restaurant or grocery delivery? How would you assess the challenge and opportunities Uber faces in both delivery areas?

Please practice The RetailWire Golden Rule when submitting your comments.
Braintrust
"To me, the entire restaurant delivery model of Postmates, Grubhub and others is terribly flawed. The chunk of the bill they take from the restaurants is outlandish. "

"There really needs to be some shakeout of last-mile delivery services into a more efficient model. There are too many individuals driving single orders point to point..."

"Either cost of delivery goes down, or the service will not exist as we know it today."

8 Comments on "Is Uber/Postmates a bigger deal for restaurant or grocery delivery?"

Delivery companies are realizing that the delivery aspect is a true drag and they are moving to marketplace model. Grubhub reported a 71 percent margin with customer pickup and 31 percent margin when a driver is involved.

This is basically making local restaurants into one giant restaurant marketplace, very much like Amazon marketplace is for retailers.

I see the Uber/Postmates deal as not so much about augmenting delivery capabilities as the acquisition of diners and restaurants.

As restaurants battle to stay afloat during this pandemic, with states pulling back on inside dining, this deal provides them with another viable means of prepared foods delivery. Food retail has been ahead of restaurants on the delivery front. Therefore the incremental impact of this deal in the food retail space will be marginal.

To me, the entire restaurant delivery model of Postmates, Grubhub and others is terribly flawed. The chunk of the bill they take from the restaurants is outlandish. Today the restaurants feel they must participate, but will they eventually make adjustments on “the package” they ultimately send out for delivery versus the one that they deliver themselves or serve in-house? I see this coming.

There really needs to be some shakeout of last-mile delivery services into a more efficient model. There are too many (poorly paid) individuals driving single orders point to point, which is incredibly wasteful all around. And I agree completely with Gene over the “gouge” factor for systems like GrubHub. So perhaps an Uber delivering multiple orders/picking up passengers and paying its team fairly as they stay busier makes sense.

The third-party food delivery business remains immature and its share of the take is unsustainable for the restaurants (who only lose a dollar or two on each delivery, but make up for it in volume). Gene has that part exactly right.

Creating a separate delivery menu may not be practical for many restaurateurs, whose businesses are already too complicated as it is. In our home we have deliberately avoided using third-party deliveries out of respect and concern for our favorite local operators. Take-out or first-party delivery (with generous tips for both) is the only way we play.

With regard to grocery delivery, I’ve long maintained that third-party shopping services are a poor value for most consumers. I’ve never liked seeing retailers hand over their shopper relationships to expensive outsiders who introduce service errors and substitutions to nearly every transaction.

Third-party delivery of click-and-collect orders fulfilled by the grocer is another matter. Here is where Uber/Postmates may serve a useful role. Delivery pricing must be transparent to the end user for this to be an effective business model.

I am not sure how sustainable long-term these delivery services really are. Plus the costs for the restaurants (or grocery stores if we’re talking grocery delivery options) are too high and therefore not sustainable as well. If the idea is to move into more a pure marketplace model, a la Amazon, then we would envision the restaurant equivalent of a buy button that commodities the food order itself, and forces restaurants to compete for customers on price rather than on the type and quality of their menu. Is that the model consumers want? Somehow I doubt it, but it seems to be headed that way.

The post above talks about the unsustainability of the model. Restaurants and grocers do not have the margin to keep absorbing the cost, and the consumer is not going to be willing to pay for the cost of delivery. Restaurants are also beginning to understand that when consumers order through the delivery service website, the delivery service now owns that customer and not the restaurant.

Either cost of delivery goes down, or the service will not exist as we know it today.

Uber is betting the farm on delivery. Investment in Uber Eats has been evidence, but the Cornershop acquisition — and now Postmates — are the greatest indication. Cornershop in particularly is key as they are Instacart for much of LatAm and bring to Uber significant operational experience, which many will appreciate is more necessary in grocery than restaurant delivery. Watch for the Cornershop exec team to take a more prominent role as Uber leans into Grocery — and adjacent categories — in N. America as it did with Eats. Postmates will be an accelerator, but Cornershop is the key.

Braintrust
"To me, the entire restaurant delivery model of Postmates, Grubhub and others is terribly flawed. The chunk of the bill they take from the restaurants is outlandish. "

"There really needs to be some shakeout of last-mile delivery services into a more efficient model. There are too many individuals driving single orders point to point..."

"Either cost of delivery goes down, or the service will not exist as we know it today."