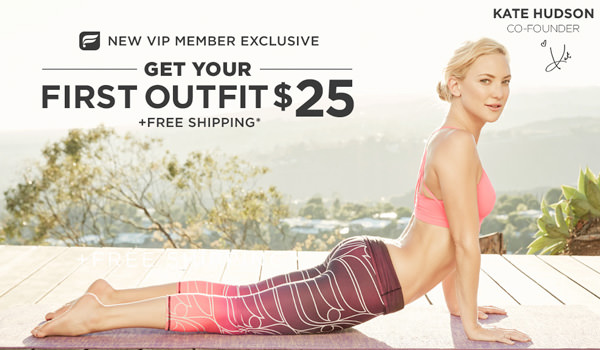 Fabletics, the online activewear brand built initially on the fame of actress and co-founder Kate Hudson, is seeking to become a major brick and mortar force, as well. According to reports, Fabletics, which will launch its seventh store this spring in the Mall of America, is looking to open up to 100 stores over the next three to five years.

According to Forbes, Fabletics generated $150 million in revenues last year, the vast majority through its site. The company has used Ms. Hudson’s celebrity along with fashionable designs, low prices and a subscription program to propel its sales.

With its planned expansion into stores, Fabletics will move even more directly into competition with Athleta, Lululemon and others such as Kit and Ace (the newest venture of Lululemon founder Chip Wilson).

While Fabletics’ rise has gone pretty much according to script, the company has not been without controversy. Subscribers are given the option of purchasing a given item every month. It is up to members, however, to notify Fabletics if they do not want the item. Should they fail to notify the company within five days, they are charged for the purchase. Subscribers being charged for items they didn’t want has led to numerous complaints made to the Better Business Bureau over the years.

The parent company of Fabletics, JustFab, has said that it has made changes to reduce the number of complaints it receives.

“For us, five to 10 complaints is five to 10 too many, but in a typical month we’re sending out 800,000 items,” Adam Goldenberg, co-founder and co-CEO of JustFab, told Forbes. “Largely speaking, customers really like this program.”

DISCUSSION QUESTIONS: What advice do you have for Fabletics as it seeks to migrate its online experience into physical stores? How would you recommend store associates go about selling Fabletics subscriptions to customers in stores in light of controversies surrounding the service?

Please practice The RetailWire Golden Rule when submitting your comments.
Braintrust
"I’m not totally sure — outside of a flagship store and/or some pop-ups — what Fabletics gains by opening physical stores, let alone 100 of them."

"Hold on Kate, let me get my yoga tights on ... there we go. My official RetailWire outfit is on! Key areas for a store: Location, design, learning, service, community Location."

"I just went on the site and took a lifestyle quiz, set up a log-in password and then was offered 59 minutes to buy an outfit for $25. (time is ticking away on that while I post this). My gut is I won’t buy."

I’m not totally sure — outside of a flagship store and/or some pop-ups — what Fabletics gains by opening physical stores, let alone 100 of them.

Of course they will get traffic, improved brand exposure, etc., but they will also get overhead bumps, exacerbated personnel issues, increased shrink and other “little” problems they don’t have to deal with at the moment.

They will also have to change their “opt-out” online sales model. It’s one thing to deal with an angry customer by phone or email,, quite another to have them screaming at your associates face-to-face. I’m just not too sure the subscription models transfers into the physical store experience.

Hold on Kate, let me get my yoga tights on … there we go. My official RetailWire outfit is on! Key areas for a store: Location, design, learning, service, community Location: If I were you I would focus first on store design, a different store design and only open five or so stores in highly-active, highly-online socially active areas (this will cut down on the marketing spend. The twitter freaks and such will advertise for you). Design/Learning: I would suggest a live on-floor class space. Sit and learn and yoga or active exercise classes. Half glass walls around the areas with some glass pillars. Also a sitting area for health classes or new baby mom classes, etc. Also run the store deep with a large inventory space in back and fewer items on shelves or mannequins. Show the assortment but have the sizes in back (similar to Macy’s shoe floor). Also back room space for ship-from-store. Service: Get the right people for the store. Sports-oriented people that wear your styles. Same footwear on all of… Read more »
0
|
0
-   Share

I just went on the site and took a lifestyle quiz, set up a log-in password and then was offered 59 minutes to buy an outfit for $25. (time is ticking away on that while I post this). My gut is I won’t buy.

Ultimately, I prefer to put my hands on fabrics in this category before I buy, it’s a compression thing for me. The site has sizing comments from customers but no real product performance reviews, so I have no sense of performance.

Aside from a few flagship locations, I agree with Ryan Mathews, there are many more good reasons to stay an online business than to open stores and compete with the multitude of retail outlets in this space. The online experience has a lot of room for improvement, so perhaps a focus on that should take precedence.

The category is so saturated, I’m not sure Kate Hudson or her fame make any differentiating impact.

From a business perspective, this is becoming crowded space and, as is always the case, Fabletics will have to find its differentiation points, with an emphasis on the plural!

From an information systems and technology perspective, this is an once-in a-lifetime opportunity to organize the architecture as true omnichannel and not glued together with a spit and a prayer. Given that the internal organization should also be structured as a one-company model and not fractured businesses, the systems to be implemented must be such that they support the new mandated unified commerce concept; one view of the customer, one view of the inventory, one view of all transactions, etc.

Best of luck to Fabletics!

First, opt out subscriptions demand constant attention and activity by consumers. That is not the model consumers prefer. It is easy for the company but may cause complaints and consumers dropping out. Given the challenge retail locations everywhere face, the challenge of the stores will be based upon what experience is created in the store. Is there a reason to actually visit the stores? What is the added value over purchasing online? If those questions are not addressed successfully, the stores may not do well.

Here’s another indication that stores are critically important and Lululemon’s influence is waning. One thing we’re learning about the new retail is that it isn’t necessary to have a store on every corner, but flagship stores in major metros. Watching Fabletics and the new Amazon stores should be very interesting.

The main thing is to do away with the consumers having to notify the company within five days if the product is not wanted. That may have worked way back when book clubs and record companies did it. Not now.

Next: This is an already crowded field. What, other than the celebrity name, makes this appealing?

Physical retailing is making a resurgence in ways never seen before. Look at Bloomingdale’s recent holiday window displays which were designed to arouse all of the human senses and connect to consumers on both physical and digital realms. However, regardless of which channel, or combination of, is being used to deliver products and services, retailers first should focus on how they are going to create an enduring customer experience, as demonstrated by Bloomie’s windows. Similar to how data and analytics have changed the online shopping experience, so too should the mashup of hyper connectivity and on-demand information enrich the consumer’s in-store shopping experience and build loyalty to drive the retail business forward. Moving forward, retailers need to consider how to coalesce consumer paths between physical and digital to meet rising journey expectations, and deliver even more meaningful customer experiences. Doing so will also serve to help address controversies surrounding the Fabletics service model. I think it’s important to examine any point in the delivery of service or experience where friction is happening for the customer.… Read more »
0
|
0
-   Share

Braintrust
"I’m not totally sure — outside of a flagship store and/or some pop-ups — what Fabletics gains by opening physical stores, let alone 100 of them."

"Hold on Kate, let me get my yoga tights on ... there we go. My official RetailWire outfit is on! Key areas for a store: Location, design, learning, service, community Location."

"I just went on the site and took a lifestyle quiz, set up a log-in password and then was offered 59 minutes to buy an outfit for $25. (time is ticking away on that while I post this). My gut is I won’t buy."