Kohl’s is on a roll coming off the holidays 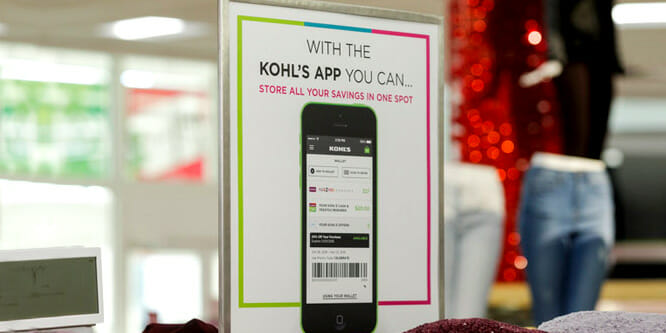 Department store operators went into the 2017 Christmas selling season hoping to put their struggles behind them. Macy’s showed some improvement with a 1.1 percent gain in same-store sales during the last two months of the year. J.C. Penney did even better with its comp sales up 3.4 percent. But it was Kohl’s with a 6.9 percent year-over-year gain for the holidays that has many industry watchers taking notice.

“All lines of business and all regions reported positive comp sales,” said Kevin Mansell, Kohl’s CEO in a statement. “As expected, growth in digital demand accelerated significantly in the holiday period from the year-to-date trend. In addition, we experienced positive sales in our stores driven by stronger traffic.”

Kohl’s has focused on its omnichannel efforts to set it apart from its retail rivals. At Shoptalk last March, Mr. Mansell said the company was focused on tech investments that gave customers the options to shop how, when and where they liked. He pointed to improvements the company has made to its mobile app as a critical piece in Kohl’s strategy.

“Mobile,” he said, “is the driver of behavior when customers come into our stores.”

More recently, Kohl’s made headlines when it first announced the test of Amazon.com smart home shops in 10 of its stores in Chicago and Los Angeles followed by a separate announcement that it was accepting returns for items purchased from the e-tailer in 82 of its locations in the same markets. The moves have led to speculation that Amazon may have its sights set on acquiring Kohl’s following its acquisition of Whole Foods last year.

Kohl’s also made news when it reported that Mr. Mansell will step down next May as CEO after a decade on the job. He is being replaced by Michelle Gass, who joined the company as its chief customer officer with responsibilities over marketing and e-commerce in 2013.

DISCUSSION QUESTIONS: Why do you think Kohl’s is performing better than its department store rivals? Do you expect the chain to continue posting strong numbers in 2018?

Please practice The RetailWire Golden Rule when submitting your comments.
Braintrust
"Kohl’s has gone all-in on innovation and mobile and it’s been paying off."

"Kohl’s continues to provide a better quality product and what appears to be better pricing while others have not found the right combination."

These are truly impressive numbers and management gets full points, but like Macy’s and J.C. Penney, I think the results have more to do with overall market conditions than anything Kohl’s may be doing strategically. Time will tell, but I’m still skeptical that they can keep this up beyond the holiday season.

I think the reason why Kohl’s did well this holiday season was a combination of all the factors mentioned in the article. For starters, the increase in-store traffic. That is a significant beginning to increasing sales. Many retailers saw higher store traffic, but Kohl’s most likely did better than competitors because of the many programs it had in place. Customers are familiar with Kohl’s cash and love the concept. Kohl’s no doubt had the right mix of merchandise, prices and offers. Also, adding Amazon was another wise move. Lastly, Kohl’s mobile app and overall omnichannel experience paid off.

The equation for success in retail has never changed — that is, “Give customers the item(s) they want at the right price, and they will shop you.” Kohl’s has managed to do that, and they are apparently doing it very well.

Kohl’s has gone all-in on innovation and mobile and it’s been paying off. Other retailers like Best Buy and Home Depot have also hinged their bets on mobile and they’re seeing major dividends as well.

When shoppers think of digital and e-commerce they think Amazon and that complete shopping experience (searching/shipping/returns/convenience). When they shop other retailers they expect something similar and, unfortunately, many retailers fall short. But those that invest in the omnichannel experience are building a strong loyal customer base.

I expect Kohl’s to continue to post strong numbers and am excited to see where they land after the back-to-school shopping spree.

Kohl’s continues to provide a better quality product and what appears to be better pricing while others have not found the right combination. They have a great loyal base of shoppers with a great savings program with both coupons and Kohl’s money to spend. What’s not to like? On top of it all, they also provide very good customer service and that may be the real key to their outstanding performance this year!

Kohl’s success is as much a reflection of its branding and off-mall presence as it is a reflection of its business mix between digital and physical retailing wrapped in a mobile shopping environment. I also suspect that the company’s nascent relationship with Amazon positively amplified store traffic.

What’s usually missing from these analyses is the positive multiplier effect that drives higher customer conversion when you properly integrate the physical store with the digital and mobile ways that consumers go about shopping today.

Maybe the Amazon Lockers are working and maybe their new CEO is much better and maybe Amazon will buy them. Oh and also, maybe all boats are floating so they just caught a good wave. I think all of the above.

No doubt the favorable tail winds aided Kohl’s. However, it doubled the sales growth of its nearest rivals and did so in a way that portends continued growth. Unlike other retailers, Kohl’s understands that omnichannel is about customers, not channels. It is about your customers and how they interact and access your products and services. It includes robust and varied order fulfillment strategies and better mobile experiences. Kohl’s has done a terrific job in these areas of omnichannel and the results are testimony to a well-positioned strategy.

I think Kohl’s focus on becoming the best omnichannel department store is paying real dividends. Yes the apparel market macro spend came back but the scale of their improvement far outpaces their competitors.

Fully executing the omnichannel use cases and enabling customers to shop, buy and fulfill from anywhere. Replacing their POS with a fully omnichannel enabled POS. Creating a digital wallet where members can checkout in the store and apply digital coupons, Kohl’s Cash and Kohl’s Credit with a single scan. Optimizing fulfillment decisions with AI/ML using e-fullfillment centers, retail distribution centers and stores. None of this is new or earth shattering, Kohl’s has just done it at a level of effort and spend that no other department store or discounter has. That makes a difference.

Great points, all. But let’s not forget the retailer’s not-so-secret weapon: Kohl’s Cash.

Customers who made a purchase all holiday long are still being bounced back to redeem their Kohl’s Cash. It’s a smart move to engage and connect with customers.

Kohl’s appears to have a strong focus on innovation and experimentation versus some other retailers. They were an early mover in mobile and apps, store pickup, and have been very creative in developing new ways to merchandise in an omnichannel world. That sort of innovation is going to be critical for businesses to transform to a rapidly changing consumer environment.

Kohl’s is a great example of how retail companies can manage seasonality and use it to affect growth. Whether it’s a startup or a large global organization, every ecommerce company wants to know how to grow revenue during evergreen periods. Sounds like their technology is very advanced, but remember, that’s just a tactic. From a strategic standpoint, retailers all have the same goal in the post-holiday or post-season period: Give customers a reason to buy from you again and again. What we tell our retail clients who struggle with post-holiday blues is, don’t be afraid to introduce new products during baseline periods. Doing so can lift baseline performance and close the gap between exciting promo periods and evergreen months. For example, anytime you have newness on the site, you not only give your visitors a reason to buy, but you train them to come back more often. They can expect something different when they get there. Whereas if customers checked the site a lot, but saw it was the exact same every visit, they would… Read more »
0
|
0
-   Share

Braintrust
"Kohl’s has gone all-in on innovation and mobile and it’s been paying off."

"Kohl’s continues to provide a better quality product and what appears to be better pricing while others have not found the right combination."