Will smaller stores and omnichannel pay off for Kohl’s? 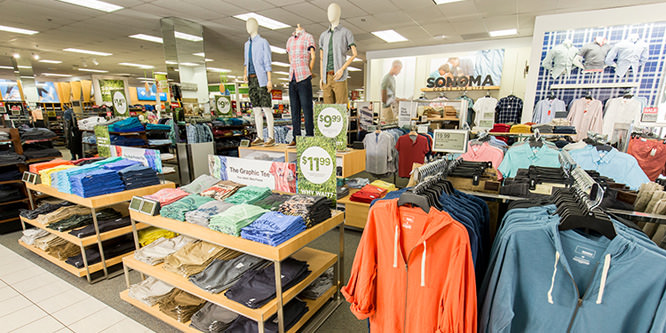 While many rivals are closing stores, Kohl’s is adding to its numbers. The rationale is straightforward, the chain’s CEO Kevin Mansell told attendees at this week’s Shoptalk conference in Las Vegas. Kohl’s future success is dependent on its ominchannel efforts and, not only does the retailer lose physical store sales when it shutters a unit, but its online business drops off, as well.

Mr. Mansell, who reported that 85 percent of Americans live within 15 miles of a Kohl’s, said the company’s online sales were flat in markets where it closed stores last year. As a company, online was up 12 percent.

“Success for us is becoming an amazing omnichannel customer,” said Mr. Mansell, who said tech investments are weighted to supporting stores.

Admitting that his company is “not as agile as we need to be,” Mr. Mansell pointed to new, smaller stores and Kohl’s mobile app as ways the retailer is making customers’ experiences “a lot more engaging.”

Kohl’s CEO, in a nod to the sales shift from physical locations to online, said “stores will continue to get smaller over time.” About 20 percent of the chain’s store count currently consists of smaller stores. Kohl’s, which operates stores up to 100,000 square feet, is opening new units nearer to 70,000 square feet.

“Mobile,” Mr. Mansell said, “is the driver of behavior when customers come into our stores.” Roughly 18 million people have adopted the Kohl’s app to date, he said.

While Kohl’s success is largely tied to its aggressive promotional strategy, Mr. Mansell acknowledged that it could be confusing for some customers. As a result, Kohl’s has invested in making its mobile app “simpler” to use. One example is its Wallet feature, which combines coupons, Kohl’s Cash and Yes2YouRewards in one place. This relieves customers from the need to question whether they’ve gotten the best price possible when shopping at Kohl’s.

Organizational changes at headquarters have made Kohl’s more responsive to the needs of its customers, said Mr. Mansell. The retailer has emphasized “recruiting and retaining a lot of talented people” while eliminating silos and focusing on collaboration internally and with vendors.

DISCUSSION QUESTIONS: Do you see smaller stores and a greater focus on omnichannel as a strategy that will prove successful for Kohl’s? How important will Kohl’s mobile app be to its future success or failure?

Please practice The RetailWire Golden Rule when submitting your comments.
Braintrust
"The strategy is completely on point and will enable the Midwestern-based retailer to cater to its price conscious audience."

"As to the smaller or downsized stores, the trick for Kohl’s will be to keep narrowing its assortments to fit these formats."

"I’m going to throw out a crazy idea. What if Kohl’s could collaborate with some key vendors and make a limited branded line of apparel basics..."

12 Comments on "Will smaller stores and omnichannel pay off for Kohl’s?"

The key to omnichannel success is the customer experience across the total ecosystem. More stores and smaller stores may work for Kohl’s IF the online experience and mobile app are good enough. Stores and online are better together if they create an end-to-end seamless experience.

Kohl’s is doing the right thing by focusing on omnichannel. It is interesting to see that “online sales were flat in markets where it closed stores” compared to their online growth of 12 percent, overall.

One interesting aspect is that omnichannel means customers often process click and collect orders. That means smaller stores in more geographic regions can service customers just as well as the bigger stores did in the past. I think this strategy will work. It’s a brilliant new angle on the benefits of omnichannel retail.

It’s wise for Kohl’s to tailor its online strategy to organizing promotions and coupons, since discounts are a primary motivator to shop at the store. Too often companies invest in an app or website only to under-promote the technology, or to make it irrelevant to their actual customer base.

Specialty stores are very en vogue, and with the location-based success of Dollar General I can see the motivation for a discount retailer like Kohl’s to lean towards ubiquity. The strategy is completely on point and will enable the Midwestern-based retailer to cater to its price conscious audience.

The word omnichannel simply means creating a seamless shopping experience regardless of the manner and method by which the shopper touches your brand. The key word here being — touch. The physical experiences a shopper has with your brand in a brick-and-mortar store are invaluable. These experiences are amplified even further when you add human emotion and interaction. By creating smaller physical stores that provide a seamless shopping experience and an environment that connects emotionally with all the senses your brand will be rewarded.

I’ll start with my usual “full disclosure” that I worked for Kohl’s (and with Kevin Mansell) from 1982 to 2006. Convenience has always been one of the legs of Kohl’s strategy and its real estate portfolio was intentionally built apart from regional malls. (I think Mr. Mansell mentioned on CNBC that only 80 of Kohl’s stores are located in regionals.) Maintaining this footprint is not only important as Macy’s and J.C. Penney continue their strategic retreat — not to mention whatever happens to Sears — but also as a way to leverage the e-commerce business that represents 15 percent of Kohl’s sales today.

As to the smaller or downsized stores, the trick for Kohl’s will be to keep narrowing its assortments to fit these formats. This is just as true in full-sized stores — when Kohl’s takes a position on a key brand like UnderArmour (or activewear in general), something has to give.

Omnichannel isn’t what we thought it would be — it’s a symbiotic relationship between online and physical stores. One without the other doesn’t create a successful retailer. Even the most obvious “exception” to this, Amazon, is opening physical stores in multiple formats. Kohl’s is right to create smaller stores and focus its energy on making its mobile app in-store experience a great one. The more they make the technology seamless and transparent for the customer the more second nature it will become for their shoppers. Like many retailers, Kohl’s has realized that not having stores often leads to reduced e-commerce sales — this reflects how shoppers treat their favorite brands. Out of sight out of mind is very true here! We know that a true “omnichannel” customer — one that shops across channels — has a higher value to the business. Encouraging customers to shop this way is a good strategy for Kohl’s as long as they remember that customers don’t shop in channels — they just shop. The technology has to make this easier… Read more »
2
|
0
-   Share

Speaking as someone who lives around a bunch of Kohl’s shoppers — the move will work well. They have complained the store near us has too much stuff and avoid online. The online gift certificate program needs help. Overall – the CEO is on the money — now just tune the apparel assortment down and ditch some of the kitchen stuff and you are cranking. Mobile? Priority number is the stores and their assortment. Mobile next. Kohl’s shoppers love to come home with stuff.

Reviewing store size, assortments and the overall shopping environment to better service changing customer shopping preferences is definitely a continuous practice that all retailers should make a commitment to. There is a reasonable store size that can meet the expectations of the Kohl’s desired shopper — and Kohl’s seems to be adjusting in a pragmatic manner.

It is worrisome that some retailers have chosen to completely go online — this seems like an over-adjustment. What about the consumer who actually wants to go shopping? This course of action of giving up on the store presence, as some retailers have recently done, is giving away an advantage.

I’m going to throw out a crazy idea. What if Kohl’s could collaborate with some key vendors and make a limited branded line of apparel basics for distribution in Dollar General/Family Dollar? Talk about access to customers with a need for basics, a bias toward promotions and high reliance on mobile!

Is omnichannel a viable retail solution or an enigma that continues to evade a universal definition and/or set of participating rules? I am voting for “C” or none of the above. It seems to resemble a never ending call to invest in more and more hardware, software, service and support. The scarier part of this epiphany is the awareness that information technology product development for this 21st century “artificial intelligence wonder-ware” is driven by the banks, big retailers, and manufactures. Add to that the interference of transportation companies, hardware companies, software companies and communication companies and you will see why retail’s giants are starting to go it alone. As for the small and medium companies, their future relies on the ability to navigate this slippery Olympic downhill with its hairpin turns. We should all admire Mr. Mansell’s awareness of the new rules for this century’s consumer engagement needs. I also like the way he describes cash flow as “agility.” Mr. Mansell seems to realize that the means to turn survival into corporate stability is growing… Read more »
1
|
0
-   Share

I think there’s a fair bit of evidence that smaller stores are more engaging; look at the size of AmazonGo future grocery stores. It’s also easier to optimize such environments to be geared around how the store of the future evolves.

The psycho-social aspect of the customer experience is also more personal and intimate. So human interactions might feel less disengaged and retail store associates might feel more empowered. This has real consequences on the level of customer service.

It’s a bit late in the game to confessions of not being omnichannel-worthy. Which is why I don’t have a whole degree of confidence in big-box retailers squeezed by off-price consumers. Target, Macy’s and even Kohl’s, to me, falls in this category.

Their app does appear better than most, if we are to trust the Google play ratings. The wallet feature does sound like it integrates loyalty incentives well.

Physical retailers that sell brands can not succeed by providing shopping access essentially equal to an online environment. Instead of chasing access equality and calling it a win, they must do one better. High levels of perceived value — the most critical attribute of successful retailing — will keep shoppers coming. TJX, Ross etc.

Braintrust
"The strategy is completely on point and will enable the Midwestern-based retailer to cater to its price conscious audience."

"As to the smaller or downsized stores, the trick for Kohl’s will be to keep narrowing its assortments to fit these formats."

"I’m going to throw out a crazy idea. What if Kohl’s could collaborate with some key vendors and make a limited branded line of apparel basics..."