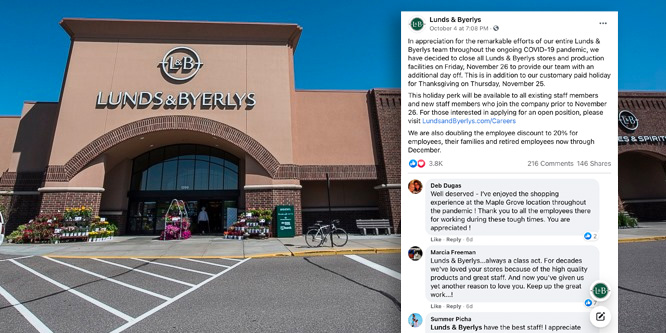 Lunds & Byerlys, a 28-store grocer in the Twin Cities metro area, is giving workers paid-days off on both Thanksgiving and Black Friday in recognition of their efforts during the pandemic.

The more than 200 responses to the Facebook post were overwhelmingly positive, including some from current and former workers. One customer said, “Amazing! Thank you for being human.”

Another said, “Thank you to all the employees that made the curbside grocery pickup possible during the riskiest months of this awful pandemic. Enjoy your extra paid day off.”

Last year, Big Y, which operates supermarkets in Massachusetts and Connecticut, closed on Easter and the Monday after as well as Thanksgiving and Black Friday to give workers a pandemic break, although the days were unpaid.

Days off for supermarket chains are rare and those days generally  are unpaid. Many are closed only on Christmas Day and offer limited hours on Thanksgiving, Christmas Eve, New Years Eve and New Years Day.

Aldi, Publix and Trader Joe’s are among the few grocers closed on Thanksgiving, again without pay for workers. Among major chains, Costco stands out for closing on seven unpaid holidays.

Last Thanksgiving, a number of general merchandise stores that are usually open were closed in appreciation of worker’s pandemic-related efforts as well as for social distancing reasons. Walmart, Target, Best Buy, Dick’s Sporting Goods and Kohl’s have announced they will remain closed on Thanksgiving for the second straight year.

Hazard pay, special bonuses and higher wages are among the measures grocers have taken to show appreciation to store associates during the pandemic.

Please practice The RetailWire Golden Rule when submitting your comments.
Braintrust
"Lunds & Byerlys should be celebrated. It’s important to to give frontline grocery workers a break and show appreciation. "

It always surprises me that grocery stores open on Thanksgiving Day. I get that some consumers are in the habit of buying food for their special meal on the day itself, but surely this could be done in the days before so that associates can have a day off with their families. In the UK, no big grocery store opens on Christmas Day so everyone gets their food shopping done by Christmas Eve. It’s really not that hard!

Thanksgiving AND Black Friday off? That’s a retail miracle! It’s wonderful and may work for this retailer, but we’ll never see big box retailers close on Black Friday. It’s too much of a time-honored shopping tradition.

Lunds & Byerlys should be celebrated. It’s important to to give frontline grocery workers a break and show appreciation. This strategy will barely hurt the bottom line and customers will plan around the closures.

This move will not only help retain workers but will also infuse loyalty in light of today’s labor challenge.

Offering a paid day off on Black Friday might be a big ask, but closing on Thanksgiving, paid or not, should be a given.

This is a brilliant move. Most everyone has their needs covered for their big feast, and by offering Black Friday off to their staff members that tugs at everyone’s heart. Hmm, a store with a heart — not bad publicity. Some customers will complain while they spend their days off relaxing at home. Not much sympathy from me on this one!

I’m a bit stunned by this actually. I live in the Twin Cities and Lunds & Byerlys is an institution here. They’re also a grocer, which makes them a fairly essential resource for things we need. While I genuinely applaud their support for their team, I’m not sure this is exactly how I would express those sentiments. Closing Thanksgiving, I’m 100 percent in favor of that. Closing the day after? Black Friday isn’t really a grocery event per se. Customers do want to get to their groceries the day after Thanksgiving — you’re always out of something. This is going to put off a lot of their customers I suspect. I would suggest choosing another day, or adding a floating holiday to their calendars so they can pick a day that works better for them. It will be interesting to watch how their competition reacts and how their customers react.

These folks have been on the front line now for over 20 months. They have been there throughout the pandemic helping customers deal with the necessities of life. They have suffered the consequences of COVID-19 deaths, sickness, and blowback from customers refusing to mask up. Paid holidays off respects the work of the these workers and recognizes the family holiday importance. Bravo to Lunds & Byerlys. This is definitely a success clue that should be followed by other retailers.

I suppose there are some shoppers who need to find groceries or ingredients on Thanksgiving Day — if they forgot something — so they will take their business elsewhere. But the small sacrifice of sales volume by Lunds & Byerlys will be more than offset by employee and customer goodwill.

The chain may benefit from a surge of business in the days before Thanksgiving this year, and it may also benefit from better associate retention during challenging times for retail hiring.

A very bold statement, closing on Black Friday. Even for a grocer, that is a big move. I suspect the PR and community goodwill will for sure help offset the sales lost on that day. I applaud them and hope that the marketing offsets are huge for them.

For a grocery store, closing on Thanksgiving is likely to have minimal impact on their sales that week. Customers have done the food shopping in preparation for the holiday. Closing the day after might have some impact but as long as Black Friday kicks off the Christmas sales rush again the impact is far smaller than it would be for a normal Friday.

That is not true for most general merchandise retailers. Black Friday remains a very large sales opportunity and customers expect these retailers not only to be open but to have items at a discount available for purchase.

Unfortunately shopping has become omnipresent in America. When I was growing up everything except the newspaper/candy/soda fountain stores and the bakeries were closed. In my town, all the stores were closed on Wednesday afternoon. Stores were open no later that 5 p.m. or 6 p.m. Of course all stores were closed on holidays. But as they say, “those were different times.” With regard to today’s question I’d rather say, Lunds & Byerlys’ move to treat Thanksgiving and the day after as paid holidays off. Wow! Give workers a holiday weekend! The extension of retail hours over the decades coincides with the attitude by the retailers and even the shoppers that the in-store staff was really a disposable property. Fortunately, Lunds & Byerlys are thinking otherwise. This is a great move. I suspect it is not made with profits in mind, but with the idea that the store staff is important to the success of the company. The day is a national holiday. Banks are closed. There is no mail delivery. Would it be nice if… Read more »
3
|
0
-   Share

That is amazing and they are getting the extra day paid as well! I think you need to be open part of the day on Thanksgiving, but grocery stores are generally empty on Black Fridays.

Braintrust
"Lunds & Byerlys should be celebrated. It’s important to to give frontline grocery workers a break and show appreciation. "