Nike steps up its game with a new tech innovation center 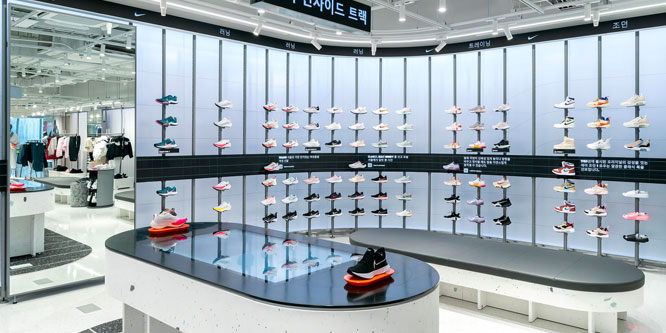 Nike is opening a new hub solely for technological innovation.

The athletic shoe brand will be opening its technology center in early 2023 in Atlanta, GA,  according to Engadget. The location will be dedicated to improving the brand’s logistics and supply chain and reimagining the consumer experience with artificial intelligence (AI) and machine learning. It will also focus on cybersecurity with a new “command center” for the East Coast. Until the new facility is ready, employees will work remotely.

Nike has been doing more on its own lately, which could be part of the reason it is dedicating such resources to pursuing logistics technology on the cutting edge.

The iconic brand has continued to end or alter its longstanding wholesale relationships with shoe retailers nationwide to focus on direct-to-consumer relationships. In March of 2021, the brand announced it would no longer be selling shoes through DSW, Urban Outfitters, Shoe Show, Dunham’s Sports, Olympia Sports and Big Five, and that it would be removing its branded apparel from Macy’s.

More recently, it began pulling many of its most popular SKUs from Foot Locker, which sent the retailer’s stock tumbling.

Even before doubling down on D2C, Nike was emerging as a tech-forward brand. Nike began utilizing augmented reality as part of its mobile app for reimagined shoe “drops” in 2017 and has also been integrating technology into an increasing number of its standalone stores.

The brand last month opened a 5,000 square-foot Nike Live concept store in Houston, TX, according to the Houston Chronicle. The store, like the other Nike Live locations placed in major U.S. cities since 2018, allows shoppers to interact with store staff and check on product availability through the brand’s apps.

Nike, at the end of last year, acquired virtual shoe store RTFKT Studios, according to The Verge. RTFKT purports to have made $3.1 million in six minutes through a promotion selling NFTs in conjunction with real sneakers.

The athletic wear giant has taken other steps into the metaverse as well, like a branded virtual world on the Roblox platform.

DISCUSSION QUESTIONS: Do you think a center geared toward supply chain, artificial intelligence and security tech is a worthwhile investment for Nike? Is this type of operation something that all major consumer brands need at this point in time?

Please practice The RetailWire Golden Rule when submitting your comments.
Braintrust
"It’s a competitive advantage, but maybe more importantly, it’s a pioneering effort that many brands and retailers will learn from."

Being a leader in innovative technology could be a big competitive advantage and differentiator for retailers. Nike has been and continues to be an early adopter of new technology and is constantly testing innovative concepts. In this environment, I think it is better to be a leader than a follower or laggard.

Nike doesn’t do anything haphazardly. This move is an important part of a holistic strategy to fully own the customer experience and relationship with consumers. This will help Nike further piece together all the parts of the customer journey and get closer to shoppers. Do all retailers need to do this? Not necessarily, but if they want the complete picture on consumers and have previously been spread too thin across retailers, this is a key initiative.

“…reimagining the consumer experience with artificial intelligence (AI) and machine learning.” In 2022, that is boilerplate marketing speak.

The details here are vague. Until specifics are provided around innovations that authentically impact consumers (or even shareholders) in some concrete way, this is just the same old talk.

This is way more than worthwhile. It’s a competitive advantage, but maybe more importantly, it’s a pioneering effort that many brands and retailers will learn from.

Investing in innovation is the critical key to unlocking new ways of retailing and Nike is and continues to lead the pack.

Nike’s strategy has been clear. Put the customer in middle and delight them with the right product in the right channel and at the right time. Investing in innovation and the supply chain will get them there and other brands can learn from Nike’s strategy.

They are the best in the world for a reason and they know it.

This move by Nike to cut wholesale ties has been going on for almost a decade. It was no secret to Nike that many of the sporting goods retailers it supplied were doing upwards of 50 percent of their sales in Nike gear, so why give up the profit when you can disintermediate the retailer and go direct?

Technology is Nike’s future and they have already made major investments, like their acquisition of Celect (a D2C product leveraging 21st century algorithms to determine optimum D2C routing). This center is just the evolution of the strategy.

Other retailers should take note, both for the tech stack Nike is building and for the lack of loyalty to retailers that giant brands can show. There seems to be a gaping hole for a new global megabrand to fill all those empty partner shelves. We shall see.

Not all major consumer brands are candidates for tech innovation build-outs, just as many brands can’t afford to show the hand to wholesale partnerships. “Not everyone is Nike” is the cautionary phrase. The good news is that major brands may not have to build if Nike decides to monetize its tech innovation platform outside its digital and flagship walls. I wouldn’t count out the possibility.

Never bet against Nike. Their pioneering work on brand management and customer experience have changed the game for DTC companies. Look for others to follow.

Defintiely a worthwhile investment. Innovation should always be front and center for this type of company.

There are just a handful of brands big enough to try this out. I’m sure Nike has done their homework, tested, and tested some more. It was a big decision to pull away from retailers to go direct-to-consumer. The technology center is going to help them run their company in this new direction. Exciting times ahead for Nike!

Nike is on a fast track to major success or spectacular failure with their strategy of direct-to-consumer only. Getting the distribution to all geographies is a really big task and cutting out the retail channel is an “all in one basket” strategy that only someone like Nike can consider. However, to now believe that they can stay ahead of the rest of the technology space by going it alone is another major step into high risk space, if not arrogance. They certainly have the resources to be able to put in the funding to research and develop leading edge technology but companies who have tried this in the past usually find they slip behind because they do not get the broad input from a wider base of customers. Thinking you know best can be taken one step too far and only time will tell if this is that step.

Absolutely worthwhile, especially with Nike resources. Basically it’s a lab. All the large brands and the largest retailers have learned to leverage parallel operational innovation with existing operations. For Nike, the new lab allows testing information, market conditions, propensity to buy and more. No reason to skimp on learning about AI, supply chain or any other tech.

This can be a strategic advantage, IF it actually translates into solutions that get moved into the business driving value. All too often innovation initiatives turn into labs for science projects that never materialize into scalable solutions that drive business value. In order to succeed, Nike will need to measure and manage a pipeline into the business, and ensure innovation leaders understand and deliver on those expectations.

Today, many brands are going D2C (for obvious reasons). This requires that they be tech-enabled. So, in my opinion, Nike’s expenditures in a technology hub are well worth the money. And all brands will require such expertise in order to become customer-centric and, ultimately, successful. However, we must acknowledge that not all brands have the resources to do so; they can seek other options, such as outsourcing. However, digital transformation is no longer optional!

Braintrust
"It’s a competitive advantage, but maybe more importantly, it’s a pioneering effort that many brands and retailers will learn from."