Nordstrom launches a podcast for its fans 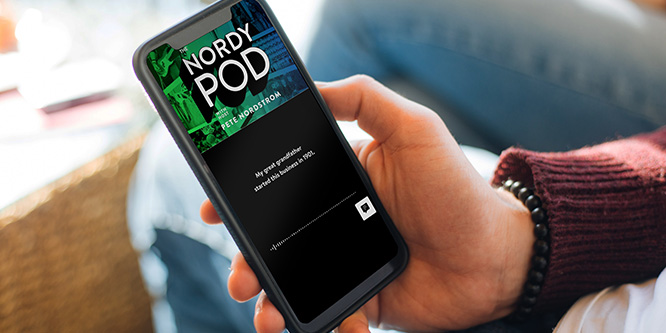 Nordstrom has introduced its first podcast, hosted by Pete Nordstrom, president and chief brand officer. The Nordy Pod is described as “a new way for Nordstrom-obsessed customers to peek behind the curtain.”

The first episode, running 68 minutes, features a lengthy interview at Nordstrom’s New York City store with legendary merchant Mickey Drexler covering his beginnings and career ups and downs as well as advice. The podcast also includes an interview with a veteran Nordstrom stylist and a customer whom Nordstrom helped after her daughter had a potty training accident in the store. The interviews are intimate and unscripted.

“I’m doing this without a net,” Mr. Nordstrom told Forbes. “While the marketing team has supported me, they’ve not been along the journey for any kind of editing process. The most interesting part is getting to talk to some really fascinating people either involved in our business or in some way have either inspired or motivated me.”

Podcasts have taken off in recent years. Their appeal is largely traced to convenience as they are easy to access and users can listen to audio episodes while running, cooking, cleaning and tackling other tasks. Listeners also have an endless variety of topics to explore, with Spotify now carrying 3.2 million podcasts, up from 450,000 in 2019.

Among other retailers, Walmart publishes an “Outside the Box” podcast featuring retail thought leaders and sponsors the “Who What Wear with Hillary Kerr” fashion podcast. Ebay has one centered on entrepreneurs, Blue Apron on home cooking and Sephora exploring self-image.

Trader Joe’s, however, appears to be the only other major retailer offering an inside-view podcast, although it doesn’t feature a top executive.

Nordstrom’s podcast comes as brands are increasingly facing pressure to take a stand on social issues, and consumers, particularly younger ones, are seeking to purchase from brands that align with their values.

Said Mr. Nordstrom in a press release, “I want to give people insight into the company and the things we stand for, and hopefully, they’ll learn more about the Nordstrom story along the way.”

DISCUSSION QUESTIONS: Do you expect more retailers to launch their own podcasts with insider POVs, such as Nordstrom’s? What do you see as the key to producing successful podcasts?

Please practice The RetailWire Golden Rule when submitting your comments.
Braintrust
"The key to being successful will be having hosts hide exciting Easter eggs throughout the episode so that loyal fans can experience perks from listening."

16 Comments on "Nordstrom launches a podcast for its fans"

I worry for Nordstrom because they pursue ideas like this rather than advertising. It appears to be a blind spot – many now are unaware of what Nordstrom has to offer. A podcast is not going to help much – especially as customers are so overwhelmed with content elsewhere. While I wish Nordstrom well, I just don’t see this as helpful for them.

It makes sense for retailers with cult followings to launch podcasts. The key to being successful will be having hosts hide exciting Easter eggs throughout the episode so that loyal fans can experience perks from listening. Examples of the type of content that would do well – hidden services the retailer may provide, exclusive codes for limited and early product launches, and interviews with influencers/collection collaborators that customers are looking forward to.

Finding ways to reach consumers in our overloaded media landscape is a constant challenge. While I am not sure this podcast will have massive reach, it’s a low-cost, low-risk way to try to connect with podcast-loving Millennial consumers. I would humbly suggest from past experience that Nordstrom strives for consistency and frequency – even if initial listener counts seem low – if they hope to build a following.

Why not? Podcasts are a storytelling vehicle after all and the Drexler interview illustrates how retailers could take a master class approach to some episodes. Hopefully, retailer podcasts won’t devolve into yet another pay-to-play scheme with brands.

I like the Nordstrom approach which makes the brand more personable and human. For me, the key to a good retail podcast is storytelling – I want to be entertained and educated. That means anything too corporate, too stuffy or too promotional will be turned off pretty quickly!

Consumers are not very interested in what these podcasts have to say. There have been a few TV spots in which CEOs appeared in commercial advertising (Frank Borman for Eastern Airlines :”…we have to earn our wings, every day.”)

Retailers should and will launch their own content, including podcasts. Customers are looking to learn more about where they buy their product in addition to what practices align with their own values around sustainability and shopping local. Gaining insight into a retailer through podcasts, TikTok, and social platforms will only help brands get closer to their customers.

“Podcasts have taken off in the last few years.” Yes, BUT – only a very small subset of podcasts launched have been successful at attracting listeners and sticking around. Good podcasts have interesting content and keep to a reliable, and predictable schedule. No small feat. Doing this “without a net” as Mr. Nordstrom claims, puts it in danger of quickly become more of a personal journal then a channel for driving loyalty and engaging customers.

I like the idea of giving “Nordstrom-obsessed customers to peek behind the curtain.” There is so much potential for a lot of fun and interesting topics, but I’m not sure how many Nordstrom shoppers will care about topics like Mickey Drexler’s career ups and downs. The challenge will be to keep it focused on topics that resonate with Nordstrom customers.

One word — authentic. If retailers are going to produce podcasts they must deliver utility, and must be insightful, real and unvarnished. The founder of Spanx, Sarah Blakely, was a pro at this. She aired 30 second to 2 minute insta-videos on several platforms and consumers loved them. Nothing was edited, nothing was scripted. It was all about her busy, crazy work-life balance, talking about any and all topics, ranging from products to her kids’ activities. Retailers would be wise to follow this kind of authentic strategy or they’ll risk consumers thinking this is another version of corporate double speak.

Podcasts are ideal for an already loyal customer base. They will not attract new customers so, with that in mind, Nordstrom should look at podcasts to strengthen their customer bonds but not to add further growth to the franchise.

Sixty-eight minutes? Make it 15 and I may listen to it.

Will more retailers launch their own podcasts? Probably. Will they have significant impact? Well, that depends on the content but probably not. Consumers don’t need to see how the sausage is made, they would rather hear the sizzle as it hits the pan.

Done well it’s a great way to deliver value and to connect with customers. Content is currency for retailers and brands, and relevant, interesting information can increase connections and ultimately loyalty and sales.

If one retailer could pull this off, it would be Nordstrom. Their consumers and fans genuinely like this brand. And, the Nordstrom brothers can be somewhat of a charming ambition for those close to the brand. So, Nordstrom is coming to the table with good equity and a running start.

While I’d like to believe this could work for almost any retailer, truth is; I believe it would have an excellent chance of backfiring for Walmart. Not because Doug McMillion could not provide an equally inviting peek under the Walmart tent; but because some people simply love to hate Walmart. In that light, these types of podcast will likely do best where the retailer will be well received and respected by both listeners and fans.

Braintrust
"The key to being successful will be having hosts hide exciting Easter eggs throughout the episode so that loyal fans can experience perks from listening."