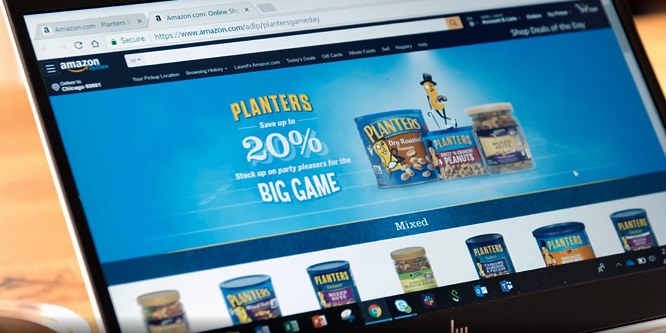 A GroupM study estimates advertising accounts for five percent of Amazon.com’s revenues from commerce-related activity and rated that as a “reasonable target” for other retailers working to catch up.

The giant media buyer, part of WPP, estimates retail media makes up between zero to three percent of revenues for other retailers.

GroupM said the “promise of retailer first-party data, albeit residing in yet another walled garden, is tantalizing — enabling purchase-based targeting and closed loop measurement.”

Going forward, retail media spend is expected to be fueled by still healthy double-digit e-commerce growth, shifts from traditional advertising spend, as well as “the expansion of use cases and growth of non-endemic brands.”

The expansion of “use cases” refers to retailers increasingly leveraging their data — i.e., website browsing behavior, e-commerce and in-store transactions — for off-site opportunities, such as third-party websites or for email or social campaigns. Walmart just announced plans to sell ads on TikTok and Roku.

Retail media in the early days focused on on-site opportunities, such as display ads.

“Non-endemic brands” refer to brands that do not sell any products through the retailer but seek to advertise to reach the retailer’s demographic. Retailers are expected to face competition for retail media advertising inventory from delivery and ride-share platforms, as well sites such as Marriott, which recently launched the hospitality industry’s first media network aimed at travelers.

GroupM wrote, “Scalability, differentiation and staying power, particularly in the context of the broader economic situation, will be the battle ground for many of the newer networks and their supporting technologies.”

DISCUSSION QUESTIONS: Is it realistic for retailers to set a goal of getting about five percent of sales from advertising? Is retail media a sizable opportunity for many or just a few retailers?

Please practice The RetailWire Golden Rule when submitting your comments.
Braintrust
"There’s a lot to still figure out for new entrants."

"I think of this as convergence of in-store co-op and digital."

"Retailers will have one key issue with retail media networks (RMNs) – ad inventory."

We’re entering the eye of a perfect storm where the push for consumer privacy meets the shopper’s expectation of personalization. Retailers are beginning to realize that ads can give them access to more zero- and first-party data, and create a recurring revenue stream. That’s a big win for everyone.

So glad you mentioned zero-party data, which gets little mention but is gold to marketers. I believe Forrester coined the term for data voluntarily shared by customers as a further differentiation from first-party data.

As consumer spending slows, ad sales keep booming due to their potential for huge margins to offset shortfalls. Five percent of sales may seem like an ambitious target, yet established players have a shot at significantly growing their ad businesses.

While U.S. retail giants are known for their ads, more global retailers are jumping on this lucrative trend. Recent investments by retailers like Tesco, Mercado Libre and Falabella prove advertising’s growing international appeal.

It has taken Amazon how many years and how much spending to hit that 5 percent level? The number of eyeballs surfing on Amazon at any given moment is staggering, dwarfing the count of the nearest competitor. And other retailers aspire to the same level of advertising revenue? Doesn’t seem even remotely plausible.

Amazon is the trailblazer that others can follow and avoid early mistakes. The climb is steep, but the terrain has been mapped out for them.

Set any goal you’d like – there’s a reason Amazon gets that much ad revenue. When your numbers fall short, there’s your excuse – we’re not Amazon.

Amazon was an early adopter here, so I don’t know that other retailers need to have a goal as high as the mark Amazon is currently hitting. Benchmarking against Amazon would be smart once retailers find their footing here and feel confident in their strategy. There’s a lot to still figure out for new entrants.

I think of this as convergence of in-store co-op and digital. Where a CPG may pay for shelf placement in the store, they now achieve the online equivalent through paying for placement and targeted advertising on retailer e-commerce sites. The intent of the consumer is very high and very focused, so the payoff is much better than the Wild West of the wider internet. But at the end of the day, the success of this “new media” will depend largely on the regular traffic that a retailer can sustain, and whether they can prove that converts for an advertiser.

“…convergence of in-store co-op and digital.” Grocers would likely shudder to hear you say that, as their core retail media objective is to attract new digital advertising spend without giving up a single dime of the trade funds and allowances that have accounted for most of their store profits for decades.

The concept is scary, and retailers will not risk trade funds going to ad placement. However, CPGs have been finding new dollars to spend on RMNs based on their need for closed loop attribution as well as the quality of first-party data. For conversion, will your CPG power tools ad work better based on customer checking tool prices online or better based on a Facebook social media entry of a friend accidentally driving his power drill into the floor? The retailer data quality is leaps ahead.

I’m all for going big or going home, but setting a target of 5 percent for a retailer might be a stretch. How about starting at half a point or maybe 1 percent, and then working your way to 2 percent over several years? Recognition that most retailers are not the same as Amazon is OK.

Retailers will have one key issue with retail media networks (RMNs) – ad inventory. There are only a few major players in terms of traffic and footfall that can command an on-site based offering. Retailers will look to off-site advertising to complement their first-party targeting. However it completely makes sense for retailers to pursue RMNs – even if the returns are 1 percent. CPGs and brands are clamoring for great data and what better place than the point of purchase. Other issues include interfacing with programmatic buying.

(Plug alert:) Read my current and upcoming reports on RMNs for more depth.

Given the amount of ad spend that is harder to measure (people still do newspaper?), relevant, ideally personalized ads should have a more direct impact, and can be reasonably measured. Perhaps a starting point is what percentage of ad spend is going to digital, and to look to increasing that year over year. Marketing spend as a percentage of sales for online probably needs to be higher than the traditional brick and mortar marketing spend, and the percent of that spend that goes to digital should also skew much higher.

Retailers need to start making plans now to invest in CDPs (Customer Data Platforms). With the ongoing concerns of privacy and restrictions over the use of third-party cookies, it’s a lucrative opportunity for them to explore retail media. I believe, for retailers, retail media is like a “self-priming device.” Using advertising as a revenue stream will also enable them to manage their web traffic and bring in new customers.

“Data monetisation” has been banded around for around 10 years and many did not know how this would actually manifest itself. Retailers are finding themselves in a position of understanding consumers very well. A few years ago, grocer understanding of households was restricted to loyalty card holders but as more shoppers ordered online, this understanding is now much wider. Grocers know where people live, how many members are in the household and from purchase patterns have a pretty good idea about things like family celebrations, whether they shop elsewhere as well and even religion! Retail Media Networks are a key way that retailers can capitalise on this profile information helping companies to target to specific consumer groups – these may be for products sold by that grocer or other complementary areas. There are multiple examples of where core business does not provide the biggest part of the profit — Ford for example make significant amounts of money from Ford Credit rather than selling cars. Grocers have a similar opportunity — sell groceries, understand customers and… Read more »
0
|
0
-   Share

Braintrust
"There’s a lot to still figure out for new entrants."

"I think of this as convergence of in-store co-op and digital."

"Retailers will have one key issue with retail media networks (RMNs) – ad inventory."