Samsung brings its own ‘Experience’ to first U.S. stores 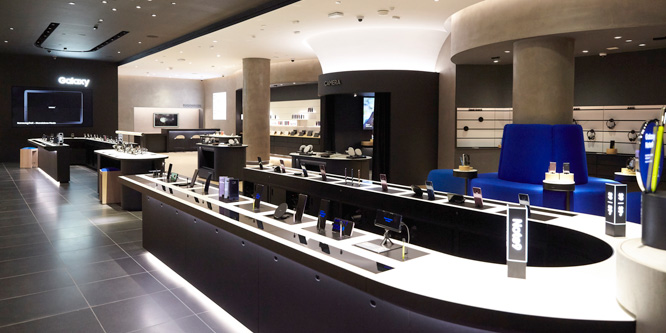 Coming 17 years after Apple Stores arrived on the scene, Samsung plans to open its first locations in the U.S. to sell its own products.

In the U.S., the South Korean tech giant has partnered to open Samsung Experience counters inside Best Buy stores and has also launched pop-ups to showcase virtual reality (VR) technology and product launches. An 837 flagship opened in New York’s Meatpacking District in 2016 was used to showcase — not sell — product.

In a statement, the technology giant said the openings of its first three Samsung Experience stores will celebrate the tenth anniversary of the launch of the Galaxy phone and comes after “Galaxy fans, in particular, mentioned that they were looking for a space to call their own, a place where they can get a feel for Samsung products first-hand.”

The stores — at The Americana at Brand in Los Angeles, Roosevelt Field in Long Island and Houston’s The Galleria — open today, the same day Samsung will hold its Unpacked event in San Francisco. At the event, Samsung will unveil its Galaxy S10, but more importantly the long-awaited foldable smartphone.

Much like Microsoft did when opening stores, the Samsung Experience will offer a similar experience to Apple’s locations albeit with a wider range. Visitors will be able to learn about and purchase the latest smartphones, tablets, wearables, TVs and numerous IoT devices. Customers will be invited to try hands-on demos and walk-in repairs for smartphones.

Borrowing from its showcase experiments, however, the stores will also feature a number of experiential elements, including the brand’s 4D VR theaters, a 4K gaming lounge, 8K TV displays and lessons on how to create an AR emoji.

“We want to build a ‘playground’ for Samsung fans — a place to learn about and try out all of the amazing new products we have to offer,” said YH Eom, president and CEO, Samsung Electronics America, in a statement.

Samsung is planning to kick off a “pop-up tour” in other malls in March.

DISCUSSION QUESTIONS: Is now the right time for Samsung to open its first stores in the U.S.? Will Samsung’s experiential approach help differentiate the stores and products from competitors with physical retail?

Please practice The RetailWire Golden Rule when submitting your comments.
Braintrust
"Samsung is smart to open true flagship locations rather than relying solely on branded shops within Best Buy. "

"Once consumers experience their technology, they may realize that this market is not a commodity market."

19 Comments on "Samsung brings its own ‘Experience’ to first U.S. stores"

Samsung has been experimenting with retail locations for years now – just, without the retail part. The Samsung 837 location in New York offered a lot of the play and experiential elements that appear to be going in to Samsung stores. The only difference is that the 837 location didn’t sell anything. All you could do as a consumer was “play.”

So, my answer is: Samsung is maybe a little late to the game. But they’re not starting from scratch.

More and more brands are going with the DTC model – It makes sense that Samsung would follow suit. They have an opportunity to differentiate with their TVs and AR/VR products, and they can create an end-to-end experience that is more immersive and unique that what Apple can do. The trick, as always, is converting those experiences into sales. I can’t imagine Best Buy is too psyched to see this as they are a huge seller of Samsung product.

Monkey see monkey do. Sure these stores will have some success just like Microsoft’s, but they will never rival Apple. I find the 10th anniversary of the launch of the Galaxy phone schtick as nothing more than marketing spin to justify why they are trailing their arch rival so late in the game.

Samsung will see some success from having pop-up stores, but I don’t see this as a game changer. What Apple has accomplished is not easy to duplicate although others have tried. Samsung has a strong name and products worth promoting, but they do not have the presence that Apple has. Pop-ups are smart because they’re small and usually have short term leases without much cost involved to operate them and if unsuccessful, the retailer can easily close them. If marketed correctly and if Samsung can create enough awareness, they may find this venture successful enough to continue it and expand it. Only time will tell how successful it will be and if Samsung can become a more significant player in the brick-and-mortar world.

This is long overdue. It’s about time that Samsung took on Apple head-to-head. The Samsung shops in Best Buy are good. This is an opportunity to be great. And I suspect that’s what Samsung will prove to be.

There is no time like the present if the company has a product line (Samsung does) and money to throw at some R&D (Samsung does). Samsung will probably open as many as 10 stores in the U.S. in the next two years or sooner.

Samsung has had a long history of staffed experiential centers within Best Buy stores, offering shoppers all sorts of hands-on opportunity and fellowship. I’m sure the three new stand alone stores will be awesome, but I question how they can maintain a “reason to keep going” beyond product launches and another place for group gaming. The “playground” idea seems a little forced.

Samsung is smart to open true flagship locations rather than relying solely on branded shops within Best Buy. “Showcase, not sell” is a key phrase. Even if the stores aren’t profitable, they will introduce consumers to the latest and greatest in Samsung’s world and increase the chances of driving full solution sales. By focusing its limited presence in major cities, Samsung has a greater chance of shoppers spreading the word.

As the playbook has evolved for digital native brands to open experiential showrooms, CPG and DTC firms are riding this wave to open their own retail showrooms. Samsung is a bit late to the game, as the technology space has been dominated by the ubiquitous Apple stores, and now the Microsoft stores.

Apple has perfected and evolved their retail footprint model over the years. In many ways, Microsoft took the Apple strategies and drove their own unique in-store experiences. It’s absolutely critical for Samsung to differentiate their stores from Apple.

For a company that has depended on retailers to distribute their products, now is the opportunity for Samsung to amuse, entertain and amaze their customers, with a highly experiential storefront.

I had the opportunity to visit one of the Samsung stores in Shanghai last year. I thought it was an excellent way to connect the brand to the technology they have today and what they are working on for the future.

The phones and tablets were not the drivers for me. But the big screen technologies for video and home theater were amazing.

I think it is the right time for Samsung to promote their technology and to show the quality of their products in the TV/video and home theater niche. Samsung is doing things that many of their competitors are not. Once consumers experience their technology, they may realize that this market is not a commodity market. Things that used to be out of reach, such as the building of home theaters, may not be for the average person. I think it is a great move.

The real opportunity here is the IoT focus. There will be millions of households that want LED lighting and connected appliances, but will need assistance in choosing and deploying them. Smart move.

I can understand why Samsung felt compelled to open its own stores. It would be interesting to learn what Samsung’s broader strategy is behind these initial locations. I would hope that each one of these stores has their Nexshop technologies embedded throughout and that they use these stores as real-world shopping, merchandising, and marketing labs- constantly experimenting, measuring, and optimizing every aspect of the brick-and-mortar retailing and shopping experience. All the resulting insights would lead to select and scaled retailing solutions that should be used in their broader retailing go-to-market strategies — shops-within-a-shop, pop-ups, DTC, etc. If not, they’ve wasted an invaluable opportunity.

I have been to the Samsung Experience twice. Once with a delegation from Austria and once with my grandson.

The Samsung Experience is much more of an “experience” than Apple. While I am sure you can buy there, there was not effort to sell. Just experience after experience. From VR to games to art and more — each showing off Samsung products.

My sense is that Samsung doesn’t care if you buy buy anything in the store. They would be happy if you buy at Best Buy or Amazon or anywhere.

The technology is outstanding. Why not show it off?

Wait, what do we call the Samsung 837 in New York? Isn’t that an “experience” store? They’ve been on the bricks radar for at least three years in the U.S. and have several stores all over the globe, especially in Korea. Given that, they should know a thing or two about physical retail. I would expect they’d do really well right out of the gate.

Experiential standalone stores are generally a losing proposition, especially when compared to Samsung’s current retail presence and store within a store at Best Buy locations. Increasing their current retail presence seems smarter, extends their reach and exposure, and makes their partners truly partners, instead of competitors. Samsung has to consider all of this, but most importantly that they are not Apple, and this is not 2002.

Retail space is plentiful — even in top markets there are empty storefronts — and of course Samsung has plenty of moola to experiment, so yeah, it’s the right time.

That having been said, however, I’d be cautious about comparisons to Apple. The latter is a cult, and few if any retailers can hope to replicate the “ado” that accompanied the Apple Stores (indeed, even Apple itself would be hard pressed to duplicate it).

I just got back from Dubai where Samsung and Huawei were marketing heavily. With their market power and product innovation, seems like investing in stores in the US is a smart move.

I consider this positioning, advertising and marketing. It’s about positioning and being more visible to their current and potential customers. The experience, if kept fresh, will bring people back. Putting a store within a store is easy. Creating a destination is challenging and expensive. I’m sure that Samsung will look at metrics that include general exposure, conversion (new customers) and more.

Great Article Tom. Physical retail for Samsung is a smart move. Depending on how they manage their data and tribe of loyal “Samsunginyans” it could be incredibly valuable from a market insight standpoint. 😉

Retailing as we all know is definitely not easy. To date, manufacturers don’t always get it right on the first go — retailing and branding playgrounds are different messaging entirely. So, they’ll need to make sure they have the right balance.

However, I can see a whole new level of events and experience going way beyond Apple. But, they would need to play their own unique game not mimic anyone else’s.

Braintrust
"Samsung is smart to open true flagship locations rather than relying solely on branded shops within Best Buy. "

"Once consumers experience their technology, they may realize that this market is not a commodity market."