Shoptalk 2022: Retail media is the message from Instacart 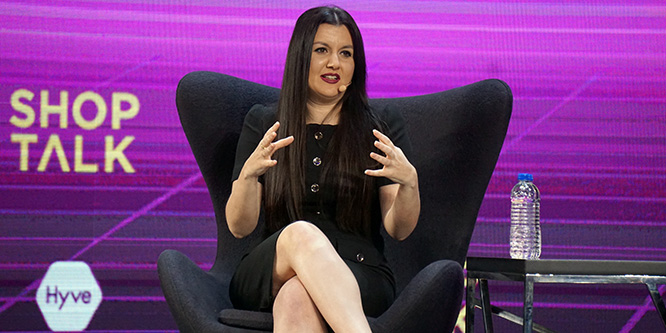 Presenters at this week’s Shoptalk in Las Vegas addressed several themes of great concern to retailers — inflation, sustainability, digital innovation and the weird rise of the metaverse among them.

None captured greater attention than the discussions about retail media, a concept which has captured the imagination and avarice of the industry as retailers sense an opportunity to monetize shopper data and siphon ad spend from traditional media budgets.

Lauren Weiner of BCG Global shared a preview of a new report from her firm that presents a bullish outlook for retail media growth. It projects revenues of $110 billion by 2026, representing 20 percent of digital spend. She importantly emphasized that profit margins for this activity are likely to far exceed those from merchandise sales, amounting to $75 billion in 2026.

Interest in retail media has been elevated by the expectations that cookies will no longer be an acceptable way to keep contact with digital consumers and awareness of the spectacular revenue streams being generated by the search-triggered ads on Amazon.com and Walmart.com. More major retailers are making moves to cash in. Kroger Precision Marketing has been one of the higher profile recent actors, motivated no doubt by fresh understanding of the scale of its omnichannel shopper interactions. 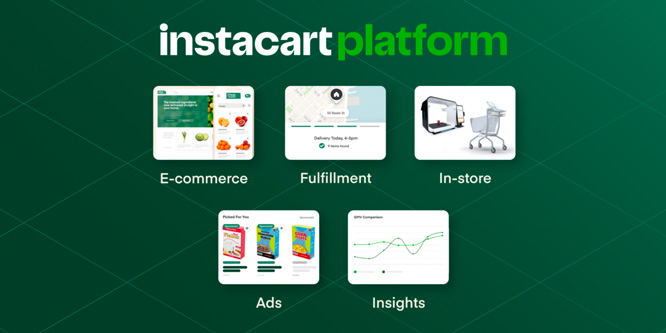 The significance was further underscored here by Instacart CEO Fidji Simo who took the main stage to discuss why her company delayed a planned IPO last fall and refocused its business model with a keen emphasis on retail media as its largest expected revenue stream.

Meanwhile, last week Instacart revealed its plans to go full-bore after the retail media opportunity, she said. The intent is to “put an added revenue stream into the hands of grocers” by implementing a “powered by Instacart” platform that brand advertisers can use to spread their messages across multiple retailers.

The Instacart Platform, rather than third party order and fulfillment services, now emerges as a primary solution offering for omnichannel retailers.

“Over the last 10 years we have been developing technology that we can now put into the hands of grocers,” Ms. Simo said.

Of course, the intent also is to keep a large slice of the retail media ad revenue this generates. As an aggregator and media sales platform, Instacart anticipates that targeted ad messages and personalized offers from brands can be delivered right inside the shopping cart.

Ms. Simo said the company expects its Instacart Platform business will perform at break-even, but that the high-margin retail media business will deliver exceptional profits that will drive the company forward into its next era.

DISCUSSION QUESTIONS: Is Instacart on the right track with its two-pronged pivot to become an ecommerce platform for grocers combined with an aggregator of retail media revenues? Should retailers be wary of a business model that splits the take?

Please practice The RetailWire Golden Rule when submitting your comments.
Braintrust
"The key question, which Instacart has so far not answered, is whether they can expand the pie for retailers rather than just snack off of their plate."

"Instacart’s strategy is ambitious and timely as e-grocery catapults forward."

"Retail media has always been a fragmented space. Instacart has the opportunity to combine efforts for smaller players and make it more effective."

11 Comments on "Shoptalk 2022: Retail media is the message from Instacart"

Retailers have an enormous amount of data on their shoppers. Brands want access to those shoppers, often in a targeted way. Put the two things together and you have supply and demand which presents an opportunity for retail to monetize their data assets. However there are caveats. For this to work, the core – which is the retail offer – needs to work; media isn’t a replacement for the hard effort needed in that space. Retailers also need to be sensitive about how they advertise and market to customers: spamming them won’t pay dividends in the long run. There is also an issue of more retailers crowding into this space, which devalues it. And finally, all companies need to be alert to any potential change in data regulations which may affect their ability to target shoppers.

Instacart offers a solution for retailers and, until they offer their own versions, they are going to feed the beast. Amazon has long known about the power of retail media and sees Google as key competition for site searches. It’s about time that other retailers are waking up to this potential. They are now playing a game of “if we build it, will they come,” meaning advertisers. Instacart is a way to test it, but they need to be cautious of making sure once they are ready to develop their own, that they can then get the customer off Instacart and over to their platform. Walmart is building its own, while Target acquired Shipt. Others need their own direct strategy but should play nice for the time being.

Instacart is on to something that they can make big, but unless they do it better than everyone else, the retail media ad market will become competitive quickly. What are the barriers to entry in to this space?

Instacart is definitely on the right track in terms of its mission to aggregate retail media opportunities across multiple retailers. Until now, this has been the missing link, one that brands have attempted to solve through the establishment of internal centers of excellence. Retailer push-back is the main obstacle as Instacart’s tentacles continue to reach into retailers’ pockets and data lakes.

As we move closer to Web3 and standardized opt-out data protections, retailers will be looking for new ways to be seen by shoppers. As shopper behaviors change to make platforms like Instacart more common, becoming a go-to media provider now will help them diversify revenue and have a valuable service to offer their customers.

The Instacart value proposition is interesting. They’ve become a grocery e-commerce hub, which will definitely be attractive to CPG brands given the opportunity to advertise at the point of purchase inspiration.

The revenue share with grocers is an interesting model to drive adoption. It’s a smart move. And most grocery retailers, especially regional chains, don’t have the margins to invest in the tech to pull this off themselves. So it’s a win-win.

But creating an ad platform that meets the needs of sophisticated media buyers like CPG brands won’t be easy. It will be interesting to see if they decide to build, buy or partner to accelerate this rollout.

Many stores and shoppers already see Instacart and other delivery services as expensive partners in the retail ecosystem. The key question, which Instacart has so far not answered, is whether they can expand the pie for retailers rather than just snack off of their plate.

Instacart’s strategy is ambitious and timely as e-grocery catapults forward.

Given Instacart’s range of grocery partners, it has a data advantage in this high-frequency category.

Retail media has always been a fragmented space. Instacart has the opportunity to combine efforts for smaller players and make it more effective. The question is whether that really helps retailers over the long term.

The Retail Marketing surge appears driven by a frenzy to “monetize” shopper data, but there are strategic goals at stake too.

There is great merit in the notion of moving the promotional message adjacent to the point of decision. (Anybody remember Actmedia’s Instant Coupon Machine?) Current efforts in the digital realm include search-triggered ads and embedding relevant cross-sell and up-sell offers within online shopping carts.

Retail media methods are most valuable when message delivery can be targeted and confirmed, and resultant purchase behaviors (“conversions” or “activations”) can be measured and analyzed.

When brands and retailers apply these methods in concert and transparently share the data, promotional efficiency and precision can be greatly increased. This has potential to create a “flywheel” effect for both partners while enhancing shoppers’ value perception and loyalty.

My bit of wisdom for retailers is “Take the retail media cash, but don’t let a money grab cause you to lose sight of your shopper relationships.”

I think that Instacart is on the right track with its e-commerce aggregator of retail media avenues. Unlike older times, when the success of marketplaces depended on the location, the modern-day digital marketplace relies heavily on customer data. Without knowing customer behavior and preferences, Instacart won’t be able to offer quality recommendations and personalized promotions. Speaking of splitting revenues between retailers and Instacart, I think retailers here would need to play a bit smarter. By collaborating with Instacart, retailers can get a ready-to-go platform and enjoy the benefits of a reduced time to market. But because Instacart is a retailer themselves, the risk of Instacart leveraging their customers’ data for their own needs always prevails. Instacart might also trigger undue competition and try manipulating customer preferences accordingly. To avoid this, retailers can consider trying Instacart initially for a short period. Once they gain their market share and stability, they can build their own capabilities and move out of the collaboration. Even if not going solo, retailers will at least gain better control which in turn… Read more »
1
|
0
-   Share

Braintrust
"The key question, which Instacart has so far not answered, is whether they can expand the pie for retailers rather than just snack off of their plate."

"Instacart’s strategy is ambitious and timely as e-grocery catapults forward."

"Retail media has always been a fragmented space. Instacart has the opportunity to combine efforts for smaller players and make it more effective."