Should Amazon pay a penalty for counterfeits sold in its marketplace? 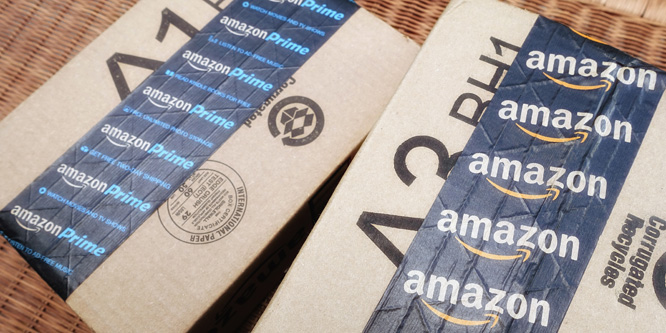 A bill called the Shop Safe Act of 2020 currently being considered by Congress aims to curb the perennial problem of counterfeit goods being sold through e-commerce marketplaces.

The bill, which has been introduced to the House of Representatives by a bipartisan group of legislators, would shift liability for phony sales onto the owners of the marketplace websites, according to Engadget. Were the bill to become law, online marketplace platforms would be required to vet sellers for legitimacy, remove counterfeit listings and take more proactive steps to prevent the appearance of counterfeit products on-site.

Selling counterfeit goods via e-commerce marketplace channels has become a big business in numerous verticals. A report from the New York Times late last year alleged that Amazon.com not only facilitates the sale of bootleg books through its marketplace but also through its CreateSpace self-publishing platform.

Up in the higher price range, counterfeiters, often based outside the U.S., have taken to knocking off designer apparel and footwear to sell online, just as they long have done offline. The products attract frugal shoppers who either knowingly or unknowingly end up buying knockoffs positioned as the real thing on Amazon.

The House bill is not the first recent gesture politicians have made to crackdown on the sale of counterfeit goods in the U.S. via e-commerce marketplaces.

In January, the Trump administration announced that the Department of Homeland Security (DHS) would begin levying fines and other penalties against third-party marketplaces dealing in counterfeit goods.

With more than three million sellers having joined Amazon’s third-party marketplace just since 2017, according to a Feedback Express infographic, it would seem that the e-commerce titan would be the business most significantly inconvenienced by demands for scrupulous vetting of sellers.

Amazon, in a statement given to CNBC, claimed that it prohibits counterfeits and has been actively fighting to stop bad actors.

Other big retailers like Walmart and, more recently, Target, have launched their own third-party marketplaces and may want to move cautiously as they build out their operations in light of the House Bill or any other forthcoming restrictions.

DISCUSSION QUESTIONS: How would Amazon and others have to retool their operations if the Shop Safe Act of 2020 becomes law? Would it change the way online marketplaces operate entirely?

Please practice The RetailWire Golden Rule when submitting your comments.
Braintrust
"It is time the online traders have the same responsibility as traditional retailers. "

"Amazon needs to do a better job at monitoring for counterfeits, but it also needs to ensure that legitimate sellers are not caught in the net."

"Establishing trademark and contributory liability are the key differences here. This would require significant retooling of methods to detect counterfeits."

10 Comments on "Should Amazon pay a penalty for counterfeits sold in its marketplace?"

This is exactly the same issue that regulators are wrestling with on the media side: Are tech platforms responsible for what happens on their platforms? Media companies have protection from Section 230 of the 1996 Communications Decency Act – at least for now, but we have generally presumed that this concept extends to commerce as well. Clearly, on both fronts, the government needs to play a more active role regulating these media and commerce platforms. Is Congress equipped to do this properly, though, with a membership that can be charitably characterized as tech non-savvy? Will the fix (and its unintended consequences) be more damaging than the problem? I’m not optimistic.

The only difference between a retailer selling a product in its store or on its own site and selling it on a “marketplace” is that they do not have to hold stock of it. So why should retailers have to carry the cost of ensuring that the stock they sell is not counterfeit while marketplace sites don’t? We seem to want to create a whole new world and set of rules for the online community and this just encourages unscrupulous traders to profit and thus proliferate. It is time the online traders have the same responsibility as traditional retailers.

If there is a not a stand made here then the chances of stamping out counterfeit goods will be greatly reduced. Amazon and others would carry on as today and not worry if their “partners” on their marketplaces are legitimate businesses or not. Everyone needs to take responsibility for their supply chain and the integrity of their brand.

There is no question in my mind what should be done. If a retailer puts a counterfeit product on their site or in their store, they are liable. They either did it knowing it was counterfeit or did not do the necessary due diligence about the supplier.

The consequence should be a total refund to the consumer who bought the product. Force that and watch the retailer vet their suppliers better.

But there is one problem. Oftentimes the consumer wants the counterfeit. They know it is counterfeit. There is no question that the luxury brand being sold by the street corner vendor is not real, but gee, it only cost 10 percent of the price of the real thing.

It is all a matter of transparency. Present it as the real thing and if it is not, you are liable.

If the Shop Safe Act becomes law, Amazon and others would need to test every claim on every product listed. This would be a difficult and expensive process requiring a plethora of skills. It would require online marketplaces to change the way they operate by requiring a guarantee to the consumer of product quality. E-commerce providers should do some level of due diligence on the products they sell. However having them guarantee the quality of all of their offerings is too huge a step. They should attempt to push the counterfeit product risk back on their suppliers.

Establishing trademark and contributory liability are the key differences here. This would require significant retooling of methods to detect counterfeits.

It can be difficult to determine whether a product is counterfeit until it is in one’s hands and tested by the brand owner. Trying to identify counterfeits by looking at observable online characteristics such as price and product images is fraught with false positives.

What are marketplaces to do? They may employ a growing army of reviewers, similar to the way that Facebook has hired more moderators to police content. They may limit doing business with new sellers, sellers from China, and sellers with low prices. If we are willing to accept higher prices and lower selection alongside higher safety, consumers will tolerate that trade off.

If we expect an elite level of precision — low false negatives and low false positives — this will benefit the larger marketplaces that have training data for machine learning.

I’m not a big fan of regulation but, between the cowboy tactics of Amazon, Facebook, Google, Twitter and others in the last decade, it looks like regulation time is here. It happened to the auto industry, the railroads before that and I’m sure with wheel at the beginning of time. C’mon, take some responsibility for what you say and the things/effects you propagate! Chaos and nihilism are really not cool after a while.

The easy answer is yes. Like many things the devil is in the details. Given the number of items the marketplaces carry it would be almost impossible for them to ensure all products are genuine.

I don’t think the question is “will this (or something similar) become law?” It’s really “will it make much difference?” That is, is “solving” counterfeiting really as simple as passing a law? The answer to the first is likely “yes.” To the latter, most certainly “no.” We’ll probably see “feel good” legislation that will mandate retailers to take certain “pro forma” steps which will allow for political crowing and which will reduce, but not eliminate the problem.

As for the broader issue of should someone pay a penalty for selling counterfeits: a believer in efficient markets and (rational) consumer behavior would say they already do.

Yes consumers need to be protected from purchasing counterfeit products. Brands need the protection for their name and products. Amazon and other marketplaces should be held responsible for ensuring their site does not sell counterfeit goods. The unfortunate part of this is that there are literally millions of sellers on Amazon and it’s no easy task to figure out who is selling legitimate items. Vetting the sellers when they set up the account would help, however what do we do with the millions of sellers already on the platform? I’ve watched Amazon try to crack down on counterfeits and I’ve watched innocent resellers have their listings taken down because of a false positive. Bad actors are actually filing inaccurate “counterfeit” claims with Amazon just to take down their competition. Amazon needs to do a better job at monitoring for counterfeits, but it also needs to ensure that legitimate sellers are not caught in the net. They need to take a serious look at how they are working on this problem and find a way to… Read more »
1
|
0
-   Share

Braintrust
"It is time the online traders have the same responsibility as traditional retailers. "

"Amazon needs to do a better job at monitoring for counterfeits, but it also needs to ensure that legitimate sellers are not caught in the net."

"Establishing trademark and contributory liability are the key differences here. This would require significant retooling of methods to detect counterfeits."