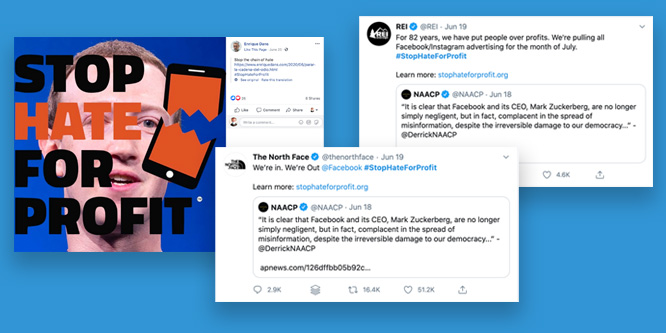 REI and The North Face on Friday became the first prominent firms to agree to stop buying Facebook ads because of how the platform polices hate speech and misinformation.

Last Wednesday, #StopHateForProfit, a coalition supported by the NAACP and the Anti-Defamation League, began calling for advertisers to suspend their marketing on Facebook in the month of July due to such concerns. The campaign comes amid rising scrutiny of Facebook’s largely hands-off approach to political speech.

“We have long seen how Facebook has allowed some of the worst elements of society into our homes and our lives,” said Jonathan Greenblatt, CEO of the Anti-Defamation League, in a statement.

REI tweeted, “For 82 years, we have put people over profits. We’re pulling all Facebook/Instagram advertising for the month of July.”

The North Face said in a statement, “The North Face is halting all U.S. paid advertising with Facebook until stricter policies are put in place to stop racist, violent or hateful content and misinformation from circulating on the platform. We know that for too long harmful, racist rhetoric and misinformation has made the world unequal and unsafe.”

Over the past few weeks, Facebook has come under criticism for how it has handled posts from President Donald Trump. Amid the protests over racial injustice, Mr. Trump described protestors on Facebook as “thugs” while suggesting, “when the looting starts, the shooting starts.”

On Friday, Facebook said it is talking to both advertisers and civil rights organizations to become “a force for good to fight racial injustice around the world,” the Journal reports.

In 2017, YouTube saw several brands pull their advertising after finding their ads running alongside extremist and racist content on the site.

DISCUSSION QUESTIONS: What should guide decisions on whether retailers and brands pull advertising from a social media platform due to content? Do you think that Facebook crosses the line?

Please practice The RetailWire Golden Rule when submitting your comments.
Braintrust
"Look at your current customer and future customer base, your own brand values, and make decisions that align with those fundamental priorities."

"We live in a society where unfortunately the balance between profit (did I mean to say greed? Yes I did…) and social consciousness are way out of balance."

"Facebook’s hands-off policy worked in a more benign time, but in the era of deep fakes and purposeful untruths that policy needs to change."

Faecbook’s troubling decision to put profits over truth have put advertisers in a tough position. No one wants to present their product or service on a platform that shares lies and hatred. Facebook’s hands-off policy worked in a more benign time, but in the era of deep fakes and purposeful untruths that policy needs to change.

Touchy issue which, to me, depends entirely on a brand’s positioning (and target customer). If the conversation can be framed around the idea of “truth” vs. anything political, AND your brand has matched the importance of that within its full life’s journey, I’d say yes. Otherwise, staying quiet is NOT saying “we’re behind misinformation,” so, I’d hold off. The brand should be able to answer the question, or not.

Lee, I strongly disagree. Staying quiet IS saying “we’re behind misinformation.” That is just like staying quiet about any other egregious issue.

The key here is that these advertisers are being “asked” to take action against a third party, in this case Facebook. They are not initiating these actions on their own. The implications are clear — help us hurt Facebook or we will try to hurt your business. Any time a retailer or other business responds to demands from groups with a social or political agenda they are effectively allowing themselves to be blackmailed. Set aside the question of whether the group, cause or issue is “good” or “bad.” That is a judgement that individual consumers will make based on their own paradigms. Sometimes the shoe will fit one foot for you — sometimes the other. Company leaders certainly have the right to take any action they deem in the best interest of the company if they choose to. But reacting to external group pressures is bad policy.

Advertisers should advertise where they feel it will do the most good for whatever reason they choose. We would assume these retailers don’t advertise on media controlled by Fox for the same reasons. From Facebook’s perspective, it’s a website – it can do, or not do, whatever it wants. The fact that many Facebookians can’t discriminate between fact and fiction is not Facebook’s problem, although it is probably an indictment of the American education system.

The majority of Facebook’s revenue comes from advertising – therefore, it’s going to be the status quo on the platform until those revenues drop significantly. For those brands that can shift marketing dollars from social to other medias with similar ROIs, I would do it now and move on. I don’t see this getting any better soon.

Like it or not, ethics are roaring back into a company’s business model for revenue and profit generation. That means retailers and brands will be held accountable for all their business decisions. Look at your current customer and future customer base, your own brand values, and make decisions that align with those fundamental priorities.

I believe Facebook has crossed the line. They are more interested in profit than people. They are partly responsible for the political situation we now find ourselves in. They claim platform immunity but are really just courting favor in DC. What they are doing is giving a voice to the darkest element in our society and they are on the wrong side of history. They cannot be neutral when faced with fascism and white nationalism, they need to stand up for what is right.

We live in a society where unfortunately the balance between profit (did I mean to say greed? Yes I did…) and social consciousness are way out of balance. I know it’s hard to draw a line between free speech and decency, but wherever that line should be drawn — Facebook can do better. Putting a little pressure on the profit (greed) side of the equation seems like a good way to strike the balance right now.

In our work, and that of others, it’s increasingly clear that post-COVID-19 and with the broad movement against racism, corporate positions on these issues and corporate social responsibility matter to customers. While it remains to be seen how those customers view advertising on Facebook and actions to combat racism, there is at least a large segment that is going to hold brands responsible for their actions or inactions that do good or harm to our society.

It takes corporate leadership to make tough decisions and REI, The North Face and agencies like 360i, have all done so. They should be commended.

Disclosure: I am an immediate past ADL Regional Board Chair and continue to support the organization and the boycott against Facebook.

Presumably, companies advertise on Facebook because their customers are on Facebook. Unless or until that changes, I don’t think this accomplishes much beyond a certain amount of self-congratulation in the PR depts.

Just consumers vote with their wallets, retailers and brands must do the same with their advertising dollars, based on their internal ethics and those of their shoppers.

Braintrust
"Look at your current customer and future customer base, your own brand values, and make decisions that align with those fundamental priorities."

"We live in a society where unfortunately the balance between profit (did I mean to say greed? Yes I did…) and social consciousness are way out of balance."

"Facebook’s hands-off policy worked in a more benign time, but in the era of deep fakes and purposeful untruths that policy needs to change."