Starbucks is everywhere – or soon will be 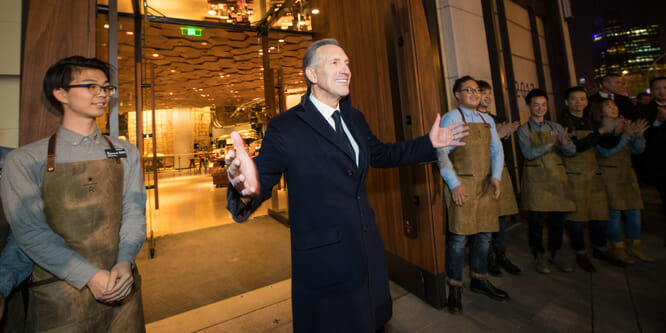 In some cities around the U.S., it seems as though the biggest competition any particular Starbucks store faces is another Starbucks down the street. In the future, there may be even more such scenarios based on an internal memo obtained by Yahoo Finance from Starbucks executive chairman Howard Schultz, which predicts that retail space will soon be cheaper to rent.

“We are at a major inflection point as landlords across the country will be forced (sooner than later) to permanently lower rent rates to adjust to the ‘new norm’ as a result of the acute shift (consumer behavior) away from brick and mortar retailing to e-commerce,” Mr. Schultz wrote, according to the report.

Lower rents come at a good time for Starbucks as the company has just opened the first of its high-end Reserve stores that include pricier coffee, cocktails and Italian baked goods and other foods. The first Reserve store is in Starbucks’ headquarters building in Seattle with others planned for Chicago, New York, Milan and Tokyo over the next two years.

The Reserve store, according to a Seattle Times report, is the fulfillment of Starbucks’ “third place” concept where people have a place to be together outside of home and work.

“We want to be a part of the community and are looking forward to being a stop on the way to sporting events, on the way to theater, on the way to concerts,” Shauna McKenzie-Lee, director of operations for Starbucks’ Siren Retail line, told The Seattle Times.

DISCUSSION QUESTIONS: Do you agree that retail rents are due for a “permanent” drop in the near future? What do you think retailers are most likely to do with the newfound money that will come with lower rents — remodel stores, open new locations, drop it to the bottom line, etc.?

Please practice The RetailWire Golden Rule when submitting your comments.
Braintrust
"If the retail rents are truly decreasing, then perhaps we should expect a continued acceleration of showroom-like hybrid retail operations."

17 Comments on "Starbucks is everywhere – or soon will be"

From a simple supply/demand standpoint, Schultz is right. And while there’s plenty of economic data that suggests that a glut of retail space exists, not all retail space is the same. There’s lots of bad retail locations that landlords can’t give away, but good retail locations are still hard to find and command a high price. And let’s not forget that, despite the store closings, there have been plenty of new store openings, some of which are being driven by online entrants looking for brick-and-mortar locations. I don’t see rent declines being a huge windfall for retailers.

Landlords have to do something to keep their spaces full. Better full at a little less rent than empty with no rent. The money the retailer saves can be used for many different reasons other than just profit. They can staff for a better customer experience. They can expand to more locations for customer convenience. They can use money to grow their digital and online presence to strike a better balance between on-site and online sales.

I guess it is better to have yet another Starbucks than an empty retail space for the good of the overall neighborhood. In NYC however, landlords seem to be hellbent on not lowering the rent and would rather keep a space empty for five years than give in. It seems like there is certainly a market for pop-up stores especially for brands that may not normally have their own retail space to stay close to the consumer and shopper.

I do think retail rents are due for a drop in the near future. We have seen how a reduction in corporate tax rates has sparked growth for many retailers — so too when rents are lower. More retailers will expand but, more importantly, new retailers may get into the market with unique types of stores to lure consumers out of the home. Online shopping will continue to grow so we need more attractive, innovative and creative retail stores.

It is no secret that the U.S. continues to be largely over-stored in terms of square footage compared to other countries, even as the online business continues to accelerate. Landlords have been wishing and hoping that they could hold but it will break at some point. The turnover that I see is very high and new stores are coming in and going out and changing locations at surprising rates. That is costly to a landlord. Any landlord would eventually be pleased to get a solid Starbucks, even at a lower rate.

Starbucks is already ubiquitous as it stands and the demand for the product couldn’t be greater. What will clearly differentiate the cafe will be the emergence of the Starbucks Reserve brand, which will focus on a transporting journey rather than the transactional experience we see today. The brand is due for a new in-store look, and the Reserve design may be the secret sauce to retain and gain new Starbucks fans.

If retail rents are truly decreasing, then perhaps we should expect that there will be a continued acceleration of showroom-like hybrid retail operations, to capitalize on the experience and digital first consumer. Smaller storefronts with a curated assortment, friction-free shopping experience and personalization driven by insights are the wave of the future.

Also retailers, including Starbucks would benefit significantly by establishing closer ties to the communities they serve and raising their level of social and environmental consciousness, which is top-of-mind with the majority of consumers.

First of all, I don’t think that the populace is wanting for a “third place” to be outside of home and work, but it’s bold of Starbucks to try to take credit for people leaving their homes.

We’re over-stored, so it makes sense that retail rents are dropping. What I’d like to see happen is that the rent drops create an opportunity for more indie retailers to gain a foothold.

Starbucks is doing what it takes to continually re-interest consumers and stay relevant, but what can I say? I’m a product of my (Millennial) generation and I’ll always prefer diversity to monopolies.

Landlords will only lower their rents when they can’t fill the space. Almost every day we are reading about another e-commerce company going into brick-and-mortar, and there is no doubt the retail store we once knew continues to evolve. There are also other new companies being formed every day also needing space, so it comes down to demand. If a landlord can fill a space the landlord will and if they cannot, they’ll cut deals. But to say that all rent will come down I think is highly unlikely in the near future. As for Starbucks, I see many new brands getting in the coffee industry and, as that continues to happen, that might make Starbucks rethink their business model forcing them to lower their prices. Supply versus demand … that’s the way it always has been and that’s the way it will always be.

No landlord wants an empty space. In general, the longer it is empty the lower the rent they can ask for. However, as Mark noted, not all spaces are equal. Starbucks would be well advised to continue to be careful in its selection of locations.

What does the open space mean for other retailers? It means several things, one of which is to think carefully about their approach to retail. Being overly dependent on brick-and-mortar locations can be detrimental to your business’ health.

Generally, there is pressure on rents. However, the picture is very mixed across the country. In the Phoenix metro area, retail rents are rising – even though an extra 2.8 million square feet of retail capacity was added last year (most of it in Scottsdale)!

Generally in the U.S., there is a good opportunity for most any retailer to open stores in vacant properties. Investments will depend on the retail company. Not all of them need additional locations, for instance. They may need to optimize the locations they already have by moving some to better locations.

Retail rents definitely will be declining … the question is, “What’s next?”

Sure, more experiential retail (like Starbucks) will fill in some of the vacant space, but also hybrid showcase-fulfillment center retail hubs may emerge as well.

We may also see community groups taking over spaces, like arts and crafts stalls, farmers markets or local club headquarters, etc. Some “zombie” mall parking lots are already being used in just this way.

Perhaps we’ll see a reemergence of a “town square.”

The real question is not are rents going to drop but how much are they going to drop. Just take a look at what is happening to the REIT stocks.

For the second question, what are retailers going to do with the money they save? I think the answer is simple — they have already spent it or will be forced to spend it in raising wages.

In the face of a general supply/demand imbalance, landlords will face the same decision that retailers do: lower the price vs. differentiate the product.

Sometimes, improving the space to attract more shoppers, making it more desirable for retailers, will be a better long-term option.

In most places rents will decrease — but there are still bubbles where it won’t make much of a difference. Since we are over retailed it’s a great time for retailers to experiment with stores — permanent and pop-ups as well as leverage their spaces to create unique and omni channel experiences (front and back of house).

This is smart placement and thinking by Starbucks as they plan for their future. Retailers will continue to do with the newfound money that lower rents offers … they will drop it to the bottom line and keep it. Why shouldn’t they? These are simply better profits as the retailer maximizes their operating costs.

With malls closing and vacancies even plaguing SoHo, a rent reduction is in order. I don’t have a crystal ball, so I can’t determine whether that will be permanent. But retail needs to get more creative as consumer interests and expectations are changing faster than ever. As mall’s attract grocery stores, restaurants, and gyms as unlikely anchor tenants, Main Street retailers and landlords alike will need to change their approach. If retailers find themselves with extra cash, improving the customer experience with it will always pay dividends.

Braintrust
"If the retail rents are truly decreasing, then perhaps we should expect a continued acceleration of showroom-like hybrid retail operations."