Strong women execs: be ‘authentic’, just don’t be yourself 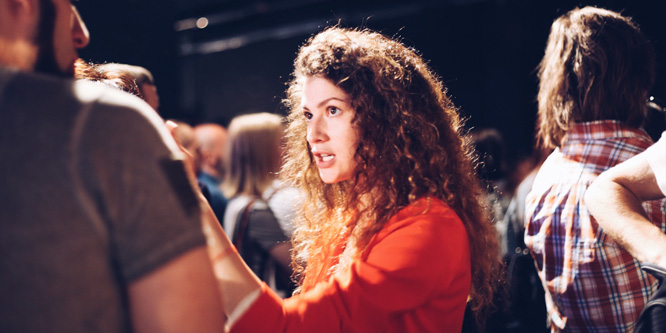 “I just love bossy women,” actress, director and writer Amy Poehler once said. “To me, bossy is not a pejorative term at all. It means somebody’s passionate and engaged and ambitious and doesn’t mind learning.”

While some women execs with c-suite aspirations may have found being a “bossy” straight-shooter works, most report that rising in the ranks of business is like navigating a minefield, even if you back off from your aggressive style, according to respondents of the newly released “Advancing the Future of Women in Business: A KPMG Women’s Leadership Summit Report.”

For the study, KPMG surveyed 550 “high-performing executive women who are 1-2 career steps away from the C-suite.”

A woman’s leadership style is a touchy subject, replete with nuance and contradiction. Most women execs recognize that workers have a different set of expectations for them than men, but leaning too heavily toward one leadership style vs. another, according to survey participants, can label one in turns “too bossy or demanding,” “not aggressive enough,” “not collaborative enough” and “too direct.” One respondent said, “Women are expected to be warm and not transactional, but still ‘completely in control’.”

The study examined “authenticity” as a component of leadership and looked at how women execs perceive that quality. Authentic leaders “practice their values and principles consistently — sometimes at substantial risk to their careers — and lead with their hearts as well as their heads,” wrote the study authors.

It seems, however, that “leading with one’s heart” may be code in many organizations for needing to back down from strong stands. One survey respondent reported being coached to “be more vulnerable,” saying that “it seems female leaders are more accepted when they exhibit that behavior.”

Almost half (49 percent) of respondents to the survey said that, while they identify most with the “Authentic” leadership style as defined by the study, they’re unsure if it’s the quality they need to succeed and feel they must compromise their authenticity as they reach top positions.

Reading between the lines, if “authenticity” means being oneself and you happen to be the “bossy” type, the workplace may not be quite ready to accept you for who you are.

DISCUSSION QUESTIONS: In your experience, is the workplace ready for strong, authentic women leadership? If so, how do you define the style of authenticity that makes for a successful female business leader? And if not, what style of leadership should women execs adopt?

Please practice The RetailWire Golden Rule when submitting your comments.
Braintrust
"There are plenty of high-powered women in all sorts of roles, at all levels, including the C-suite. I’m certain they didn’t get there by pretending to be someone else."

"Maybe a better question is, “Is the workplace ready to oust ubiquitous, ineffective MALE leadership?”"

"Success is there for the taking for women who won’t stop when they’re faced with what the patriarchy would have them believe are their limitations."

17 Comments on "Strong women execs: be ‘authentic’, just don’t be yourself"

I don’t think “style” should be the concern. It starts with ability. Whether it a be a man or a woman, employees are going to respect the executive when that person can demonstrate their ability to lead, make decisions, avoid internal politics, implement impartial leadership and most importantly get things done. There is no doubt that women have to deal with many unfair acts because when women are successful, some men have an attitude of “how can that be” supported by cruel and unjust statements of lies and exaggerations. However, the workplace is continuing to adapt, and more women each day are moving to the top of their companies. As for the individual, “yes” being yourself matters the most, but if she has the right qualities for the position and the woman is confident in her role, she will do exceptionally well.

Given that there is not one type of woman (or indeed, one type of person), there is no one style that is suitable. It depends on circumstances, the type of business, and the teams involved. What people generally want from leaders – of any gender – is ability, fairness, empathy, and clarity. Women are just as capable of delivering on these things as men – as the many successful female executives in retail and elsewhere have proved.

Is the workplace ready for strong, authentic female leadership? Really? REALLY? What do you think we’ve been doing all these years? And “just don’t be yourself?” Come on.

This type of survey annoys me. Stop trying to tell women who and what we are supposed to be. There are plenty of high-powered women in all sorts of roles, at all levels, including the C-suite. I’m certain they didn’t get there by pretending to be someone else. I know I didn’t.

Once upon a time I thought social progress has been steady and strong. The fact that this is even a conversation tells me, once again, I was wrong.

The fact that we are even having this conversation is embarrassing. Good God. Are men that fragile, still?

We lead with our best authentic selves, I would NEVER counsel a women to “not be bossy.” I do counsel them not to cry.

Now I think I’ll counsel them to just start their own businesses where they can be as bossy as they want to be. Good heavens!

Amen, Paula. The fact that the conversation still needs to happen is embarrassing.

The majority of my career was spent in the middle management roles this KPMG study focuses on. It was when I started owning my own leadership style – and really, who I am in it’s entirety – that the world of being an executive opened up. Based on what I’ve seen, men go through the same transformation in life.

So in my experience, authentically owning my style has helped me excel. I don’t view my style as “female.” My goal is to be seen as a leader who is communicative, fair, decisive, and passionate with an extremely clear vision.

KPMG just tossed out some clickbait, and we bought it. Shame on us.

I need to use the term “clickbait” more.

When was the last time anyone debated or ran a survey about “bossy” male executives? Why then do we continue to engage this discussion exclusively concerning women? We should be talking about the ability to execute, ability to lead others, skillful decision making, creativity, the strength to be impartial, and so on – all qualities we’d all like to see in any corporate executives. These are not women vs men qualities, they are just qualities you want in your execs. I don’t see any value in surveys like these as they just continue to promote concepts that should be left to history so we can look back and say “why did we ever believe that?”

Yes, we should have moved on from this “debate” a long time ago.

I’ve been lucky enough to moderate several leadership round table discussions, many of which featured women who lead major retail chains.

Here’s what I learned: As we move into the human economy and past the knowledge economy, those with heart will win the day. In my humble opinion, companies led by women typically have significantly more heart and authentic leadership. Sign me up to work with any of them any day.

It depends on the workplace. In my experience, men in power are willing to give women opportunities, so long as they can take a paternal, guiding role in that woman’s career. It’s when women come back with our own ideas and expectations that we really come face-to-face with the limits of patriarchy, which is why so many of the successful women that I know have created their own businesses where women have are in positions of power and grandfatherly tokenism has no role. I’m not going to discount the struggles of women and minorities by saying that it isn’t still a challenge to carve out a niche for yourself in a white man’s world. However, there are more women and minorities in management positions than ever before who have had their own struggles, and are focused on helping others like them level-up through mentorship and paid opportunities. The bottom line? Some corporations are still scared of powerful women, but many aren’t— success is there for the taking for women who won’t stop when they’re faced… Read more »
3
|
0
-   Share

Advancing the future of women in business? Are you kidding me? To put things in perspective, the real question is, is the workplace ready for strong, authentic men? If so, what defines the style of the authenticity of a successful male business leader? And if not, what style of leadership should men execs adopt? Those are the questions KPMG should be asking men. Women already know the drill of navigating in a world dominated by the brilliance of the “faux” lip-service study performed by the men at KPMG.

I currently work with multiple global Women Business Owner organizations and interact directly with their member CEOs each week. It REALLY bugs me that our society even has to discuss this. You ask, “…is the workplace ready for strong, authentic women leadership?” HUH?! Maybe a better question is, “Is the workplace ready to oust ubiquitous, ineffective MALE leadership?” I see nothing but exceptionally-talented women business leaders in my work. They run wildly-successes companies and earn the respect of their teams. It’s time we focus on effective leadership qualities and stop the deep-rooted gender bias.

Thanks, Paula! This stuff makes me CRAZY!

Braintrust
"There are plenty of high-powered women in all sorts of roles, at all levels, including the C-suite. I’m certain they didn’t get there by pretending to be someone else."

"Maybe a better question is, “Is the workplace ready to oust ubiquitous, ineffective MALE leadership?”"

"Success is there for the taking for women who won’t stop when they’re faced with what the patriarchy would have them believe are their limitations."