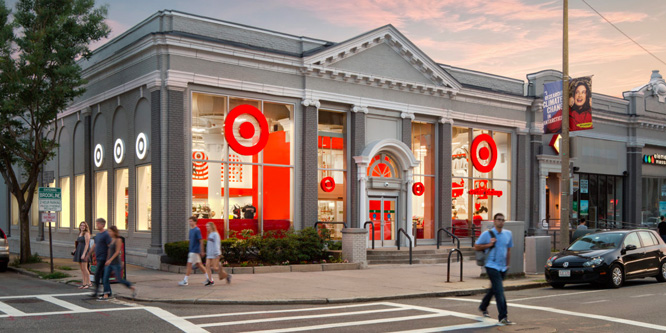 This fall, Target will open three additional smaller format stores — at the University of Kentucky, Michigan State and University of Washington — to bring its total count across college campuses to 23.

The college stores are building on the chain’s success with small format locations. Target said it now has nearly 100 small format stores across the U.S., from college campuses to urban centers. The retailer is set to open 30 more annually over the next few years.

Target’s college stores — averaging around 20,000 square feet — are “designed for quick and convenient trips, and stocked with locally relevant products at affordable prices,” according to a press release.

Many include Starbucks concessions, complete with seating areas and charging outlets. “We want to help make students’ experiences fun and easy, serve up products and services they’ll love and show them the best that Target has to offer, so they become lifelong guests,” said Mark Schindele, SVP, Target Properties.

Retail options on campuses have traditionally been confined to bookstores but have expanded in part because universities are recognizing that offering convenient shopping boosts the college experience and recruiting efforts.

Retailers are also recognizing an opportunity to support burgeoning online orders heading to campuses from parents. Target is touting its stores as “convenient hubs where guests can go to pick up orders from Target.com.”

Among major retailers, Amazon has also been aggressive, opening a number of fulfillment centers on or near college campuses.

Walmart has a 3,371-square-foot store on the University of Arkansas campus and two others at Arizona State University and Virginia Commonwealth University but has closed others on campuses with the demise of Walmart Express.

Please practice The RetailWire Golden Rule when submitting your comments.
Braintrust
"College bookstores will need to compete with Target and raise the bar on price, service, quality and a seamless online/offline customer experience."

"Target gets the need to grow customers from a young age."

College campuses have not emerged into a viable growth opportunity, they have ALWAYS been a growth opportunity. College students are needy (always looking for convenient ways to buy needed items). While online has cut into some of their needs, retailers who establish a presence at college can drive short term sales and engender long term loyalty.

Colleges have always offered retail opportunities in the form of the cafeteria, snack bars, bookstores and more. The smaller format Target has an opportunity to serve in some previously underserved categories. This concept should have better success on larger campuses – where scale will certainly aid in bringing a return on investment.

College campuses should be a focus of viable growth for retail chains. These communities and students have very similar needs as it relates to their living requirements. This defined community allows retailers to stock the essentials in a small footprint. In this particular case, Target should expand their in-store services to include Amazon pickup and returns – a Target branded shipping/receiving (and hold for pickup) service. How about a laundromat? There are numerous avenues to explore for innovative retailers of all sizes on college campuses. The demographic and its requirements rarely changes and is replenished every year!

For a store like Target, college campus locations are a viable volume opportunity in their own right. But more importantly, it’s a chance for the Bullseye brand to develop loyalty at the earliest point where young consumers are buying for themselves. If college grads move to urban centers for their first jobs — and Target’s small-format stores are waiting for them — it can be the beginning of a lifelong relationship, both in-store and online.

Campuses are great marketplaces for retailers, provided they understand the audience and tailor their offers accordingly. Moreover, if retailers do a good job they can capture the attention and loyalty of new consumers early on in their lifecycle.

I also hope retailers like Target will put an end to the discriminatory pricing that can exist in stores near colleges. Hannaford, for example, inflates its prices in the store near the University of New Hampshire as it’s the only supermarket on campus and assumes it has a captive audience. That’s not the way to stimulate shopper loyalty!

The college market is an especially vital one for retailers right now because younger generations need to be “educated” about the value proposition of physical store retail in conjunction WITH e-commerce. Target’s college stores are also a canary in the coal mine for college bookstores across the country. Students are time pressed and thrifty so a one-stop shopping experience for ALL of their dorm life needs (well beyond books) will be well received and quickly adopted with success. College bookstores will need to compete with Target and raise the bar on price, service, quality and a seamless online/offline customer experience.

Call me biased, but this is yet again another opportunity for a pickup in-store feature, even moreso because of the location and demographics of a college student. There’s also the prestige of shopping at “Tar-jey.” I for one wish I had this back in school. The only places to go were off campus or the UC, and prices were ridiculous. I see this as a success for them in the future and expect it to expand even further. One challenge though may be the higher percentage of theft/lift in the stores, thus more inaccurate inventory (and therefore higher number of shorted BOPIS orders that can’t be fulfilled).

Retailers should see college campuses as a huge growth opportunity. Co-eds like to acquire products that help define them as they define themselves. I imagine treasure-hunt experiences are perfect for this subset. For that reason, I’m not sure BOPIS should be a top priority for retailers seeking to woo college kids. Gen Z has expressed a fondness for in-store shopping. Beyond this, most college kids are only in class for a few hours a day, and are often looking to escape off campus for excitement. I’m not sure convenience is at top of mind for them as much as it is for, say, working Millennials.

Absolutely Heidi. Great points. I’m thinking the “in between classes” BOPIS experience to get household essentials or snacks (or adult beverages?).

Yes, I suppose they need the necessities as much as anyone else. 😉

What better place to drive solid experience and develop long term customer loyalty than college campuses? Barnes & Noble had a winning formula with their college bookstores, yet the smaller format Target stores offer a variety of assortments beyond simply school supplies and books. Target could position itself as the “go-to” destination for all college lifestyle needs, and near the doorsteps of the college campuses.

The challenge for Target is for the company to offer value, pricing, promotions, and the very “targeted” experience that university students need. Target should go all-in on this outstanding opportunity.

As a University professor, I learned early on that college students are eating and drinking machines. Years ago, the university’s foodservice provider experimented with a vended pizza in several of the dorms. As a teacher of ethics, I am compelled to report that the experiment failed. Why? Because they couldn’t keep the machines stocked!

Target’s smaller formatted stores represent a terrific niche strategy. Remember, there are riches in niches. The next evolution will be delivery from these stores.

College campuses are communities. Like little towns (or even pretty large towns). They offer the same opportunities. Retailers who can offer gathering places or products that are needed will be successful. But particularly with this demographic, if it is easier to buy online — they will.

Well, looks like the “old” paradigm of the college bookstore is completely reshaped. This started when national bookstore chains entered and started taking over text book sales. The colleges and universities still exercised great control over the traditional offerings/operations of the bookstore. Now we see what should have been obvious for years, the retail world makes its appearance. Yes it is an opportunity for these major retailers to garner the why’s of purchasing decisions and buying habits of this important generational group. This brings big change to the school’s traditional control of the bookstores. However, I am sure there will be strong input from the schools on licensed products’ availability and controls. All that being said, we knew this time would come.

Almost every college kid is familiar with Target so this move is a no-brainer. It’s a solid opportunity for Target, provided it understands the market, the customer and, as Neil pointed out, has fair pricing.

I have two family members in college right now. When asked where they’d like gift cards from both said Target – Target gets the need to grow customers from a young age.

The question really is about whether retail chains want to move in convenience. The nature of college campus stores goes beyond the bookstore — which effectively are running a feverish semester-based sales cycle. Throughout the year however, c-stores drive purchasing on college campuses. Retailers that can design and adapt to c-store conveniences with a little expansion of their assortment have a leg up.

Colleges are a captive and naturally renewable market — students (who need well-priced basics and fun items) and parents (who want to send students supplies).

I (continue to) think the fascination with college stores — along with “urban” stores — reflects a saturation of conventional formats more than any intrinsic value. It’s hardly a new market. Colleges have been around since what, 1620? And retail has been right there along with them the whole time (often in the form of student-run stores that presumably will have an edge on student loyalties).

A bigger purpose for retailers than the actual sales value, I imagine, is the opportunity to introduce the young to their label … though in this day and age, it’s hard to imagine anyone not being familiar with Target long before they set foot on campus. But no harm in trying (and if Target could have more kewl looking stores like the one at BU, that WOULD be a competitive advantage 🙂 )

This is about two things: community building and convenience shopping, both of which are embodied by college campuses and students. Target is very wise to increase their footprint in this environment, not because college campuses are suddenly a growth opportunity, but because Target has realized they have a customer base here who not only recognizes their brand, but can build increasing trust with them by being where those customers need them to be, and providing the products they need at that time (the convenience factor). Adapting to what your customer needs when they need it is what omnichannel was supposed to be about, wasn’t it? Good move, Target!

Braintrust
"College bookstores will need to compete with Target and raise the bar on price, service, quality and a seamless online/offline customer experience."

"Target gets the need to grow customers from a young age."