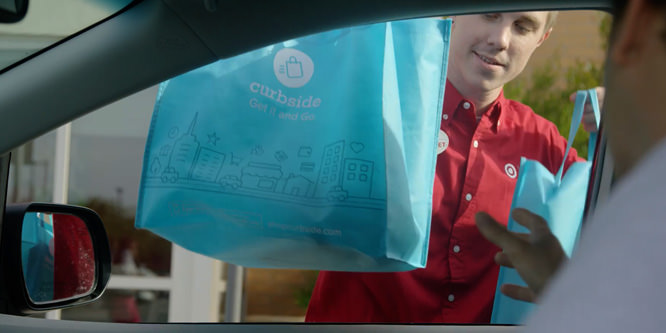 Hopes were high back in 2014 when Target launched a pilot of the Curbside mobile app in San Francisco. While the retailer later expanded the test to include stores in Chicago, Los Angeles, New Jersey, New York, Philadelphia and other locations around the San Francisco Bay area, the trial failed to produce the results Target was looking for. The company announced it would discontinue Curbside in its stores on June 15.

According to a Consumerist report, Target has decided to focus its digital efforts on in-house programs including Cartwheel, in-store pickup and using stores to ship online orders.

Back in October 2014, Jason Goldberger, who was recently named Target’s chief digital officer and president of Target.com, said Curbside and a host of other mobile apps the company was rolling out at the time would all play a role in “making it easier than ever for guests to shop Target.”

Editor’s note: Having attempted to use the Curbside app at a local Target in New Jersey, we found that it was not a time saver since many of the items our household regularly purchases from the store were not included in the app’s list. Ultimately, someone would need to go inside the store to complete our shopping basket.

DISCUSSION QUESTIONS: What do you see as the pros and cons of online programs facilitating orders picked up inside stores versus those done at the curb or designated area in the parking lot? Do you expect Target to pursue an order pickup program outside its stores even though it is ending its test with Curbside?

Please practice The RetailWire Golden Rule when submitting your comments.
Braintrust
"The customer is going to get her way. If she doesn’t want to have to go into the store, winning retailers will not force her to."

"The key is getting the customer in the store, not just to the curb."

"The strategic war between the “gotta get them in the store” folks and the “give it to the consumer any way they want it” folks will continue..."

14 Comments on "Target kicks mobile pickup app to the curb"

While “click-and-collect” provides the opportunity for customers to enhance their shopping visit by going into the store to add items, particularly high margin items (think flowers, imported cheeses, etc.), the challenge remains to merge the needed logistics and technology to make the process both seamless and profitable. Research demonstrates that shoppers who used a combination of curbside pickup and in-store shopping spent 65 percent more than those who shopped in-store only.

Obviously, many brick-and-mortar retailers are struggling with how to do this in an efficient and profitable manner. There are terrific upsides as noted above, that can be realized once we figure out the best method of click-and-collect. Having said this, I don’t believe Target is done with this concept. There will be new pilots to test by Target and others.

It’s great to try new ideas but in the end, someone has to look at the return on investment. I think most retailers are finding that many click-and-collect, at your service, one-hour delivery to deliver options generate buzz but drain resources that could get much higher returns. The sleeping “big idea” in most stores is actually training their employees how to boost KPIs — the center of any omnichannel customer experience.

It’s interesting to see Target reach such a quick judgment on Curbside as these mobile e-commerce tools are still in their infancy. It appears that Target did not give the app much of a chance to succeed. By offering only a subset of commonly purchased items through the app, they defeated its purpose and convenience and probably doomed it from the start. Retailers need to go “all in” with their testing of e-commerce and mobile solutions to determine their viability.

It is completely understandable that a brick-and-mortar retailer would want consumers to go into the store to pick up an online order in order to drive shopping trips. And some consumers would undoubtedly prefer it at times, if a customer forgot to order an item she needed, or wanted a cup of coffee. Drugstores like CVS and Walgreens have faced similar questions, but have chosen to build drive-thrus despite the loss of front-of-store sales opportunities when people come in to pick up their prescriptions. They have decided that as much as they’d like to keep all of those trips and corresponding incremental revenue, they’re in a competitive retail environment and cannot risk losing customers. I believe that this sentiment will prevail in the long run. The customer is going to get her way. If she doesn’t want to have to go into the store, winning retailers will not force her to.

The curbside pick-up has great applicability to grocery, whereby the customer (or IoT vehicle) places an electronic order with the supermarket, the retailer assembles the order, readies it at a parking location and sends the customer a message as to an order number (QR code?) that will be scanned at the entrance to the parking lot, directing the customer to the specific parking space at which the order is staged. I wouldn’t do this with every category of product, where the customer may actually want to come in and browse, or even try-on before leaving the store. I might, however, do this with small furniture from home furnishings that doesn’t require delivery to, and installation in, the home. That said, sometimes trials fail not because they are conceptually ill-fated or flawed, but because of their execution. The latter may have been Target’s reasoning.

Ken has it dead on. The key is getting the customer in the store, not just to the curb. Once inside, the staff has to know what to do to assist the customer, with a smile and good attitude (which is lacking in many big box stores). The customer knows what they are going to the store to purchase. It is those impulse items they decide to buy which makes the shopping experience enjoyable to them. And the cash register rings …

I imagine the strategic war between the “gotta get them in the store” folks and the “give it to the consumer any way they want it” folks will continue for quite a while. But I would argue that “give it to them any way they want it” will win out in the end. To be clear, I think that will include an option to go into the store and browse. But no retail format to date has successfully fought off some form of “curbside” pickup when faced with it. Drive-thru pharmacy. Drive-thru QSR. Pay at the pump gas stations/c-stores. All have bowed to the customer’s preference to have it any way they want it.

Grocery will be the same. The challenge we need to solve is how to get the impulse items in front of the consumer when they are placing their order for curbside pickup.

Curbside pickup may not be a good fit for discount department stores like Target, but it might be a good fit for other retail formats. CONS: There are two main issues (cons) for curbside pickup that make it a challenging proposition: 1. process time and costs and; 2. customer preferences For some retailers, it may be too time-consuming and expensive to have employees picking items to fill orders, staging them and running them out to customers’ cars rather than focusing on in-store duties. From a consumer perspective, if they think of other things they need after they placed their order, they will still need to go into the store. In addition, many retailers simply don’t have a good enough grasp of what products are in stock to guarantee they have the merchandise to fill customers’ orders without a car-side discussion about whether they’re willing to take something in another color or brand. If you can’t execute curbside pickup flawlessly and avoid disappointing the customer, you probably shouldn’t offer the service. PROS: I believe curbside is… Read more »
1
|
0
-   Share

Target and Walmart are once again a study in contrasts, this time with curbside pickup.

Target partnered with Curbside, a startup that provided the app and planned to station pickup pods and fiberglass bus stop-sized booths at Target’s curbs. Walmart managed infrastructure and operations internally, building drive-thru lanes and employing their own personal shoppers.

Target and Curbside appeared to favor densely populated areas like San Francisco, New York City, Chicago and LA. Walmart has focused on smaller markets like Daphne, AL and Charleston, SC, where competitive grocery delivery services have yet to penetrate.

And while Target ends its curbside pilot, Walmart is expanding to 30 U.S. markets.

The logistics associated with order details, packaging the order and associate overhead to support what was likely an infrequent order type were all likely reasons for ending the test.

Personally, I love the convenience of shopping online, ensuring the item is priced to my advantage, placing the order and picking it up at my Sears store. The process is very efficient checking in at a kiosk just inside the dedicated door for these type of orders. For home appliances, lawn and garden — makes perfect sense. Big bulk items from a warehouse type entrance with assistance provided to load the item in car or truck and get the item without delay plus avoid any delivery charges is an advantage.

For Target, attempting to combat “loss” of market share in the grocery category to a Peapod makes sense, but their customer metrics did not sustain it.

Customers and competitors drive these decisions. Customers may want curb side service, but if none of your competitors are offering it, you are not at a competitive disadvantage. I would also expect that Target found the orders were smaller than anticipated and for items that the customer could easily price shop, meaning the margins were tighter. I believe that makes it a lose/lose for Target.

In the end, what the consumer wants — and is willing to pay for — should drive offerings. If the service was not sufficient and didn’t garner the needed financial results, it may be because the offering wasn’t right. I do believe that having many paths to purchase are better than forcing everyone through the same funnel. If this one didn’t work, likely another test of a different permutation may be forthcoming in the future.

Curbside pickup has a pro of convenience to customer (if executed well — which is not easy in terms of logistics and resources), but in-store pickup opens up the opportunity for additional spending and creating other touchpoints to reach the consumer. I’m sure they are not done testing other click and collect options. It’s still a relatively new concept and yet to be perfected.

I would list on the “pros” side both options as a means to facilitate any and all customers. These are both great opportunities for enhancing customer experience(s). On the “cons” side, we as a market own the inability to address these options successfully within pre determined budget constraints, as well as to the satisfaction of the consumer that paid for pillows and got potato chips. That said, we might reconsider the abilities of those designing these options, or at least run Alpha Testing for a while longer in less than perfect world conditions.

Braintrust
"The customer is going to get her way. If she doesn’t want to have to go into the store, winning retailers will not force her to."

"The key is getting the customer in the store, not just to the curb."

"The strategic war between the “gotta get them in the store” folks and the “give it to the consumer any way they want it” folks will continue..."