The hunt for warehouse help heats up 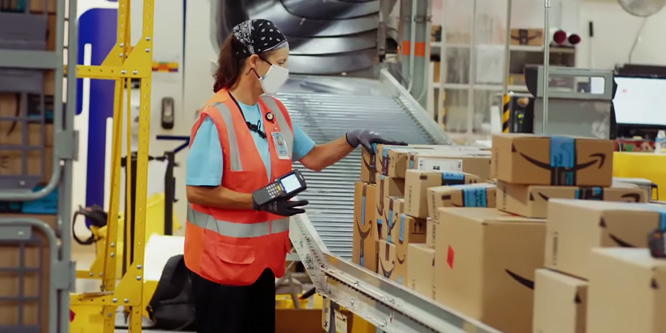 Walmart in late July began handing out temporary pay increases to warehouse workers through January 2022 as it began preparing for a busy holiday selling season.

A Walmart spokesperson told CNBC that the temporary wage increase could add up to $200 more per week for some full-time workers and more with overtime. The rate depends on the employee’s location, type of job and shift.

The Wall Street Journal, which first reported on the pay hikes, also noted that some workers are being promised $1,000 over four weeks for not missing any regularly scheduled shifts during the second half of the summer. A spokesman told the Journal the retailer’s distribution warehouses “continue to see high volume as we are preparing for peak season.”

The higher pay and special bonuses come as retailers add warehouse capacity to meet the accelerated shift to e-commerce due to the pandemic. Employers are also handing out higher pay, sign-on bonuses and other perks to store associates and other typically low-wage workers amid a tight labor market.

At Walmart, employees in distribution and fulfillment centers, excluding drivers, were paid an hourly wage on average of $20.37, well above the average wage of $14.61 for Walmart U.S. at the end of 2020, according to the company’s environmental, social and governance report.

On Amazon’s second-quarter conference call, Brian Olsavsky, CFO, said the company moved up the timeline for annual wage increases to May from October due to the competitive labor market. “We’re spending a lot of money on signing and incentives, and while we have very good staffing levels, it’s not without cost,” he said. “It’s a very competitive labor market out there and certainly, the biggest contributor to inflationary pressures that we’re seeing in the business.”

The spread of the Delta variant may further skew online holiday sales as apprehensions over in-store shopping returns and could heighten risks for warehouse work.

DISCUSSION QUESTIONS: Do you see the shortage of warehouse workers as a temporary or long-term challenge for retailers? What obvious and less obvious solutions do you see?

Please practice The RetailWire Golden Rule when submitting your comments.
Braintrust
"I think retailers are trying to keep it a short-term challenge by focusing on bonuses and trying to limit wage hikes as much as they can. "

11 Comments on "The hunt for warehouse help heats up"

A shortage of workers – both warehouse and frontline in stores – is most certainly having an impact in the short to mid term. The wage increases and other incentives are proof positive of how tight the labor market is becoming. Offering pay and other incentives is certainly a good start, but in order to create a stable, sustainable workforce, employers will need to consider long term career development programs, like subsidizing/paying for college tuition.

Finding reliable employees for warehouse work may be a long-term challenge. Warehouse work can be strenuous and exhausting and not all people can handle the environment. While the pay for warehouse work is a little higher than store associate roles, it is typically not as desirable a working environment. Higher pay and bonuses are obvious solutions to attracting more warehouse workers, however improving working conditions that make the work less physically demanding, offering flexible schedules and rotating roles could also help retain employees. Another solution is to automate more warehouse roles with robotics.

There are labor shortages across retail as a whole. If this continues it does not bode well for the busy holiday period. Without proper resourcing of warehouses and stores, we are likely to see very real pressure which will affect shipping capacity and delivery timescales for online orders.

That same $1,000 bonus that Walmart is paying in exchange for four weeks of just showing up at the warehouse would buy up to 12,000 RFID chips. And that’s just for one worker. Warehouse work is low-hanging fruit for those jobs that will simply not exist in the future. The recent rise in labor costs is accelerating that process. A combination of robotics at the DC, MFCs, and CFCs—coupled with RFID—offers some of the solutions to this labor conundrum. The use of these technologies allows us to do what is now done manually with technology. Robotic pick pack and ship to a store or your home is coming to a Walmart near you, if it isn’t already there. Regional chains are also embracing the concept. Last night on 60 Minutes they highlighted Boston Dynamics (recently purchased by Hyundai) and their robots that have the potential to revolutionize this space. Like it or not, Walmart and Amazon are working feverishly behind the scenes to reduce their dependence on humans. Automate, automate, automate. Every other retailer needs… Read more »
4
|
-2
-   Share

I think retailers are trying to keep it a short-term challenge by focusing on bonuses and trying to limit wage hikes as much as they can. But I agree with Ken that the longer this is a challenge, and the more structural the cost increases are (actual wage hikes, for example), the more there will be pressure to automate. In this case, I’m not that opposed, though there would be major structural impacts to a workforce that has moved from primarily store employees to primarily warehouse employees in a very large retail enterprise. The work, as noted, is very hard, even when companies aren’t being awful about it (as Amazon is rumored to be). It’s more than just pay that makes it hard to find people for warehouse jobs.

“Houston, we’ve had a problem” — those famous words we heard from astronaut Jack Swigert on April 13, 1970 were a bit surreal. And although not a life or death situation like Apollo 13 was experiencing, today’s hunt for warehouse help is a problem that all retailers will face not just today but for many months into 2022, especially, if new COVID-19 cases continue to rise. The issue is bigger than just pay. It surrounds working conditions, benefits, technology, data and analytics and company culture. The enterprises that can creatively attract and retain workers with best-in-class environments will come out ahead.

The shortage of warehouse operatives and drivers has brought home that fact that these, along with shop workers, have been undervalued and under paid for a very long time. These jobs have all been seen as transient jobs, ones young people do before getting a “proper job” or that people do when they retire. The demand for them now shows that retailers have to value them correctly and compensate them appropriately.

What it also shows is the additional cost of operating with increased online sales as compared with store sales. Many retailers are finding their profitability hit by the significant shift toward online business as the costs are much higher, especially with the ever increasing competition on speed of delivery.

Over a period of time, more automation will help reduce the number of people required in the back of the shop, warehouse and even driving roles. But front of shop will continue to be needed and retailers need to value these people appropriately.

I guess the most obvious solution for this problem in the short term would be to attract workers not only with increased pay, but benefits as well. Working at the warehouse could be seen as a long-term career opportunity (as manufacturing once was) and not a short term gig to bounce from after a short period. The long term (less obvious?) solution would be increased automation with robotics, AS/RS, etc. This will happen when the cost of DC/WH labor begins to exceed the cost of implementing and maintaining the system in the long run. Note, the future of distribution will be a combination of human and robotic resources with the human element taking over the more complex tasks and robotics handling the more mundane, repetitive tasks.

We are witnessing a shift in how both frontline retail and warehouse workers are valued by the brands that employ them. Part of this shift is recognizing that these employees want more than just a “job” and these positions need to be treated by the employer as part of a longer-term career path if they are to entice new workers to sign up. The market for this labor has become even more competitive and these short-term pay increases only serve to make the jobs more enticing in the short term, especially as more brands follow this approach, the differentiation starts to diminish. Now look at what Target has done by offering to pay for college – they’re starting to show a real career development path for retail employees. That’s the type of shift that needs to happen across the industry to both recognize and entice the workforce into thinking of retail and warehouse jobs as more than just “a job”. Otherwise, that labor force will seek out other industries they find to be more rewarding.… Read more »
1
|
0
-   Share

Warehouse workers are taking the place of production line employees, as the nature of manufacturing and distribution has changed. Just as production line employees’ jobs have diminished because of automation, the same will be true for warehouse workers. Until that happens, companies will be forced to pay more because it is a job that most employees are no longer interested in doing. As the labor cost goes up, automation will become a much more efficient and effective way of getting the job done until companies have to pay more to attract and retain workers.

The shortage of workers is only from a poor perspective in wages and work force appreciation. Any good company is paying their warehouse workers well (the average exceeds $17 per hour), plus benefits, incentives and bonuses. These are now the rule, instead of the exception, and this shift will drag the government into adjusting the minimum wage, which hasn’t had a wage increase since 2009.

Braintrust
"I think retailers are trying to keep it a short-term challenge by focusing on bonuses and trying to limit wage hikes as much as they can. "