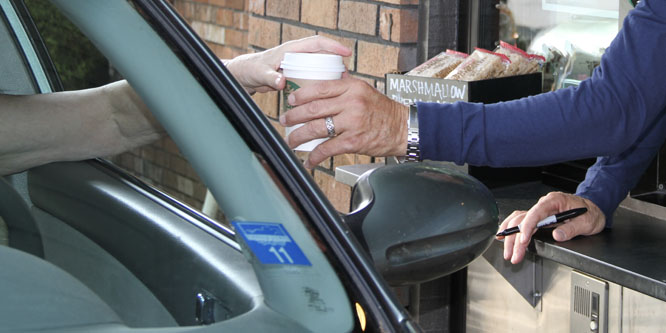 Starbucks earlier this month announced plans to begin extending rewards benefits and order-by-app functionality to more licensee locations, according to Tasting Table. Licensee locations in places like gas stations and hotels, as well as grocery stores like Kroger, Hy-Vee and Publix, constitute a significant chunk of the coffee chain’s store footprint. While Starbucks has around 9,000 company-operated stores, an additional 6,500 are licensees. Most of these licensees have not participated in the broader Starbucks loyalty program up until now (1,400 were already taking part when the expansion was announced).

Starbucks mobile ordering, which debuted in 2014, has become a popular service for rewards program members – in fact some Starbucks employees find it to be a bit too popular.

Business Insider reported last year that a number of current and former baristas said that customers were overwhelming Starbucks with app-based pickup orders. They also complained of customer rudeness and demands for complicated, time-consuming TikTok-inspired orders being made through the app. Starbucks told Business Insider at the time that the complaints were not reflective of the experience of the majority of store staff or customers.

Expanding mobile ordering capability to thousands more locations could wick off app-based orders from mainline stores and reduce barista stress or conversely it could increase the demands on licensee baristas who have been thus far spared from the added workload of app orders.

Improved staffing to take some of the strain off of baristas is one of the major demands of those Starbucks employees who are unionizing, along with increased pay, improved benefits and more control over schedules, according to CNBC. As of August, 209 Starbucks stores in the U.S. had officially voted to unionize.

The announcement about expanding rewards and mobile pay to licensee stores is not the only step Starbucks has made to expand mobile ordering options for customers.

For a few years, the chain has been experimenting with pickup only store concepts in high foot traffic areas like Manhattan.

DISCUSSION QUESTIONS: Do you see adding mobile pay and rewards to licensee stores as a necessary step in improving the Starbucks experience for customers? Will staff run into operational issues in the stores that are affected by this change?

Please practice The RetailWire Golden Rule when submitting your comments.
Braintrust
"When your name is over the door or on the marquee the customer experience should be the same. It’s good to see Starbucks address this issue."

"Starbucks must determine the right strategies and operating model to serve both customer segments and the hybrid customer, who may be a mix of the two."

"This is good to hear. I always wondered why these locations were not able to do mobile orders."

“No good deed goes unpunished” and there are almost always “unintended consequences.” We use these truisms daily but it does not stop them from happening. Yes, extending, mobile pay and rewards to licensees is beneficial to all. Besides that, we are always talking about retailers having to provide “one face” to the customers, who demands it.

Hello, McDonald’s? Starbucks should follow Mickey D’s best practices: no matter where you go the experience is the same. Not so at Starbucks. It’s frustrating for customers to be told their gift cards are not accepted or their favorite beverage is not available at certain locations. When your name is over the door or on the marquee the customer experience should be the same. It’s good to see Starbucks address this issue.

Starbucks management and staff need to communicate about how this change affects performance and the employee experience. If mobile orders pile up during rush hours, Starbucks will need more associates on those shifts to meet demand.

This is good to hear. I always wondered why these locations were not able to do mobile orders.

What took them so long?

“I am sorry, you can’t use your Starbucks card.” Huh?

“I am sorry, we can’t redeem that free cup of coffee you have earned.” Huh?

“Oh, you must have ordered online from the Starbucks down the street. We don’t accept mobile orders.” Huh?

Gene, absolutely. It has to be one of the most inconsistent scaled branded customer experiences. I’m a tea drinker and I can’t count the number of times I’ve jumped into a Starbucks and stood in line to be told, “We don’t have any black teas.” Ditto with frustration around the Starbucks card. Ditto with different sanitation standards/executions. Etc., etc.

Consistency is valued by customers, including myself. I have been disappointed at some Starbucks locations where I couldn’t pay with my mobile app. This is a smart move by Starbucks.

From the customer’s perspective, these changes to licensee stores are long overdue. How many of the millions of Starbucks customers have any idea of the difference between a company-owned store or a licensee? They only see the brand, and every store experience builds (or diminishes) the brand equity for each customer. All of which leads me to my thoughts about the risk in this strategy: It has the real potential to overwhelm unprepared stores and severely impact that brand experience. I certainly hope Starbucks has invested in operations training and extensive communications about staffing impacts and customer expectations once licensees turn on app-based ordering.

This is LONG overdue. Customers don’t care where a store is located, they care that it’s a Starbucks branded store. Providing customers with consistent experiences is a core aspect of every brand strategy. Kudos to Starbucks for closing this gap.

The new CEO, Laxman Narasimhan, and the Starbucks leadership team have an imperative to get back to basics, driving an immersive cafe coffee experience while having the scalability and efficiencies to meet the surging mobile order demands. For loyal Starbucks fans currently, the experience is not consistent across the cafe environment, service levels, digital payment capabilities and mobile order options.

As the Starbucks brand continues to evolve and grow over the next several years, there is as clear division emerging across their core customers. There is the digital mobile-first digital/mobile first customer who is on-the-go and who does not want to spend time in the cafe. Then there are other customer segments, who are all about the in-cafe experience.

Starbucks must determine the right strategies and operating model to serve both customer segments and the hybrid customer, who may be a mix of the two. Either way, it will be about brand consistency, maintaining service levels, and meeting customer expectations.

This isn’t about adding mobile pay and rewards to the licensee stores. It’s about a consistent brand experience. If the experience at a location is not typical of the Starbucks experience, that location erodes the brand’s reputation. It’s that simple. There needs to be minimum standards and consistent experiences across any Starbucks branded location, be it a company or licensee store.

This is great to see and about time. An operation like Starbucks that is so time sensitive and operationally demanding should have consistent/seamless service. Can you imagine McD’s or BK or Wendy’s fulfilling customer experience on an uneven basis? Their only challenge is matching the photography with actual product — gee that burger looks nothing like what I saw on television. Not accepting the gift card for purchase, not giving Stars for purchase were always dissatisfiers for SBX fans. For me, SBX is awful coffee. Peet’s Coffee is much better!

A couple of licensed casino locations in my area have had this in place for quite some time. More recently a licensed hospital location in my area also brought this online. For it to work seamlessly you must order and redeem rewards through the app. These licensed casino locations are a problem. A 12 oz Black Tea runs $4.95. 12 oz Mocha runs $7.15. They are the most inefficient operation I’ve ever seen. Customizations are often not programmed into the register and there is confusion over how to price customizations. Paying one of these casino Starbucks in my area with a credit card for their $5 drink means showing ID or waiting for “the food and beverage supervisor to approve it” if you decline to show ID since they cannot require it per the card networks, but the cashier will be fired if seen over the camera accepting a credit card without ID, and then the casino point of sale takes 30 seconds to process the card then prints out 4 different receipts and once… Read more »
0
|
0
-   Share

Braintrust
"When your name is over the door or on the marquee the customer experience should be the same. It’s good to see Starbucks address this issue."

"Starbucks must determine the right strategies and operating model to serve both customer segments and the hybrid customer, who may be a mix of the two."

"This is good to hear. I always wondered why these locations were not able to do mobile orders."