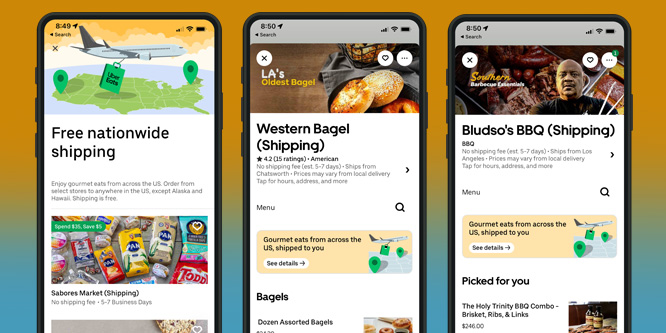 If you live far from your favorite restaurant in New York, Los Angeles, San Francisco or Miami that you lament not being able to order from, Uber Eats may have a solution for you. The delivery service launched a feature to let customers order nationwide from select partner restaurants in these cities.

The feature went live on the Uber Eats app earlier in June under an option to “Get far off cravings shipped,” according to Food & Wine. Uber Eats is kicking it off with 16 restaurants across the four cities, with plans to expand. The company has focused on themed restaurants with tourist appeal and little or no restaurant footprint outside of that city, such as Sarge’s Deli and Wafel & Dinges in NYC.

When customers order food, it is packaged by the restaurant and shipped via FedEx. Uber Eats touts shipping as free, though Food & Wine describes the base prices as generally not cheap.

According to Food & Wine, DoorDash launched something similar in November of 2021 and, before that, startup Goldbelly pioneered the concept, focusing exclusively on such restaurant partnerships.

Goldbelly launched in 2013, and became so well established that restaurateur Danny Meyer’s investment firm purchased a stake in the startup in 2018, according to Eater. Through Goldbelly, customers have proven willing to pay big bucks for regional favorites, like more than $100 for Russ & Daughters’ bagels.

Major delivery players like Uber Eats and DoorDash have been rolling more disparate delivery services into their apps as they compete to dominate in new categories.

For instance last year, Uber Eats partnered with Estée Lauder to make two of its sub-brand makeup lines available via the app. It also partnered with ultra-fast delivery service GoPuff to deliver home essentials such as OTC medicine, toothpaste and other CPG products.

DoorDash has gone as far as to open its own branded dark stores to sell convenience store products via app.

The company’s DashMart dark stores operate in 14 major U.S. cities as of 2022, according to Ridester.

DISCUSSION QUESTIONS: Does it make sense for Uber Eats to include a “get far off cravings shipped” feature as a part of its app and will its exclusive restaurant partners distinguish it from DoorDash and Goldbelly? How successful do you see this service being, and what factors will contribute to its success or failure?

Please practice The RetailWire Golden Rule when submitting your comments.
Braintrust
"The far-off cravings service doesn’t have to onboard millions of consumers in order to make sense. "

I understand the novelty of the idea, and for a very small percentage of people this might be something that they would do. However the cost is prohibitive, not to mention the profoundly terrible environmental impact of shipping a deli sandwich across the country by airplane.

It’s a nice service but it all seems a little over the top! How is that meal going to taste after having been shipped halfway across the country? What will the presentation look like? Maybe fine for basics like bagels, but for anything more complex I just don’t see the appeal. And the biggest question of all: with free shipping, is this anywhere near profitable?

The far-off cravings service doesn’t have to onboard millions of consumers in order to make sense. A subset of food fans will open their wallets and potentially become repeat customers for Uber Eats (and the far-off food purveyors). It’s all good!

If – and this is a big if – prices are even somewhat reasonable, this has some potential. As a transplanted New Yorker in Califonia, there are plenty of days when I am craving an authentic black and white cookie, and trust me, they just don’t do them right out here (Californians, don’t try to argue with me – I have tried them everywhere I see them here!). However how many times a year will people really indulge in these cravings? That’s for sure a function of price and quality of experience (e.g., speed, freshness, packing, etc.). Time will tell I suppose, but I am already online searching for my black and white cookies!

The “getting far off cravings shipped” Uber Eats business model may be a niche one at best. While people may crave and reminisce about their favorite NYC restaurants once they have migrated to the suburbs, the costs of this service and the execution side make this an unsustainable model.

This will not resonate with conscious consumers, who are now aware of their purchases’ environmental impacts and carbon footprints. There is no replacing the dining experience that goes along with our old favorite restaurants. By the time the food arrives, what is intended as a transporting experience may be far from that reality. Additionally, the costs associated with this service will make it unprofitable for Uber Eats and its restaurant partners.

While this expansion into other food deliveries may make more brand sense than Uber Eats’ recent foray into non-food deliveries, it has real strategic and tactical implications. The challenge is, how does this service reinforce the Uber Eats brand and how does it successfully deliver such products over a long distance? The meat and seafood companies, like Omaha and Kansas City Steaks and Wild Alaskan and Fulton Fish Market, focus primarily on the delivery of frozen product that travels well and transitions nicely onto the grill upon delivery. I’m not certain that the Uber Eats city meals shipped nationwide will have such acceptance.

Really? Packaged by the restaurant and shipped via FedEx? I hope they are trained well to preserve presentation Here’s my idea: you guys try it first, then let me know!

How will the meal taste by the time it arrives?

This is fun. And while it’s not a completely new concept, nationwide food delivery is definitely publicity-worthy. I see it as more of a PR move than a material revenue generator.

This is one of those “prove me wrong” moments: between getting what is essentially day old food — and likely paying enormously for it — and not having the actual restaurant experience, personally I can’t imagine having any interest in this.

Braintrust
"The far-off cravings service doesn’t have to onboard millions of consumers in order to make sense. "