Unionization efforts may shift gears in 2023 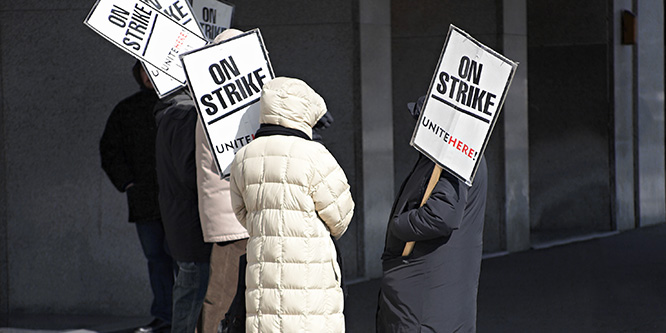 Shoppers planning to visit Macy’s Union Square flagship store in San Francisco for last-minute gifts on Christmas weekend were met with a picket line, as the store’s union went on strike for the two days before the holiday.

Better pay, increased staffing level and affordable health care are what the United Food and Commercial Workers Union was asking for, according to a local NBC report. The store had only given its employees a $1 per hour raise in three years, and did not budge on other substantive issues, the union claims.

The union argues that what the chain has offered is not commensurate with the added stress faced throughout the pandemic.

In other regions, workers at four Macy’s stores in Massachusetts and one in Rhode Island authorized a strike in May over a contract negotiation to bring minimum pay up to $15 an hour, after a pay raise was announced at non-union stores, according to The Providence Journal.

Led by younger workers, employees over the last year at Starbucks, Amazon, Trader Joe’s, Apple, REI and Chipotle have organized for the first time. Starbucks has been affected the most, with reportedly over 250 locations across the U.S. voting to unionize.

A Wall Street Journal article this week, however, found unionization efforts have slowed in part due to improving pay and benefits. An Amazon warehouse in Staten Island unionized in April but similar efforts by other distribution centers have stalled due to high turnover, comparatively better pay versus other warehouse jobs and efforts by Amazon, according to the report.

While the job market remains tight, recessionary conditions may cause unionization to proceed at a slower pace in 2023.

“Workers are running into the intransigence of the companies,” Charlotte Garden, a labor lawyer and professor at the University of Minnesota, told the WSJ. “The big question is if that will persist, or if something will change to make companies feel that unionization is the best scenario.”

DISCUSSION QUESTIONS: Do you see the recent labor activism taking another step forward or retreating in 2023? Have retailers learned the formula for countering or softening unionizing efforts at stores and warehouses?

Please practice The RetailWire Golden Rule when submitting your comments.
Braintrust
"If the companies can't take care of workers' needs, the workers need a strong voice. That voice is unionization."

"Unions have a tough row to hoe with the changing nature of work and worker mobility."

"Jeff Gennette, CEO of Macy’s, saw his pay increase 11 percent to $12.3 million. Employees got a $1 raise over the last three years. My reaction to this example is unprintable."

7 Comments on "Unionization efforts may shift gears in 2023"

Jeff Gennette, CEO of Macy’s, saw his pay increase 11 percent to $12.3 million. Employees got a $1 raise over the last three years. My reaction to this example is unprintable.

Companies who have learned the employees’ needs will mitigate union efforts. Companies who try to do “just enough” will be dealing with unions for a long time.

Union advocates scored a huge win in April when workers at the company’s largest warehouse on Staten Island, NY voted to form Amazon’s first union, but since then three efforts to unionize other facilities — one in Alabama and two more in New York — failed.

I think two factors are cooling the fires of unionization: 1) Workers were totally freaked by the risks they were taking on the job during the pandemic. That sense of urgency has subsided. 2) Amazon (and to a lesser degree, Starbucks) has learned a lot in the last year about undermining union efforts by offering just enough to make unionization seem less attractive. These companies have all the money and resources they need to work their strategies and manipulate worker sentiment. Unions simply can’t wield enough power these days.

The workers read the papers and target Starbucks and Amazon. Amazon and Starbucks do have resources to mitigate the organization of unions. The unions should target other retailers and QSRs who don’t generate headlines. If they do, and they should, play hard bargains.

Perhaps labor has finally realized how they have been used over the past three decades.

Great points, Rick! When we know better, we do better.

I don’t look at recent unionization efforts as worker rebellion so much as an understandable response to realities in our economic climate. Companies are being pushed by shareholders to continuously max up profits, resulting in staffing cuts and short cuts that make employees feel more like robots than customer ambassadors. Prices on every day necessities and health care continue to rise so even middle class families are having to make some hard choices, yet wages have not kept pace in decades.

Retail has always held the front lines of societal change. Where shoppers spend their money is one of the quickest and most powerful ways to move big issues forward. Retail’s actions on issues like sustainability, equality, even Covid protections have done more to advance these causes than anything governments around the world have as yet accomplished. It’s only logical that workers overwhelmed by economic stresses push back on the retailer, both as customers and as employees.

Unions have a tough row to hoe with the changing nature of work and worker mobility. Now instead of lifetime employment, if workers are unhappy, they just move. It is projected that a worker entering the workforce will have over 15 different jobs before they retire; that number could be higher if they start in retail or hospitality. Why go thru the pain of union organizing? If they are not happy, they move on.

I was staying at the Westin St. Francis on Union Square over the holiday with a birds-eye view of the Macy’s strikers and their giant inflatable rat! We saw lots of public support and depressed footfall inside the store. Perfect staging in front of all the celebrants at the Macy’s-sponsored giant tree and skating rink there in the square.

Braintrust
"If the companies can't take care of workers' needs, the workers need a strong voice. That voice is unionization."

"Unions have a tough row to hoe with the changing nature of work and worker mobility."

"Jeff Gennette, CEO of Macy’s, saw his pay increase 11 percent to $12.3 million. Employees got a $1 raise over the last three years. My reaction to this example is unprintable."