Walgreens tests tech that sort of recognizes you in-store 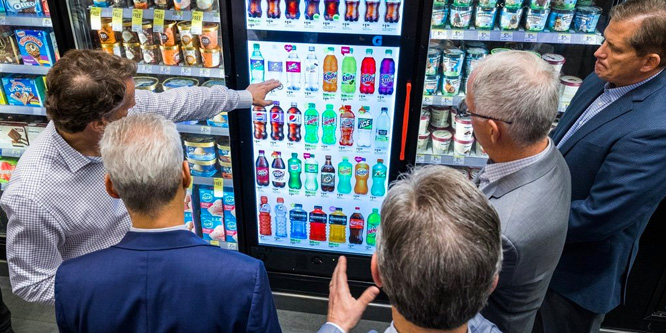 Walgreens is piloting a line of “smart coolers” with the ability to display targeted ads to in-store shoppers.

Instead of seeing through the glass to drinks, ice cream and other items, shoppers view digitized representations of available products inside, or basically a planogram on the front of refrigerator and freezer doors.

The system involves using sensors that detect shoppers and cameras that scan their faces to estimate their gender and approximate age for delivering targeted messages. Weather, time of day and other events may also influence messaging.

Beyond messaging, iris-tracking technology can show which items are picked up or are looked at, providing insights into the effectiveness on-screen promotions and the overall display.

The digital screens on the coolers further give retailers the ability to make real-time changes to pricing and promotions. Alerts to out of stocks is touted as another benefit.

According to The Wall Street Journal, about 15 brands, including Nestle and MillerCoors, are also testing the technology from the start-up, Cooler Screens. Microsoft was involved in Cooler Screens’ latest funding round and provides software that powers the technology.

Facial recognition software in retail is becoming more common in Asia to support mobile payments. But some see facial scanning as an invasion of privacy that doesn’t ask for consent from the consumer.

Last year, a firestorm erupted after two Canadian malls were discovered using cameras to track shoppers. Similar to Walgreens, the technology only made inferences on ages and gender. The mall operator felt it didn’t have to notify customers or obtain their consent because no photos or videos were recorded. The pilot ended after a major backlash.

Walgreens is posting privacy statements near the coolers and a concierge will be available in test stores to explain the technology.

According to The Atlantic, Cooler Screens claims its technology isn’t facial recognition because it doesn’t identify individuals and only scans faces to gain inferences of their make-up. Only anonymous metadata is captured and stored.

DISCUSSION QUESTIONS: How do you expect customers in Walgreens to respond to the Cooler Screens technology? Does Walgreens have an obligation to explain how the technology works to shoppers in its stores?

Please practice The RetailWire Golden Rule when submitting your comments.
Braintrust
"I just want to buy a bottle of soda, now I have to deal with technology watching me do it? Seems like overkill to me."

"This is yet another example of a tactical implementation in desperate search of a strategy."

"If there’s this kind of budget, what if Walgreens were to rethink the cooler experience altogether?"

I think they’ll respond coolly. I’m not seeing the shopper benefit and any benefit to Walgreens looks like it will come at a high price.

Customer reaction will vary from “cool” to “creepy.” The use of facial recognition will continue to move forward, regardless of the privacy concerns since there is a lack of regulations to ensure this data is not misused. But as much as I am concerned about the potential misuse of facial recognition, it feels like a Pandora’s Box that has already been pried opened – I think it’s unstoppable, the same way it seems to be impossible to regulate privacy concerns and tracking online. I feel that Walgreens has an obligation to explain how its technology works, but there’s a downside to explaining – it draws unwanted attention that could create more negative press than saying nothing at all. Facial recognition is a very slippery slope — that we’re already on.

First, I love innovation in retail. But on this attempt I expect an epic fail. Shoppers are not looking for more intrusive interruptions to a seamless shopping experience. And the shopper looking at the cooler in a drug store is probably a frequent customer, primarily using the store as the nearest “convenience option” for their purchases. I don’t think many Walgreens shoppers are going to be looking for help navigating the cooler. If the display offers immediate promotional pricing or some other offer that might help. But I can read the “Buy 2 for $5.00” signs in the current coolers just fine — even at my age.

This is another step in the drive to make every shopping experience a 1:1 experience. Initially, I see some wariness and as with most tech-enabled experiences, the younger the shopper, the more open they’ll be. However, as these innovations continue to roll out, the comfort with them will grow. It wasn’t long ago that experts were saying shoppers wouldn’t share their location to receive localized offers. Now it’s commonplace (especially with Millennials/Gen Z). At launch, Walgreens should absolutely make efforts to explain the technology, as that will lessen the degree of wariness sooner.

This idea is reflective of the tech-dominated rush to personalization that is happening in retail. Instead of seeing personalization as connecting to customers in a personal way, retailers are chasing after pure tech solutions that are built based on the capabilities of the technology and are then tested to see how customers will respond. Sounds like a backwards approach to me!

Success or failure of this technology will depend on how the screens are used to promote the products inside the cooler. If, as shown in the video, all they do is show an image of what’s inside with a small advertisement or teaser of a “special” I don’t see how this helps the consumer or Walgreens. How is this better than just walking up to the cooler and looking through the glass to see what’s inside? This really requires creativity on the part of Walgreens and the participating brands to generate interesting content for the screens that’s relevant to the consumer. It needs to be treated like any digital signage would be throughout the store. Otherwise, this is technology for the sake of technology and will just get in the way of the sale.

This pushes the envelope of “cool.” It will appear unnatural to the customer. Not a long-term offering in this form.

The key question posed by RetailWire is whether Walgreens has an obligation to explain the technology behind the coolers. I assume that camera lenses aren’t conspicuously trained on customers so does Walgreens have an obligation to explain that cameras are in fact there? Doing so would seem to be an epic fail. Who would think of that as a comforting, helpful in-store technology? Helping Walgreens manage out-of-stocks? Oh, yeah! Sign me up! (Not).

So, is the standard that, if a customer knew a certain activity was happening and would balk at the prospect, the technology shouldn’t be used? This is often the implied standard anytime Facebook or other data-mining platforms are discussed. The answer in the U.S. has been “What you don’t know can’t hurt you” but it’s starting to wear thin.

I just want to buy a bottle of soda, now I have to deal with technology watching me do it? Seems like overkill to me.

This initiative is not new and I suspect it will fade away. It probably wouldn’t have been deployed at all without Microsoft’s funding. There is no benefit to the shopper. This is yet another example of a tactical implementation in desperate search of a strategy. It’s another method for Walgreens to extract funding from their CPG vendors. There is no apparent sustainable and measurable validation to the benefits to the shopper and/or brand vendors that will be asked to fund this initiative.

What a dreadful idea. Serving up stereotypical ads based on appearance is a terrible idea and off-putting at best. It’s certainly not personalization.

No, no, no! Please. all I want to do is see the can of Coke and grab it and go. This adds nothing to customer convenience.

I don’t know if this really improves the shopping experience for customers… It’s very cool looking and I imagine has a wow factor when you see it in person, but it looks expensive compared to the ROI over time. This essentially digitizes an existing process (a slightly better version of something we already have). If there’s this kind of budget, what if Walgreens were to rethink the cooler experience altogether?

Technology for the sake of technology from a retailer that still doesn’t get the basics right! And who actually wants this? Color me skeptical!

A couple of discussion points here. First, people seem to confuse facial recognition with Anonymous Video Analytics (AVA). The former recognizes and identifies people, the latter recognizes gender, age range, dwell time, etc. without saving images. AVA’s primary value has proven to be gathering good analytics and measurements which help justify ad rates. Whether ads triggered by real time AVA insights perform better or not is still a matter of debate, and generally not the reason cameras are considered today.

Second, the LCD screens used by Cooler Screens obscure the view of what is in the cooler, especially when an ad is running instead of the planogram images. Translucent LCD technology allows ads to run while still providing a view of what lies within.

This is just the latest example of Technology Gone Wild in mass market stores. Shoppers will not appreciate this invasion of privacy, especially if it is explained to them. Peek-a-boo! I see you!

My expectation is customer reactions will fall into two groups based on age. The younger customers will think this cool tech and everyone else will have reservations about the use of any facial recognition. If you have to explain what the tech isn’t doing to your customers, then you shouldn’t be using the technology.

Doesn’t help the shopper much, but it can help the retailer, especially in avoiding poor quality displays, out-of-stocks for certain products and damaged packaging on items. It also reduces the time needed to update/manage the coolers by staff members in the store.

Identifying the customer is an add-on to capture personalization at the same time, but the risks here will result into this just devolving to standard digital signage. Still not sure how valuable that will be — even with high quality screens. Customers still like to see the product.

About 3-4 years ago, Software AG demonstrated this technology at a number of customer events. It always attained great interest from attendees but in terms of using it in the real world, there were always concerns around “creepiness.” Despite the fact the system only recorded age, sex and length of time looking towards the camera (dwell time), there was concern that irrespective of what and how customers were told they would worry that their images were being stored for future use.

Privacy concerns have not gone away — and putting privacy statements on the coolers makes sense — however the key is whether or not consumers trust these statements. After recent media coverage regarding use of private data by social media companies, it could be that consumers do not always believe such statements.

Braintrust
"I just want to buy a bottle of soda, now I have to deal with technology watching me do it? Seems like overkill to me."

"This is yet another example of a tactical implementation in desperate search of a strategy."

"If there’s this kind of budget, what if Walgreens were to rethink the cooler experience altogether?"