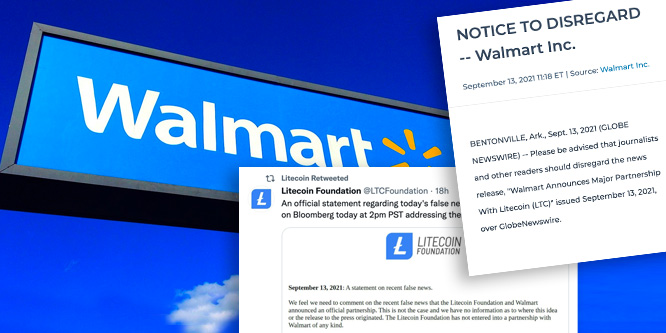 Walmart yesterday found itself having to issue a statement calling a press release sent out by Globe Newswire a fake. The false press release claimed that Walmart would begin accept litecoin cryptocurrency payments for online orders.

The fake announcement appeared to be authentic, complete with made-up quotes from Walmart CEO Doug McMillion. It also came on the heels of the retailer posting a “Help Wanted” ad for a cryptocurrency expert, according to CNN.

CNBC reports that several legitimate news organizations, including its own, went live with the story.

Shares of litecoin, the nineteenth most valued cryptocurrency, according to MarketWatch, jumped following the phony announcement but quickly came back down after Walmart refuted it and Globe Newswire recalled the release. Walmart’s stock price did not appear to have been significantly affected by the non-news.

Globe Newswire, owned by Intrado, said the release was issued through a “fraudulent user account” and that it was taking steps to improve its authentication methods going forward.

Litecoin creator Charlie Lee said that his organization, Litecoin Foundation, had nothing to do with the apparent “pump and dump” scheme connected to the false press release.

He told The Wall Street Journal that even litecoin’s social media manager was fooled by the fake news, going so far as to retweet it on the corporate Twitter account. “He thought it was real, too,” he said. “It was wrong to retweet it. We deleted it quickly afterwards. But the damage is done.”

DISCUSSION QUESTIONS: Do you see fake news and misinformation spread through social media becoming a greater threat to retail businesses? Where do you expect retailers to be when it comes to cryptocurrency over the next five years?

Please practice The RetailWire Golden Rule when submitting your comments.
Braintrust
"The Walmart crypto fake press release should prompt all retailers to make sure they have a process in place to quickly respond to fake news or misinformation. "

"This is a serious issue, but is less about retail and more about securities fraud."

"Perhaps this brings about a new desirable skill set — finding people you can hire who are adept at spotting and dismantling this type of fakery?"

12 Comments on "Walmart says crypto press release is a fake"

Fake news and misinformation are not new, however the ability to spread misinformation has never been easier to do. All companies need to be watchful for misinformation that can cause damage to their brands and confusion with customers/stakeholders. And while this is hardly a retail issue, retailers are as susceptible to this as any business. Cryptocurrency is gaining momentum and El Salvador recently announced that it’s accepting Bitcoin as currency. It’s only a matter of time before crypto becomes a mainstream payment option and all retailers need to be prepared to accept it at some point in the future.

The Walmart crypto fake press release should prompt all retailers to make sure they have a process in place to quickly respond to fake news or misinformation. Those issues aren’t going away, and it is easier than ever for them to spread. Part of what made this example effective is that cryptocurrencies are gaining traction, so it is not too much of a stretch to imagine that retailers – especially those striving to be at the forefront of change – will venture into accepting them. Mainstream customers may not yet be comfortable with understanding cryptocurrencies or how to transact with them, so any retailers that do accept them likely won’t see serious use of that payment method for a while. Even digital wallets are still under-utilized and the average consumer understands those much better than crypto.

Question: is there a compelling reason for retailers to accept cryptocurrency?

It’s a good thing that schools are starting to teach classes on how to spot fake news, because this unfortunate trend is here to stay. Perhaps this brings about a new desirable skill set — finding people you can hire who are adept at spotting and dismantling this type of fakery?

I agree. I think we should call them “journalists.” Thoughts?

Fake news and misinformation are a threat to every industry – retail isn’t the only one. Crypto has peaked many consumers’ interest, but think about how long it’s taken for shoppers to be comfortable using Apple Wallet in stores. This will take time as well.

Retailers should aggressively prosecute those that co-opt their brand like this. This is criminal market manipulation, causing a $3 billion increase and drop in the market cap of Litecoin. News outlets like CNBC and Yahoo should be ashamed they didn’t check their stories before publishing in the fast-pace world where being first is better than being right. With Crypto being ripe for fraudulent schemes like this because of its decentralization, everyone needs to be more careful. Maybe there is a value to trust in markets…

I’m sure many will disagree, but I would put this under the “prank” category: while it probably wasn’t (literally) costless, there would seem to be little possibility of someone actually using this info — the website obviously isn’t set up to handle crypto transactions — so damage is minimal. And frankly, the claim seemed far-fetched enough — Mr. Lee notwithstanding — that it would give most people pause.

Far more damage is done thru low grade, plausible falsehoods spread either maliciously or just thru bad-old-fashioned stupidity, than April Fools-like efforts such as this.

It caused a $3,000,000,000 change in Litecoin market cap. Didn’t hurt Walmart as much as consumers and markets, and especially press that have egg on their face.

Yes, you’re correct, although I was thinking of Walmart when I wrote that, since they’re the (primary) subject of the post.

How we should deal with markets that regularly trade on speculation and rumor — true or not — is perhaps best left for another day … or forum?

This is a serious issue, but is less about retail and more about securities fraud. The appropriate place for this kind of engagement would be with the SEC. The “pump and dump scheme” may have cost investors millions and automated investing tools could easily mistake the initiative. I’m most surprised organizations like Globe Newswire would have released this without officially confirming the information. Walmart’s quick response probably saved investors (especially smaller ones) millions. The problem is classification of cryptocurrencies as securities that are traded openly on the market — and these typically have less formal guidelines than stocks or FX. An SEC statement from a couple of years back identified this kind of fraud.

Retailers may adopt some form of crypto payments in a few years, but right now there just hasn’t been enough of a mess market. For higher priced currencies, it’s unlikely these would be considered until the price value is closer to real dollars and cents with wide adoption.

Misinformation and fake news are, unfortunately, nothing new. The advent of social media has changed the dynamics as to how quickly a false news posting could go viral and cause chaos and disruption. The viral post is also likely to lead to a call for greater regulation of the cryptocurrency industry, which accounts for billions of dollars of trading on largely unregulated markets, where a bit of misinformation where pump-and-dump schemes occur often.

The key to mitigating this is a targeted social media approach to correct and retract any misinformation. Walmart and the Global Newswire acted quickly to withdraw the illegitimate press release.

Braintrust
"The Walmart crypto fake press release should prompt all retailers to make sure they have a process in place to quickly respond to fake news or misinformation. "

"This is a serious issue, but is less about retail and more about securities fraud."

"Perhaps this brings about a new desirable skill set — finding people you can hire who are adept at spotting and dismantling this type of fakery?"