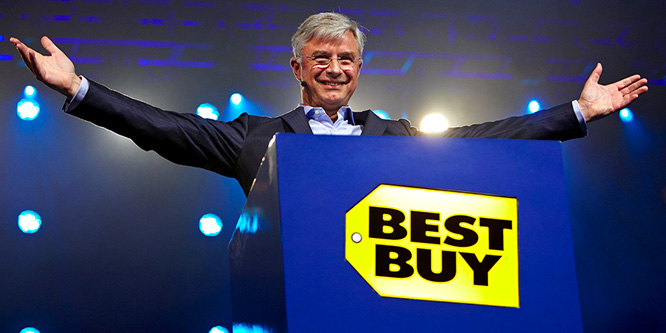 Judged by their employees, the top three CEOs in the retail industry are Charles Butt of H-E-B, Hubert Joly of Best Buy and Craig Jelinek of Costco, according to Glassdoor’s Top CEOs for 2019.

The Glassdoor Employees’ Choice Awards are based on the input of employees who voluntarily provide anonymous feedback by completing a company review about their CEO’s leadership, along with insights into their job, work environment and employer over the past year.

Mr. Butt ranked number two on the top-100 list among larger companies (1,000 or more employees) with an approval rating of 99 percent.

According to reviews from current and former employers over the last year, H-E-B stands out for its above-average pay, flexible schedules, benefits, friendly co-workers and managers, and community support. Wrote an anonymous employee in a review on July 9, “Great culture. Supportive of work life balance. Expects high performance but provides the resources to be successful.”

In reviews, Best Buy also earned call outs for its pay, flexible scheduling and benefits as well as its employee discount, advancement opportunities and fun working environment. Wrote a former sales associate on July 10, “It really felt like the sales team was a family and they were very understanding and flexible with hours.”

According to Glassdoor, top CEOs have four traits in common:

DISCUSSION QUESTIONS: What makes a strong retail leader? Are there certain leadership traits that are more important for a retail CEO than top executives in other industries?

Please practice The RetailWire Golden Rule when submitting your comments.
Braintrust
"I think a lot of this comes down to fairness. People like to be treated fairly and admire leaders who inject that ethos into an organization."

"I see two top traits for a retail CEO – the first is culture. Good corporate culture starts at the top..."

"Having a CEO that exemplifies what the company stands for and puts themselves on the line for significant positive change is key to culture."

Humility and demanding/fostering teamwork. Actually practicing the skill of listening and learning. There have always been a lot of moving parts in retail, but now most of those parts are in a state of flux and change — evolution. And those moving parts still have to mesh. It’s not enough to be a great merchant prince anymore. Too much uncharted territory out there. The boss has to demand a level of humility from the whole team that keeps them in a learning mode. Explore + Experiment = Experience.

Well said, Jeff! The “merchant prince(ss)” was all about charismatically marshaling the company around a vision that established (eventually mainstreamed) real connections between styles and lifestyle trends. They didn’t necessarily have to excel on other core leadership traits, their flare and charisma carried the day and everyone around them jumped through hoops to make things work. In today’s dynamic consumer environment combined with massive advances in technology and rising employee expectations, it’s now even more difficult to make this model work. It’s well past the time of walking away from retail exceptionalism and should be demanding a higher level of professionalism, trust, and leadership in the CEO and her C-suite; the board of directors is a great place to start but that also needs a serious redo. Given retail’s prominence in the economy, we should have many more retail CEOs in the top 100. In an HBR annual report on the top 100 performing CEOs around the globe, retail garners seven spots – which grows to 15 by including CPG companies. While company performance is… Read more »
9
|
0
-   Share

The four traits cited by Glassdoor apply equally to retail CEOs as well as other successful CEOs. I would add a couple that may be unique to retailing, but represent two sides of a CEO’s skill set:

The majority of retail employees are in front of customers, so it’s really important for CEOs to foster a culture that enforces their unique brand promise so every interaction between those employees and their customers is a positive experience. That’s what sets many of the top companies apart from those that have a short lifespan.

I think a lot of this comes down to fairness. People like to be treated fairly and admire leaders who inject that ethos into an organization. Inspiration is also important: leaders must have a clear vision for the company and be able to communicate that clearly – and that means listening as well as talking!

I see two top traits for a retail CEO – the first is culture. Good corporate culture starts at the top, as the Glassdoor data suggests. For a retailer, this means exemplifying a culture around treating employees well to encourage delivering a great service and experience to customers. Second, a vision for change and strength to execute that vision. As we’ve seen repeated over and over in recent years, retail is an industry of constant change now, no longer can CEOs accept what has gone before as the way forward. CEOs need the strength to execute that constant level of change to make their brand better and better in the eyes of their customer – it’s the only way to be customer-driven and customer-first in the Amazon era!

What’s not to agree with in the comments made and to be made. There is one huge criterion that makes a great leader: when they can show everyone the scars on their fingers from putting store fixtures together in their past and doing literally every job a retail environment requires, then you have a leader that understands just what it takes and who has empathy.

I will never forget the best retail lesson I learned from a boss: I was being transferred out of a department store to another, and asked my present boss if he would give me any advice as I was leaving. He looked up from his desk and said, “the ladies bathroom on three is out of toilet paper. Go take care of it.” At first I was upset, but then realized that the lesson he imparted was that I must constantly be aware of everything that was going on.

The selection process for retail leaders should begin with test methods designed to actually observe candidates in a work in progress. This approach will encounter many intangibles that are too often left to a subjective interpretation of the needed values. Final candidates should be offered the same fortune and risk the company is signing on to. Performance-based compensation will demonstrate the candidates’ confidence in the company which is all too often misinterpreted.

I agree that first and foremost the retail employees need to be happy as they interact directly with customers every day and are the face of the company. But beyond culture, the CEO must also be strategic – almost a visionary. Joly at Best Buy was great at rallying the retail troops, but he also recognized major growth opportunities such as the smart home, particularly the Assured Living program which uses technology to help seniors live longer in their homes. Technologies that require deeper sales interaction give Best Buy a competitive edge over online competitors.

The attributes of great retail leaders can be applied to all industries and all good leaders, however some of them are particularly important in the retail environment. Great communicators, positive culture creators and nurturers of other great leaders would be applicable everywhere. The strength of flexible working practices, teamwork – especially of the sales team – and understanding of marketing dynamics are particularly important in a retail environment. Staff in retail are so often undervalued. They are expected to transition and move on frequently with little loyalty. This can make the retail operations very expensive and ineffective as the company is constantly having to train new staff and build the culture they want in their business. If staff are well looked after from the start, you can make a difference and break the cycle of retail staff constantly moving on. Yes, you will always get the students and holiday cover staff who are transitory, but the core staff can be retained which really delivers benefits for the company. So why do so many retail CEOs… Read more »
0
|
0
-   Share

Strong CEOs tend to exhibit similar traits across industries. That is probably why Lou Gerstner was successful in senior leadership positions at RJR Nabisco, American Express, McKinsey & Company and IBM. Very diverse businesses to say the least. However, I do agree with Dick Seesel and others that retail has some special characteristics that make it important for leaders to acknowledge in order to drive great results in our industry.

For any leader — including retail leaders — I believe advice from my mentor and father applies: “Always lead by first putting yourself in the shoes of those affected by your decisions.” There are some that may argue that this approach is over-rated. For me, remaining humble, empathetic, and aware can never be bad advice.

When I think of successful leaders, the recently-departed Herb Kelleher of Southwest Airlines comes to mind. He would help baggage handlers load planes and interacted and remained accessible to all levels within the company … this led to passion, success, and unparalleled growth in market share.

Having a CEO that exemplifies what the company stands for and puts themselves on the line for significant positive change is key to culture. And culture is the key to everything (what it’s like to work there, why everyone is there and what new ideas come up/are embraced, etc). Supporting those same traits amongst the team is a success recipe that transcends any strategy, technology or trend.

Leadership is quite broad, and there are many ways to lead. Retail leaders are more beholden to the customer than other industries. Most retail employees are customer facing. Hence, retail leaders must be able to lead employees with that factor in mind. Other than that, there is a wide diversity across retail leader traits that exceed far more than the narrowed viewpoint shared by GlassDoor.

Braintrust
"I think a lot of this comes down to fairness. People like to be treated fairly and admire leaders who inject that ethos into an organization."

"I see two top traits for a retail CEO – the first is culture. Good corporate culture starts at the top..."

"Having a CEO that exemplifies what the company stands for and puts themselves on the line for significant positive change is key to culture."