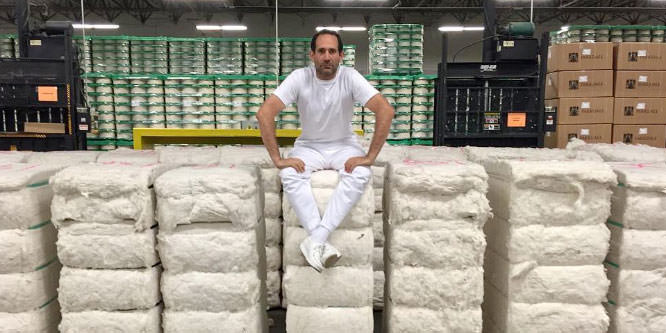 American Apparel is headed back to bankruptcy court for the second time in a year. The future of the embattled fashion brand/retailer is uncertain, if not downright bleak.

The company has begun to close up shop outside of the U.S., shuttering 83 stores located in Australia, Canada, Germany, Ireland, Japan, Spain and the U.K. A three-month search to find a buyer for the business has turned up only one bid from Gildan Activewear out of Canada.

The $66 million offer made by Gildan is for American Apparel’s intellectual property and some of its wholesale inventory, along with options on its manufacturing and distribution. The deal, if approved in its current form, would likely mean the dissolution of American Apparel since it currently has debts totaling $215 million. The company continues to look for a buyer that will keep its retail stores operating.

As might be expected, founder and former CEO Dov Charney, believes the problems American Apparel is facing are due to the company’s board deciding to relieve him of his duties in 2014.

“The lesson is there has to be some respect for entrepreneurship and management,” Mr. Charney told Bloomberg. “They didn’t respect my management team and creative team. We built an extraordinary business.”

American Apparel, which lost $270 million between 2010 and 2014 and saw its share price fall below $1 at one point while Mr. Charney was in charge, continued to struggle after his departure. The company’s revenue fell $497 million in 2015 and has fallen by a third year-over-year since it emerged from Chapter 11 protection in February.

Mr. Charney, who has disputed allegations made against him, was accused of various acts of misconduct in his role of chief executive at American Apparel. Over the years, press reports about Mr. Charney have contained stories alleging sexual harassment, misuse of company funds and, on at least once occasion, dancing around the company’s office in his underwear.

DISCUSSION QUESTIONS: Who do you think is to blame for American Apparel’s fall over the years? Do you see a scenario in which American Apparel will continue to exist as a retail entity? Is an American Apparel-like model viable in the current retailing environment?

Please practice The RetailWire Golden Rule when submitting your comments.
Braintrust
"As a Millennial who was in American Apparel’s target demographic, I’d say it’s more the brand’s reputation than the pricing."

"While it’s tempting to lay the blame at [Dov Charney's] feet, it’s more likely that prices are to blame. $50 sweatpants? Why?"

"Consumers don’t have time to stay apprised of brand management. Instead, they write a company off when it gets bad press..."

10 Comments on "Who destroyed American Apparel?"

The drumbeat of bad publicity about Mr. Charney has been with us for years. From allegations of sexual abuse to posing mannequins with pubic hair (!), Mr. Charney has been the face of a company struggling to position itself in the mainstream. That said, while it’s tempting to lay the blame at his feet, it’s more likely that prices are to blame. $50 sweatpants? Why?

I agree, Cathy, about Dov’s behavior. As a Millennial who was in American Apparel’s target demographic, I’d say it’s more the brand’s reputation than the pricing. I’d only spend $50 for a pair of sweatpants if a portion of the profits were going to a good cause and it was a brand I’d feel good about buying. Does this make sense? I’d pay $50 for a pair of Tom’s, but never for American Apparel merchandise. When a CEO is outed for poor behavior we write the brand off. No contest.

Dov Charney himself destroyed American Apparel. Consumers don’t have time to stay apprised of brand management. Instead they write a company off when it gets bad press and unless the company bounces back with sweeping, overarching philanthropy it isn’t easy to bounce back.

American Apparel marketed to a Millennial demographic of conscious consumers. Hence the brand’s initial success marketing American-made clothing. This type of consumer will readily boycott a brand that goes against their ethics and, let’s be honest, Urban Outfitters has a better selection at a lower price — without the guilt.

If American Apparel wants to stay on the map they need either a total re-brand, or a hip subsidiary (think J.Crew’s Madewell). And there’s definitely no place for pseudo-sex offenders in the re-brand.

This is another classic case of a solid 20 to 30 store idea blowing up to proportions that are unsustainable. It’s just not that great of an idea. Period. Especially considering the competitive set. If Charney would’ve kept it close to the vest, he’d be more than over-the-top (and living high on the hog) now by having key physical shops and selling online, all the while manufacturing in the U.S. and maintaining brand integrity.

But no. We call what happened with American Apparel being “drunk on profits.” Where those first few years look so good that you get intoxicated with the notion that you can blow your medium-sized idea up to be “bigger than Gap.” And make no mistake, Dov wasn’t the only one drunk on profits. There’s a lot of culpability to go around. But in the end, again, it’s just not that good or differentiated of an idea.

As valuation tops the hierarchy of business needs atop brand equity, a defensible competitive position and other tactical factors, American Apparel is the perfect example of an enterprise that looks like Swiss cheese (some substance but lots of holes). Gildan will benefit from the substance.

Let’s agree that both pricing and Dov are two of the major culprits. But when they called for life support we, the customers, said no we have had enough.

No one is to blame, as it was never really a viable idea to begin with; or more precisely, if it ever was viable in its early days it ceased to be so as market conditions changed.

A better question might be why it was allowed to go on as long as it did.

Pricing team, creative, fashion, etc., all divisions are responsible for the unfortunate outcome. If we were to attribute the failure to one reason — it would be organization culture and agility.

American Apparel was out of touch with their target demographic from the get-go. Their products seem unreasonably expensive to most consumers, especially when considering the cut and quality of the product. Millennials are completely onboard with supporting made in the USA products, and even paying a higher price. However, we need to either see where our money is going or feel like we’re getting a superior product. In this case, it seems like we are paying double for an item we could get anywhere else for half the price. If there were more transparency with where the extra money was going or the positive impact the company had in the Los Angeles community, maybe they would have gotten off on a different foot. However, as several other people mentioned any chance American Apparel had was lost by Dov’s actions. Sadly, I don’t see any future for this brand as it is. They would need a complete overhaul including a new rebranding effort and pricing strategy.

Braintrust
"As a Millennial who was in American Apparel’s target demographic, I’d say it’s more the brand’s reputation than the pricing."

"While it’s tempting to lay the blame at [Dov Charney's] feet, it’s more likely that prices are to blame. $50 sweatpants? Why?"

"Consumers don’t have time to stay apprised of brand management. Instead, they write a company off when it gets bad press..."