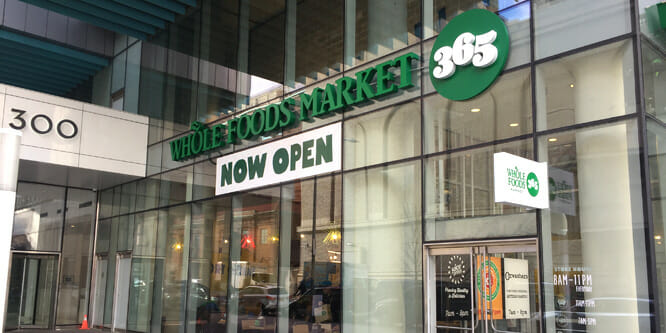 Whole Foods Market 365 — its parent company’s answer to Trader Joe’s — hasn’t gotten a ton of press lately, but plans are in place for the organic grocer to continue rolling out more of its new concept stores.

The smaller store format, which focuses on Whole Foods’ private label and markets itself as more price competitive than, say, its parent company’s full-line locations, opened in Brooklyn, NY, this week. The new space is the chain’s first on the East Coast — seventh overall — with 16 others planned around the country, according to the 365 site. 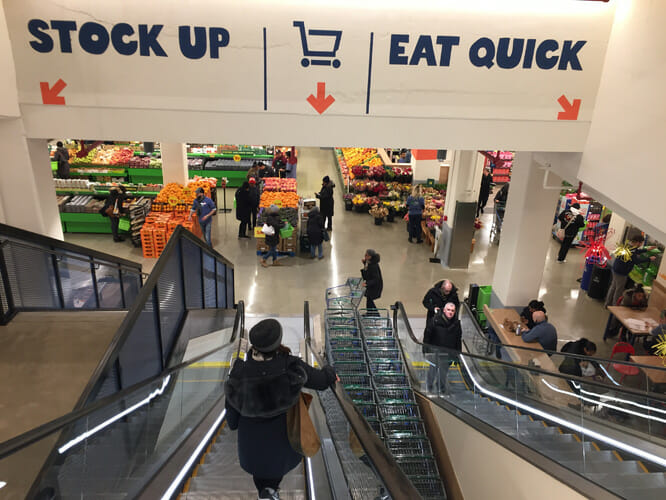 The Brooklyn store is located next to an Apple store and represents the second generation of the concept. Jeff Turnas, who leads the 365 business, told Bloomberg that the company is happy with the store layout and is focusing more on nailing product selection in each location. Among the changes made has been the addition of more bakery items and a butcher in each store. Operating costs may be slightly higher as a result of the changes, but the returns based on increased service levels have warranted the investment.

While Whole Foods has chosen standalone locations for its 365 stores, speculation remains that the concept may move inside some Kohl’s locations as the relationship between that chain and Amazon.com deepens. Amazon opened 10 shops of its own products inside Kohl’s in Chicago and Los Angeles in time for Christmas. Eighty-two Kohl’s stores in the same markets also began a test accepting product returns for Amazon. 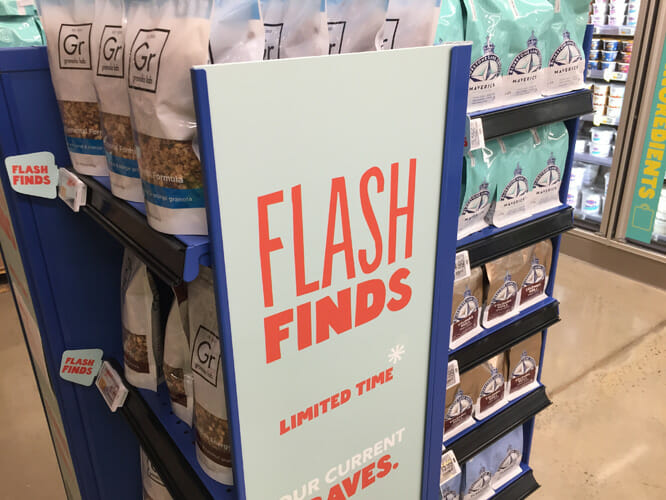 Last month, Kevin Mansell, CEO of Kohl’s, said the department store retailer is looking for partners from the convenience and grocery channels to fill open space in about 300 stores it has “right-sized” over the past several years. In addition to lease payments for the space, Kohl’s believes its business will benefit from the traffic that comes with having a grocery store inside the available locations.

It’s positioned a block away from Atlantic Terminal, a major transit hub served by multiple subway lines and the Long…

Posted by RetailWire on Friday, February 2, 2018

DISCUSSION QUESTIONS: What changes do you expect in future generations of the Whole Foods Market 365 concept? How will 365 affect sales at mainline Whole Foods stores? Do you think it makes sense for the chain to move into Kohl’s?

Please practice The RetailWire Golden Rule when submitting your comments.
Braintrust
"Dropping a grocery department in the middle of a mass merchant is not as simple as it seems."

"Co-location is definitely the way to go. It’s happening a lot in the U.K. right now..."

"I don’t think we need another grocery chain competing for a continually smaller piece of the pie."

I don’t think we need another grocery chain competing for a continually smaller piece of the pie. If Whole Foods planned to eliminate their main brand in favor of their new 365 stores, then I would agree. But shouldn’t Whole Foods concentrate on making their main brand as successful as possible before investing in another concept? Since Amazon took over Whole Foods, we have read about many issues taking place like items being out of stock, which does not make the customer happy. Focus on what you have and make it the best it can before tackling something new.

However I do like the idea of a partnership with Kohl’s, whether it be a hybrid of Whole Foods’ main brand or their new 365 concept. Now we’re acting smart — what does Kohl’s know about food? Not much. So bringing in a partner that is already in the food business is smart and makes keen business sense.

Amazon + 365 + Go is a recipe for store reinvention. The amazing thing about Amazon’s innovation curve is that it is both iterative and cumulative. The first Go store is not the final format for Amazon convenience. Nor is the expansion of the 365 concept the final iteration of Whole Foods for urban environments.

Rest assured that Amazon’s deep capacity to learn by testing will rapidly evolve to a number of hybrid formats that are the epitome of customer-centricity. A 365 store opening next to Apple, that can fit in a Kohl’s, should be striking fear in the board room of every retailer.

I’m with Chris. Amazon’s ability to test, learn and iterate will no doubt roll into new concepts through Whole Foods. Look for them to continually combine technology with new formats and I bet they’ll find several winners.

Shopper experience has to be central to strategy. Do smaller stores make sense? Absolutely. Co-location? Absolutely. New locations and footprints? Absolutely. The guiding question must be, “what satisfies consumer needs?”

In essence, 365 is a response to the fact that the mainstream Whole Foods proposition has problems. Rather than solve those problems, the company elected to develop a new format.

To be fair, a multi-format approach makes some sense when targeting a range of customer segments, or when covering locations with different needs. However, the first iterations of 365 were not particularly impressive, nor did they show much forward thinking.

I expect Amazon will shake things up a little, and may even look to blend the best of their own Go format with the good points of 365.

I’m interested to see whether 365 stores cannibalize existing full-line stores, especially as Amazon pushes Whole Foods prices downward to be more competitive. And I’m also curious to see how the tech advances being tested in Amazon Go are applied to a 365 store. (Yes, Amazon has said that it doesn’t plan to apply the cashier-less model to full-service Whole Foods stores.) Meanwhile, the tie-up with Kohl’s is intriguing. For those needing a history lesson, Kohl’s began as a grocery chain decades ago, and the department stores were started in 1962 as a side-by-side concept rather than “under one roof.” (I worked for Kohl’s from 1982 to 2006.) Eventually the two divisions were separated, the food stores sold to A&P and closed a while ago. Kohl’s has “right-sized” several stores and probably has 20,000 square feet to spare in these stores — but the locations with extra space may not be the most desirable locations to begin with and (as Target learned) dropping a grocery department in the middle of a mass merchant is not… Read more »
2
|
0
-   Share

Co-location is definitely the way to go. It’s happening a lot in the U.K. right now with supermarket chain Sainsbury’s acquiring homeware retailer Habitat and opening concessions in their grocery stores. But then supermarkets have been selling clothes and homewares for years, so it’s not that big a surprise. And it works both ways round. Marks & Spencer has been doing it for years. Many of their outlets have small Simply Food branches inside their stores — you just walk from browsing clothes straight into buying your groceries. Both sides of the business benefit, and we’re going to be seeing different brands partnering much more frequently from now on.

Marks & Spencer has been selling food alongside non-food since 1931! It is now a significant proportion of the business and is, in growth terms, far more successful than their lackluster clothing division.

Although it’s a slightly different proposition, Marks & Spender trounces Whole Foods in terms of quality, taste, food innovation and many other factors. So does UK chain, Waitrose. In fact, I honestly don’t think Whole Foods is all that great. It’s very overhyped in my opinion! Wegmans on the other hand, now there’s a supermarket….

Why draw the line at food? Perhaps add a little hardware, maybe some name-brand tools and, for those really oversized stores, a few of those must-have washing machines? At what point does a department store trying to be a shopping mall fail at both?

Future generations of the Whole Foods Market 365 concept will include private label expansion, tech and possibly partnerships. The 365 private brand hits so many trends that Millennials care about, including: Organic, natural, sustainable, local, corporate social responsibility, artisan and culinary products to appeal to younger shoppers’ health and wellness lifestyle. Amazon has invested in private label groceries and apparel, proving it’s a strategic priority. Line extension and expansion to the 365 brand will help Amazon gain greater control over speed to market, process efficiencies and costs — and the exclusivity will boost loyalty. I also expect more omnichannel evolution, including 365 e-grocery, voice ordering and in-store tech such as checkout-free shopping. 365 stores will expand the company’s market reach. That’s because 365 is dedicated to younger shoppers, selling more affordable products while delivering the convenience of a smaller format for busy shoppers. Meanwhile, the mainline stores will still appeal to more “seasoned,” upscale, urban consumers, who may enjoy browsing the more spacious stores. I wondered about Amazon’s partnership with Kohl’s: It didn’t make sense… Read more »
2
|
0
-   Share

IIRC, nobody here thought much of Kohl’s hybridization plans for groceries, in general, and 365, in particular, seems an even odder fit, at least as far as their respective target demographics go (or perhaps as I perceive their target demos to be).

But everyone involved has lots of time and money, so I wouldn’t be surprised to see a few tests run. What they will do with the result of those tests of course remains to be seen. Though Amazon is always quick to jettison ideas it doesn’t like, it’s often hard to determine what “doesn’t like” looks like. Profitability — at least in the short term — doesn’t seem to be the primary metric.

I just visited the new Brooklyn location (one subway stop from my desk). It’s positioned a block away from Atlantic Terminal, a major transit hub served by multiple subway lines and the Long Island Railroad. While technically in the Fort Green neighborhood of Brooklyn, it’s at a crossroads of that highly-gentrified brownstone area and Brooklyn’s booming downtown, drawing both the artsy hipster crowd and long-time locals. The store is set at the base of a new mixed use apartment building, on the opposite side of the block as the new Apple Store and adjacent to BAM (the Brooklyn Academy of Music — a big cultural center). The ground floor level is small. You’re greeted in the foyer by an Amazon Locker, the only obvious sign of the e-tailer’s involvement. The rest of the floor holds a collection of foodie vendors, eating tables and the “POURit Authority” station (cute) where customers can get beer, cider and wine on tap. The surprisingly spacious lower level is served by a set of escalators. To the left as you… Read more »
0
|
0
-   Share

Braintrust
"Dropping a grocery department in the middle of a mass merchant is not as simple as it seems."

"Co-location is definitely the way to go. It’s happening a lot in the U.K. right now..."

"I don’t think we need another grocery chain competing for a continually smaller piece of the pie."