Why does Amazon want a branded TV? 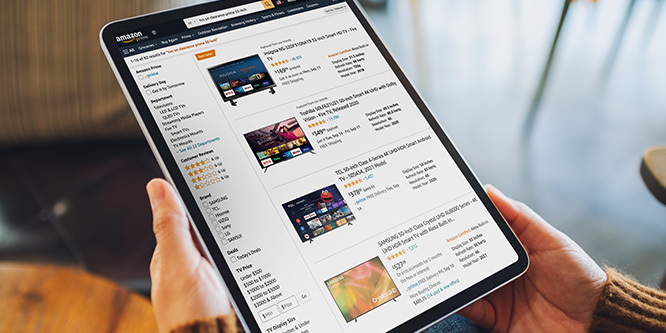 Amazon.com reportedly plans to market its own branded TVs in the U.S., possibly as soon as October.

Citing sources familiar with the matter, Business Insider said the TV will be designed and manufactured by China-based TCL, range between 55 to 75 inches and have Alexa built in. Amazon Devices and Lab126, the R&D team behind the Kindle and Fire TV Stick, are collaborating on the project that’s been covertly in development for nearly two years.

Amazon is also developing a separate TV product that it is designing in-house, according to the report.

In the TV space, Amazon offers a streaming service, Amazon Prime Video, to Prime subscribers and sells a wide range of Fire TV devices that hook up to TVs to deliver streaming content. An Amazon Basics TV has been sold in India Since late 2020. Amazon earlier this year partnered with Best Buy to sell Toshiba and Insignia TVs that run on Fire TV software.

It is unknown whether Amazon plans to compete head-on with Sony, LG and Samsung or target the budget market as a way to further extend Alexa technology’s reach into households. A few analysts seem to be betting on the latter.

“The idea appears to be ‘owning the living room’ as a hub for entertainment and retail purchases,” Wells Fargo analyst Steven Cahall speculated in a note last week, according to Investor’s Business Daily.

Bradley Gastwirth, at Wedbush Securities, said, “Clearly Amazon is looking to significantly broaden its position in the home.”

Amazon’s consumer electronics pursuits include its $1 billion purchase in 2018 of video doorbell maker Ring. Amazon has suffered some flops with its in-house developed products, such as with the Fire Phone flop, but also successes with Fire TV devices, the Kindle and the Echo smart speaker that introduced Alexa technology. Alexa voice technology has been integrated across a wide range of smart devices including most recently on an air fryer.

The habit of using Echo to make purchases, however, has been slow to develop with many believing the reluctance is due largely to the lack of a screen. A screen version, Echo Show, debuted in 2017, but most consumers still own smart speakers without displays.

DISCUSSION QUESTIONS: How important is the introduction of Amazon-branded TVs to the company’s efforts to accelerate the use of Alexa-voice technology as a purchasing tool? Do you see major disruption coming to the television category?

Please practice The RetailWire Golden Rule when submitting your comments.
Braintrust
"Amazon will launch a television for the same reason it launched Kindle — for the ad revenue. "

"If Apple was making this announcement, I’d think there was something cool happening. Amazon doing it makes me want to yawn."

"We should expect that the seamless integration of Alexa into this platform will only lead to further adoption and usage of voice commerce and streaming capabilities."

20 Comments on "Why does Amazon want a branded TV?"

This news doesn’t surprise me. The opportunity that this presents for Amazon is pretty incredible. (Why didn’t I think of this!) Seriously, the integration of Amazon’s technologies, like Alexa, into an Amazon branded TV is strong, but there is more opportunity than just that. Once Amazon proves their technology integrations work, it’s only a matter of time before they are licensed to other brands. Could this be as big as a Microsoft operating system is to computers?

Now this may actually drive conversion to Alexa voice adoption. This is also a smart move in growing Prime Video as long as there are exclusive viewing rights to owners of the Amazon TV on that platform. The key to driving Alexa voice adoption will be tying already popular and easy-to-adopt products within an ecosystem of convenience. This TV roll-out accomplishes exactly that.

It’s actually surprising that Amazon didn’t have their own TV until now. Granted, Amazon Fire Stick did fill the gap to an extent, but a TV with its own tweaked operating system with Alexa would take the integration into its ecosystem to the next level. Amazon has been largely successful in creating low-cost pieces of hardware that are gateways to selling its content and e-commerce – Kindles, Fire tablets, Echo devices, etc.; except their phone which was a notable failure. To be fair, phones are a different industry altogether.

Amazon has long been subsidizing their hardware with an ads option. I expect same for TVs. Expect their TVs to be priced at par or lower than Vizio with very good specs, and supported by ads.

This will be an interesting one to watch. An Apple branded television has been rumored for many years – with many disappointed. It could well be that Amazon sees the TV market as too competitive to warrant a premium product.
Therefore it is likely that Amazon will go after the lower end of the market and it will be a way to get their content (perhaps they will bundle with a Prime subscription?) into homes but also then incorporate contextual advertisements into content allowing watchers to tell Alexa to buy.

I agree with the projected placement, Oliver. I own a couple TCL Roku TVs and that quality picture (which is quite good) + Amazon bells and whistles seems to make sense. It will be the easiest way to get the largest footprint in homes so they can micro-monetize, and that is clearly what Amazon is after — not high-end prestige.

TV seems like a no-brainer because they have the brand recognition, can compete on price and have the audience. Beyond owning the living room, they want to own consumption; food, products, and media.

I struggle to think there is a major disruption coming in this category. I think they see an opportunity to get into this category and believe, like the article says, they can broaden Alexa’s reach. Maybe there is a play within media purchases but those types of innovations always take way longer to adopt than anyone ever thinks.

If Apple was making this announcement, I’d think there was something cool happening. Amazon doing it makes me want to yawn. And don’t get me wrong, there is a ton of money in yawns. While I’m yawning, they’ll make a billion dollars.

While “owning the living room” appears to be an obvious motive, I think it opens up opportunities for Amazon to design a TV that makes it easier to browse the internet, “watch ads” and shop presenting a closed-loop advertising opportunity to marketers.

I see so many possibilities here for Amazon, including, as the article states, “owning the living room.” Imagine Ring integration, so you can see who is at your door right on your TV, much like Caller ID for the phone. Imagine a control panel for all the smart devices in your home, controlled on a 60″ dashboard, including voice controls. Imagine, albeit a bit further out there, being able to purchase products from within Prime Video content as you watch it, simply with your voice. I can definitely imagine all of these things in the future of Amazon TV. What I can’t yet imagine is Amazon TV driving more shopping on Alexa (outside of the aforementioned Prime Video product placement opportunities).

I would never bet against Amazon. Amazon TVs are a logical next step after the Kindle, Fire Stick and Alexa. In addition, an Amazon TV loaded with the rest of its digital array is a good defense against Roku TVs and Apple digital products (TVs, Siri, etc.). Plus look at Amazon’s success in branding everything from household products, furnishings, batteries, etc. Amazon’s own-label product have received great acceptance by consumers. Why should an Amazon TV make any difference? All those directly involved (TV manufacturers) and other ancillary products beware, the next wave of Amazon expansion is coming.

Amazon will launch a television for the same reason it launched Kindle — for the ad revenue. I think their television will follow a similar path — Amazon didn’t make any profit on the actual Kindle hardware sales, but averaged $300 million to $500 million per year on the ad revenue. This is just another building block in the fortress walls Amazon is building to keep customers inside their retail ecosystem.

Adding TVs is essential to speed up Alexa adoption as media and e-commerce converge. (Especially if we stay home more.) By blending Alexa’s audio with big-screen visuals, Amazon will enhance consumer certainty and trust to drive sales.

The television category is ripe for disruption. Combining hardware and content subscriptions helps companies like Amazon reach the masses and lay the foundation for personalized shopping experiences.

As such, expect more brands to turn to digital advertising and data insights to optimize how they reach consumers in their homes.

Like most Amazon things this is all about building the ecosystem. There’s the opportunity for integration of Alexa and Amazon content. Plus Amazon will, presumably, be able to gather data on people’s viewing habits which can then be used to feed back into decisions around marketing, product development and so forth. There are so many opportunities that go way beyond simply selling televisions.

This is about building an ecosystem much like Apple. This is not a surprise and it’s a big leap towards adopting Alexa devices and making it easier to order product from Amazon.

Smart TVs are another way for Amazon to extend its branding, reach and obtain valuable insights about their loyal prime customers. Certainly, an Amazon-branded smart TV will offer yet another engagement platform for the Seattle e-commerce giant. The ongoing streaming content battle for customers’ hearts, minds, and wallets is only getting more complex and congested.

We should expect that the seamless integration of Alexa into this platform will only lead to further adoption and usage of voice commerce and streaming capabilities. It will be interesting to see how extensive the Prime video content library evolves into with this Amazon-branded smart TV.

This is such a crowded space that the only reason Amazon wants to be in it is to expand its “home” electronics reach and messaging. Anyone and everyone can brand a TV because there are so many “glass” manufacturers, and middlemen who will make this happen.

What better beginning data to determine what people want going forward than by knowing what they like now? Also, you know Alexis listens AND responds, but that aside, couch-potato heaven is, “hey, Alexa, find me that show White Lotus” and never fumbling with the existing 2-3 gadgets we now have ever again. Looking forward to it! (‘cept the listening part….)

Amazon disrupts every category they enter. If the technology works well, the television category will not be immune to the Amazon effect. The only question is whether Amazon will eventually be a major player.

Ever read the unbelievably invasive data privacy agreements that LG and Samsung more or less give you no choice but to accept if you want to actually use the TV you just purchased with a reasonable amount of functionality? Amazon wants the data!

Please tell me that they are not going to name it HAL.

Why not? Amazon already has a large number of offerings around the Amazon basics plus the Fire TV brand and Alexa. Putting their brand on a television and embedding Alexa plus other technologies is a very natural extension.

Braintrust
"Amazon will launch a television for the same reason it launched Kindle — for the ad revenue. "

"If Apple was making this announcement, I’d think there was something cool happening. Amazon doing it makes me want to yawn."

"We should expect that the seamless integration of Alexa into this platform will only lead to further adoption and usage of voice commerce and streaming capabilities."