Why is Allbirds asking Amazon to do a better job ripping it off? 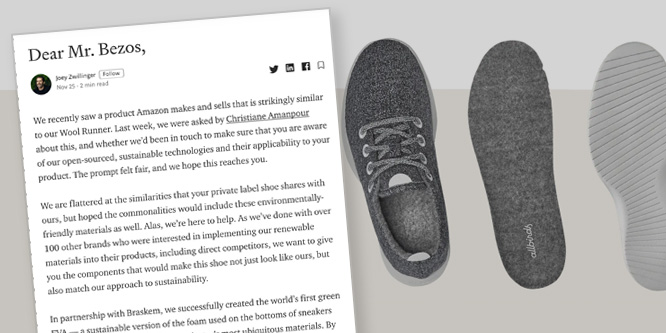 Allbirds, the sustainable footwear upstart, didn’t sue Amazon.com for making a wool sneaker that mimics one of its popular models. Instead, it is encouraging the e-tailing giant to do a better job of copycatting its products, even offering to help Jeff Bezos and company do so.

In an open letter on Medium to Mr. Bezos, co-founders Joey Zwillinger and Tim Brown wrote that the $45 Wool Blend shoes from Amazon’s 206 Collective line were “strikingly similar” to Allbirds’ Wool Runners, priced at $95. But the similarities didn’t go far enough.

“We are flattered at the similarities that your private-label shoe shares with ours but hoped the commonalities would include these environmentally friendly materials as well,” read the note. “As we’ve done with over 100 other brands who were interested in implementing our renewable materials into their products, including direct competitors, we want to give you the components that would make this shoe not just look like ours, but also match our approach to sustainability.”

The letter then explained how Allbirds partnered to develop a sustainable version of an EVA midsole foam and about its other efforts to reduce its carbon footprint. Amazon was offered the opportunity to borrow Allbirds’ SweetFoam formula free of charge.

“If you replaced the oil-based products in your supply chain with this natural substitute (not just for one product, but all of them), we could jointly make a major dent in the fight against climate change. With the help of your immense scale, the cost of this material will come down for all users of this material, allowing for even broader adoption,” the note stated. The founders concluded by urging Amazon to “please steal our approach to sustainability.”

The note was provoked by a CNN interview in which Christiane Amanpour asked whether Amazon was aware their SweetFoam formula was open-sourced. Mr. Zwillinger replied that suing Amazon would be “like bringing a knife to a gunfight.”

Amazon has been accused in the past of using insights from strong sellers on its third-party marketplace to create a wide range of private label knockoffs.

DISCUSSION QUESTIONS: What do you think of Allbirds’ approach to copycat infringement? How do you expect Amazon will react to being called out in this way by Allbirds?

Please practice The RetailWire Golden Rule when submitting your comments.
Braintrust
"We’re all talking about what we can do to take better care of our planet, so inviting Amazon to steal [Allbirds'] unique approach to sustainability is genius."

"I do hope for Allbirds’ sake that they have a patent in there somewhere."

16 Comments on "Why is Allbirds asking Amazon to do a better job ripping it off?"

This is a marketing technique–not a new one, but potentially a useful one. When a Goliath is accused of copying David’s product, the usual defenses would be a protracted and expensive lawsuit that unlikely would be fruitful or a typical volley of accusations and grabs at sympathy. This technique gives the appearance of “the high road” using subtle intonations and reverse psychology to demonstrate to consumers both brand tactfulness and product differentiators.

Whether it works for Allbirds in the face of Amazon’s market reach will be an interesting test of how loyal its customers or its type of customers are to their products/brand.

Ken is correct that this is a marketing technique and I think it is brilliant.

Prior to this morning, I didn’t know about Allbirds and now I not only know what they offer, but they have told me exactly why I shouldn’t feel good about getting their product cheaper at Amazon.

Allbirds’ approach is certainly novel and highlights the infringement issue many sellers have had with Amazon without provoking a direct conflict. I agree with Mr. Zwillinger’s comment that getting into a legal battle Amazon would be a losing proposition. My expectation is that Amazon will find a lighthearted way to respond or let the issue just quietly go away.

The headline about Allbirds asking Amazon to do a better job of ripping it off made me smile. I might have to use this approach the next time we find someone “borrowing” our materials and claiming them as their own.

Seriously though, this is a smart PR move – and a love letter to Allbirds efforts to reduce its carbon footprint by creating environmentally friendly materials. Plus, taking Amazon on in this friendly way exposes more consumers to the Allbirds brand. We’re all talking about what we can do to take better care of our planet, so inviting Amazon to steal its unique approach to sustainability is genius.

This is a smart move and allows Allbirds to take the high road, and reap the benefits of great PR. Suing Amazon is not practical and would not generate nearly as much goodwill. This fits with the Allbirds’ brand image of a being “do-gooder.”

Smart move on Allbirds’ part – for the “anti-Amazon” crowd, it gives those people a reason to support Allbirds. As for Amazon, it’s doubtful the move will do much, but I hope they do start to consider more sustainable products within their assortment.

“Please steal our approach” … Allbirds is trying to reposition Amazon with these knock-off shoes by showing its leadership in sharing important environmental-friendly materials. This also is telling the world about their values. Good move. I don’t expect Amazon to do anything except move forward.

I find Allbirds’ response to be brilliant. Brilliant in its economy of both dollars and drama. A simple statement of truth — and shame. Let the circumstances speak for themselves. Brand reinforcment for Allbirds and a much deserved ding for Amazon.

The one thing I know now is that the $45 Amazon knock-off is not the same as the $95 Allbirds shoe.

The shoe business is interesting in that competitors can legally copy, almost to the stitch, another company’s design. Allbirds knows it can’t stop Amazon, but it can inform the public that there are differences. The way they are going about it is brilliant and should be included in business schools’ marketing and PR best case studies for how to deal with this type of competition.

I love the approach. What reaction does Amazon have, if any, to this message? It’s best for them to ignore it and move onward. I’m not sure it will change anything about Amazon continuing to copy product. Also, this is the least of the trademark issues facing retail. We’re nowhere near addressing the problem of China’s IP infringements. Let’s talk about that.

I do hope for Allbirds’ sake that they have a patent in there somewhere. Otherwise, as good a short term marketing move as this is, the short term brand building needs to last a long, long time if Amazon does take them up on their offer.

Just as Amazon has capitalized on the publicity machine, Allbirds has taken a strong, very creative stance to drive their environmental consciousness and sustainability strategies in light of the copycat controversies. There certainly is an element of Allbirds taking the moral high ground in this situation, especially as Amazon’s private-label offerings are so close to their proprietary products.

Amazon has routinely expanded its private-label offering, especially as an increasing number of retailers have entered into their marketplace. Customers could take advantage of the choice and lower prices of Amazon’s private-label products. However, Allbirds’ social and environmental stance matters and this really resonates with today’s woke customers.

What I take away from Allbirds’ reaction to Amazon is that the company truly cares about sustainability. That is their mission first and foremost – they choose to do it through footwear. By encouraging Amazon to do the same, it reinforces that they will not compromise on their cause. Kudos to Allbirds for taking the high road. As the saying goes, “imitation is the sincerest form of flattery.”

On the surface, Allbirds’ bold approach seems like devotion to the greater good vs. greed.

Yet Allbirds’ strategic reply is PR gold, as a disruptive David calling out an e-commerce Goliath for copyright infringement. Business editors love unexpected stories of conflict, so Allbirds’ response will boost media coverage, brand awareness and interest at the precise moment consumers are shopping for holiday gifts.

Ultimately, Allbirds accepts that, “If you can’t beat ‘em (in court), join ‘em.” In response, Amazon will likely let Allbirds enjoy its day in the spotlight rather than punch back.

This is a great position to take with Amazon. In fact, it would have been even better if Allbirds had offered to supply Amazon with their key components to better control the supply chain, product quality, and component focus for key products.

Braintrust
"We’re all talking about what we can do to take better care of our planet, so inviting Amazon to steal [Allbirds'] unique approach to sustainability is genius."

"I do hope for Allbirds’ sake that they have a patent in there somewhere."