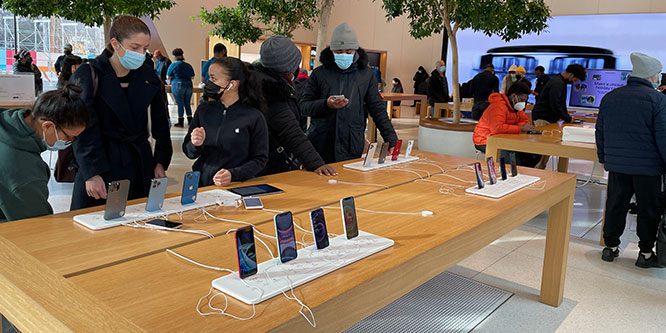 Apple said last week that it will increase starting wages for its U.S. retail to $22 per hour, up from $20 and representing a 45 percent hike from 2018 levels.

Management will also raise wages for corporate staff amid a historically tight labor market and employee concerns about the cost of living impact of inflation. Google, Amazon.com and Microsoft also adjusted compensation structures in recent weeks. In some markets, Apple’s retail starting pay will be above $22.

The new pay will take effect in early July, according to The Wall Street Journal.

“Supporting and retaining the best team members in the world enables us to deliver the best, most innovative, products and services for our customers,” Apple said in a statement.

Scores of retailers have raised pay and enhanced benefits over the last two years in the competitive job market. The pay increases also reflect hikes in the minimum wages and tensions faced by associates working on selling floors during the pandemic.

Costco, often lauded for its generous pay, last year raised its hourly minimum wage to $16 from $15 and indicated that its average hourly rate is $24.

Apple’s move to raise pay arrives as workers at company stores in New York, Maryland, Atlanta and Louisville have announced their intent to unionize.

Apple has been accused of illegal union-busting tactics. In an internal video leaked to The Verge, Apple VP of people and retail Deirdre O’Brien said, “I worry about what it would mean to put another organization in the middle of our relationship. An organization that does not have a deep understanding of Apple or our business. And most importantly one that I do not believe shares our commitment to you.”

The chain recently announced plans to increase wages on top of increases due in August although the new pay hikes won’t automatically apply to unionized stores. During a quarterly call on May 3, interim CEO Howard Schultz said federal law “prohibits us from promising new wages and benefits at stores involved in union organizing.” Mr. Schultz did not disclose, however, that Starbucks is not legally prevented from asking the union if its members would accept the change in benefits.

According to the Bureau of Labor Statistics, the average hourly earnings for all workers in April rose to $31.85 an hour, up from $30.20 a year ago.

DISCUSSION QUESTIONS: Is Apple’s move to raise retail starting pay likely more about the hot job market or fighting unionization? Is higher pay the most effective tactic to dissuade unionization?

"If only decent pay could solve all our problems."

"You have to do something with that $200+ billion cash reserve to maintain appearances of fairness to employees."

15 Comments on "Will $22 starting pay squelch unionization efforts at Apple?"

I suspect Apple’s move to raise pay is both to discourage unionization and retain/attract talent in a hot job market. The unionization movement is about a lot of issues, but pay is always one of them. Raising pay proactively eliminates this issue and, given the hot job market, it makes Apple an even more attractive employer. I think Deirdre O’Brien’s comment strikes to the heart of where leading employers like Apple and Starbucks are coming from: “I worry about what it would mean to put another organization in the middle of our relationship.”

Both. Satisfying stellar staff reduces the risks of turnover and unionization. Raising wages can deescalate workers’ fight and outweigh their desire to leave. If workers are content, they will stay loyal.

You have to do something with that $200+ billion cash reserve to maintain appearances of fairness to employees. The problem is Apple is an employer of choice already so it isn’t a hot job market. I think the movement to unionize is gathering steam and anything Apple or others can do to squelch it will be helpful.

Like all retailers Apple faces a very tight labor market. It also faces unionization efforts at a growing number of its locations. Which weighs heavier in its decision to raise wage is something we may never know but the impact for the company and its employees is the same. Apple’s labor cost is going up and its employees are getting a significant raise.

One measure of a brand’s power is its margins. And Apple is a powerful brand with healthy margins. That power is derived from superior product and superior customer experience. This pay raise will magnify Apple’s stature as a go-to employer and will put even more distance between Apple and the competition.

I wonder if Starbucks workers are disappointed in their jobs or if the money put on the table would create a blockade to union discussions. I have not heard one associate in Starbucks complain of wages or working conditions, and I have gotten to know quite a few. I think this move up to $22 will stagnate or slow union considerations and, at the same time, bring peace to the counter and staff.

I’m not sure that higher pay is the MOST effective way to prevent unionization, but by the time a company is in a position that they are actively trying to “dissuade unionization,” it is probably only one of the few levers left to pull that will make a difference.

Silicon Valley has spent half a century living in fear of unions. While this has offered select advantages it has also brought disadvantages they don’t discuss. Tech companies they struggle to find a well-trained workforce (asking the government to do it for them), lack a partner in the business of maintaining workforces, and suffer brain drain when the workforce is mistreated. This is a stale mantra at this point – Apple should welcome the challenge to become stronger.

Apple wants the best people to take care of their customers and maintain their reputation for an amazing experience. You get that from hiring and retaining the best. It takes more than high wages, but that’s still a very important part of the equation.

In every exit interview I have ever been in, no one complained about the money. Sure, for lower wage earners it’s probably a motivator, but consistently I learned of relationship issues with immediate managers, a lack of training, poor working conditions, a lack of upward career path, but mostly? A lack of respect. Solve those, along with a wage that people can live on, and you’ll have a great company culture which will leads to a better UX.

A mix of both. Apple has deep, deep pockets so raising starting wages by roughly $4,000 is certainly affordable for them. And clearly that may be less of a raise than a union might demand. Higher pay is the floor of union blocking tactics, but not the ceiling. You have to show good faith when it comes to pay, preferably way before the union shows up. But workers want other things in addition to (not instead of) money, so covering the pay base alone doesn’t necessarily forestall unionization.

It’s about both – fighting to retain and attract talent in a hot market as well as disincentivizing unionization. While salaries is one issue that will matter to retail job seekers, it is not the only one. Apple, Starbucks, and any others need to look at their overall compensation and benefits to ensure they’re creating an enticing workplace that meets the needs of the workforce.

I would say that Apple’s move to raise wages is not about squelching the potential of unionization and more about positioning itself as a great place to work.

The key to fighting a unionization effort is more about how you manage and treat your employees than starting pay.

Apple’s pay raise is about both fighting unionization and the hot job market. Higher pay definitely helps dissuade unionization, but it takes more than high pay. It also takes a good rapport with your employees. Scheduling is a big portion of that. Many employees are quitting either due to a lack of full-time hours or people who want consistent part-time work but are constantly asked to work longer hours. Retail and restaurant staffing is difficult given they tend to have peak selling time periods. It takes a micro-scheduling approach to get the right mix of part-time and full-time staff.

If only decent pay could solve all our problems. It certainly does not hurt. And, it can quickly squash thoughts that the pay is not worth the trouble (whatever that may be for an employee who does not feel heard or validated in their concerns).

In the end, what we have learned from this pandemic is that employees, especially front-line workers want quality of life and equitable treatment from employers. Higher pay can only compensate so much for feeling unsafe, unwelcomed or disenfranchised at work.

Yes, pay what the market and current social circumstances warrant. At the same time, do not use higher pay as an out for addressing emotional concerns that often lead to turn-over, burn-out, lack of loyalty or yes, unions.

"If only decent pay could solve all our problems."

"You have to do something with that $200+ billion cash reserve to maintain appearances of fairness to employees."