Will 365 concept prove to be the future of Whole Foods? 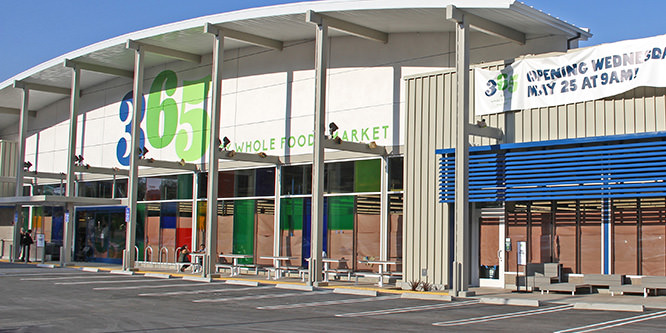 While only two 365 by Whole Foods Market stores have opened so far, “the customer response has been overwhelmingly positive,” co-CEO Walter Robb told analysts earlier this week on the company’s earnings call.

In fact, the amount of goods that customers have been buying at the two locations has forced Whole Foods to redesign their front-ends. The chain had expected smaller market baskets and, therefore, designed what David Lannon, executive vice president operations, called “smaller, teller-style registers.”

While Whole Foods has been hurt by the labeling of the chain as “Whole Paycheck,” lower overhead costs at its 365 stores is quickly producing a value perception of the new concept. A report on the Today website claims that a market basket comparison on like items at Trader Joe’s and 365 by Whole Foods showed the new concept was in line or lower priced than its rival.

If this price comparison holds, it could be a game changer. A market basket comparison of 77 similar items by Deutsche Bank published earlier this year found Trader Joe’s was 21 percent lower than Whole Foods mainline stores.

Further emphasizing price, the new 365 stores, according to Mr. Lannon, will also offer Whole Foods’ new “Gimme 10” loyalty card program, which enables customers to receive an additional 10 percent off selected items. So far, over 16,000 individuals have signed up for the program at the two 365 stores.

“Our 365 stores are firsts for us in so many ways, from a streamlined operating model, to centralized buying, to auto-replenishment of inventory,” Mr. Robb told analysts. “With 20 stores in development, we’re very excited about the learning potential, and we are already using these to shape and evolve not just future 365 stores, but Whole Foods Market stores as well.”

DISCUSSION QUESTIONS: What do you take from the early reports of success for Whole Foods’ new 365 concept? How do you expect Whole Foods will change its mainline stores based on findings from its 365 pilot?

Please practice The RetailWire Golden Rule when submitting your comments.
Braintrust
"365 is Whole Foods’ opportunity to do smaller more urban stores and cater to pedestrians and quick trip shoppers."

"... might wind up being a growth vehicle for them, BUT — their flagship stores are not going away, they’re just too good."

"While it’s tempting to compare 365 with Trader Joe’s, I think an equally challenging competitor could be 220-store Sprouts..."

13 Comments on "Will 365 concept prove to be the future of Whole Foods?"

Whole Foods recently opened a regular Whole Foods near me in Wauwatosa, WI. Seems to be a disappointment and they have seriously compromised their hiring standards. Regardless of what concept they open, I get the feeling they are running out of high quality labor. Whole Foods is not alone, we have a huge labor shortage of high-end employees. Anytime a company opens a new format the company will always tell you, “the customer response has been overwhelmingly positive.” Even Sears would say that. Fresh & Easy said this. Haggen said this. Perhaps Whole Foods has opened this simpler format because of the difficulty in finding good employees. I hope they can figure it out because the Whole Foods I see today is not what I saw two years ago.

365 is Whole Foods’ opportunity to do smaller more urban stores and cater to pedestrians and quick trip shoppers. I expect it will be very effective, as the simpler format will allow for more locations, more convenience and more value especially for urban populations.

I predict that we’ll see other grocery chains follow suit until a new, smaller format is established that has more product types than a convenience store but fewer choices in each category than a full supermarket. This is in keeping with decreasing incomes, continued urbanization and the need for grocery stores to offer high convenience.

What’s key for grocers now is to have a portfolio of concepts and size variations so they can be flexible to service several different customers and demographics. 365 is a great step in the right direction for Whole Foods and might wind up being a growth vehicle for them … BUT, their flagship stores are not going away, they’re just too good.

If you look at the “disappointing” numbers around Whole Foods lately, they’re still profitable, they’re still quite impressive, they’re just not as stellar as they used to be. I’ve always believed that you have to look at the concept and the execution, not at what Wall Street thinks their numbers should be. And to me, a Whole Foods store is still leagues above the competition in both those categories. Here’s to 365 and the next piece of the portfolio.

On a macro level, the early success of 365 underscores the need for all retailers to be constantly re-thinking their formats, their operations and offerings. Specifically, it would appear that Whole Foods has found a niche that is more receptive to a broader segment of shoppers, i.e., that are more price conscious, but yet still value an up-market shopping environment.

Building off of David Livingston’s comments, from the retailer’s side of things there is no doubt that a less service-intensive store is easier to staff and operate, therefore more scalable. The question still remains as to how large the 365 niche is, and how their competitors will react to regain lost business.

Whole Foods’ core value proposition appears tired at this point as rivals have matched its fresh offerings at lower prices. Its challenges are evidenced by its announcement yesterday of its fourth straight quarter of same-store sales declines.

365 gives Whole Foods an opportunity to reset its operating model and better compete against its arch enemy Trader Joe’s. 365 still has a lot to prove, but it could give Whole Foods a winning formula going forward. We should watch for indications from Whole Foods about applying the learnings from 365 to its traditional stores.

While it’s difficult to draw conclusions from just the first two stores, lower operating costs and simplified pricing may allow 365 by Whole Foods to keep prices in line with rivals like Trader Joe’s and mainstream supermarkets. There’s a fair amount of cost-saving innovation going on — like less labor, electronic shelf labels, prepackaged meats and energy-saving technologies — but the real difference seems to be in the assortment itself. I’m sure there will be plenty of certified organic and sustainably-sourced products, but I suspect the ratio of luxury food items will be lower compared with the classic Whole Foods stores. While it’s tempting to compare 365 with Trader Joe’s, I think an equally challenging competitor could be 220-store Sprouts, which has positioned itself as the healthy food supermarket for the masses across the southwest. Other regional competitive pressure comes from Natural Grocers (96 stores), the Colorado-based chain, and The Fresh Market, based in Greensboro, NC with 185 stores. Whole Foods has earned most of the headlines nationally, and at its core it’s really a… Read more »
0
|
0
-   Share

The ERP elements of the 365 store concept are long overdue. Centralized buying and auto-replenishment have been accepted practices in grocery for some time. If those factors drive the cost savings, then all is to the good.

However, by reducing customer-associate contact in the store and making it more self-serve, Whole Foods risks alienating the customer segment that builds personal relationships and needs associate support in-store. The self-serve segment may be valuable in the short-term, but ultimately will be limiting over time.

Whole Foods, in spite of its “whole paycheck” image, has brand equity to leverage with current and prospective shoppers. Their image of quality products allows Whole Foods to easily attract customers to its 365 initiative because they’re offering convenience and value proposition associated with high quality products.

The smaller store concept is a format that many retailers are experimenting with, especially in urban centers. Understanding shopping behavior and utilizing that understanding for business planning seems pretty fundamental.

I expect Whole Foods to use shopper behavior insights to guide planning for their mainline stores. If customers want more 365 (or similar) options it will make sense to offer just that, along with other products, but streamlined based on that store’s transaction history.

The statement that “lower overhead costs at its 365 stores is quickly producing a value perception of the new concept” seems like a tacit (and somewhat overwrought) admission that Whole Foods is simply overpriced. The “service tax” one pays at Whole Foods has thus been revealed by, of all folks, Whole Foods. So it’s hard to see how they won’t simply be forced to implement these newfound operating efficiencies into their larger-format stores.

Also, Trader Joe’s has, in my experience, provided stellar service, so the notion that 365 is a “step down” to Trader Joe’s level seems misguided.

This idea (of the child overtaking the parent) seems to have its parallel in department stores, where various “off-” this or “-rack” that stores have become the growth engines. But I’m reluctant to draw too many conclusions based on (only) two stores … however successful they might be. After all, WFMI isn’t some startup — it has had a winning formula that has worked quite well for years.

The challenge for Whole Foods is that 365 may be a new concept for them but it is not a new concept within grocery retailing. In other words, there are grocery retailers, especially Lidl, that consumers will gravitate towards as Lidl expands. I have been in the 365 Whole Foods located in Lake Oswego and I found the store interesting but not earth shattering. Frankly, I’m surprised that Whole Foods didn’t acquire Sprouts and re-brand the stores as 365 Whole Foods. A bigger issue for Whole Foods is that their corporate reputation is taking a hit due to quality issues and price gouging; all of the criticism is warranted. In addition, Whole Foods just lost their trademark fight to be known as the “World’s Healthiest grocery store.” Consumers already distrust Whole Foods and volumes has been written about how expensive whole foods is when compared to other grocery retailers. Simply put, 365 Whole Foods will not be enough to prevent the company from experiencing declining market share if consumers believe Whole Foods is more of… Read more »
0
|
0
-   Share

Kudos to Whole Foods for truly listening to consumers and designing a store format that is radically different than their flagship store model. As evidenced by the phenomenal success of Trader Joe’s, consumer flock to the boutique grocery store model with limited, but highly desired items at value prices.

The smaller footprint of the 365 concept will also enable Whole Foods to expand into dense urban locations that can’t support the large footprint financial model of the tradition Whole Foods stores. Additionally, the success of the 365 loyalty program might drive Whole Foods to introduce a similar program at their traditional stores.

Based on early results, it appears that Whole Foods as hit a “home run” with the 365 by Whole Foods Stores and don’t be surprised if you see one opening near you in the future.

Simplified pricing coupled with lowering operating costs is the future of all retail.

Good service, as defined by customers, increasingly excludes “sales help.” The Holy Grail is a showroom or store that doesn’t require sales help because it’s seamless without them. Most sales help is helpless and annoying.

Braintrust
"365 is Whole Foods’ opportunity to do smaller more urban stores and cater to pedestrians and quick trip shoppers."

"... might wind up being a growth vehicle for them, BUT — their flagship stores are not going away, they’re just too good."

"While it’s tempting to compare 365 with Trader Joe’s, I think an equally challenging competitor could be 220-store Sprouts..."