Whole Foods rents out space to ‘Friends’ in new 365 stores 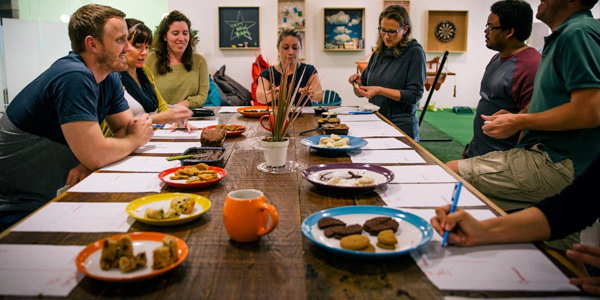 While smaller in size and less expensive than its parent’s flagships, 365 by Whole Foods Market will also feature “Friends of 365” partnerships with small businesses that will operate independently inside each store.

At its first location to open May 25 in the Silver Lake neighborhood of Los Angeles, a New York-based vegan restaurant named CHLOE will open in a spot adjacent to the fresh produce section. Allegro Coffee Co. will serve coffee and beer at a separate venue while a personalized tea-making experience will be delivered by startup, teaBOT.

“We’ve really dedicated ourselves to partnering with like-minded companies that are doing new and interesting things in their respective field to bring a truly unique shopping experience that complements our thoughtfully curated selection of foods,” said Jeff Turnas, president of 365 by Whole Foods Market, in a statement.

For its second location to open in July in Lake Oswego, OR, two Portland-based eateries — a plant-based burger concept and café and juice bar — will establish in-store shops.

On the Friends of 365 website, applicants offering video submissions are told they “don’t have to be food-related only” with images of women’s dresses, yoga and cycling shown in addition to food and beverage offerings. The application process is closed but will open up again later this year.

Friends of 365 appears to be an extension of programs already tested at Whole Foods. At its Bowery store in lower Manhattan, food truck vendors from Smorgasburg, the popular Brooklyn flea market, occupied the shop’s cafe a month at a time from late 2012 until 2014.

On its fourth-quarter conference call, Ken Meyer, EVP of operations, said 365 is allowing the retailer to aggressively test ideas.

“There’s no culture. There’s no legacy there to overcome,” said Mr. Meyer. “So we can go radical on 365 stores and, assuming those are going to work as well as we think they do, they will serve to help accelerate transformation within the mother brand, Whole Foods Market.”

DISCUSSION QUESTIONS:
What do you think of the “Friends of 365” in-store shops initiative? How would you assess the pros and cons of setting up independent in-store shops in a grocery store?

Please practice The RetailWire Golden Rule when submitting your comments.
Braintrust
"Only potential downside I see is diluting the Whole Foods brand image by placing too many disparate entities under one roof."

"Just what the Millennials need! More ways to spend, spend, spend on "hip," natural foods that really — in the long run — does nothing for them."

"Food court reinvented. Why not?"

What a great idea! Like a farmer’s market within the market — an extremely appealing concept which should draw a variety of shoppers, including many who wouldn’t have otherwise come, which translates to more shoppers overall, more business and more success for all and should put 365 back in the hunt as a competitive store of choice.

I think it makes good sense for Whole Foods. First, we know the trend nation-wide is for smaller store footprints for a variety of reasons: aging Baby Boomers, online competition, urban market opportunities, etc. Second, this initiative allows Whole Foods to be more community-focused. Third, the concept of non-competing offerings under one roof will tend to make the 365 stores more of a destination for time-starved, convenience-oriented customers.

Above are the pros. Only potential downside I see is diluting the Whole Foods brand image by placing too many disparate entities under one roof.

Great idea, but certainly not new. I saw the extreme use of this concept a few decades ago in several European hypermarkets. The strategy there was to create a commercial hub for the community which also included services.

Many large-format retailers have experimented with this to varying degrees of success. I expect the Whole Foods folks have done plenty of homework on this prior to heading down this path.

One suggestion: Use short-term leases that include revenue threshold requirements. For whatever reason, if the space is not successful, it should be refreshed. Successful local businesses sound like a great way to expand the “buy local” theme.

It’s basically the store-within-a-store concept that some of the larger big-box chains have been doing for years. The key is to get businesses that are congruent with Whole Foods and meet their standards. It’s a triple win: Whole Foods, the business and the customer.

Just what the Millennials need! More ways to spend, spend, spend on “hip,” natural foods that really — in the long run — does nothing for them. marketing and brand strength and topics for dinners with fellow Millennials are the value they gain. More power to Whole Foods. Get as much of their wallets as you can. Friends have to deliver a share of their revenue to Whole 364 or 5.

I stick with Kroger brand “Fry’s,” Walmart and Costco. Healthy food, better prices and the lower, un-hip, spend thrift Millennials shop there too.

Our Scottsdale Walmart has more Mercs and Jags (and one Bentley that always shops there) than 365 will ever see.

This is not a new tactic, in fact we have enough evidence to show this will be short-lived. Kroger and Publix implemented this over a decade ago. Kroger used to lease space to dry cleaners, computer repair, boutique fashion, jewelry dealers and more.

Today, we can look at grocery stores leasing space to banks to have walk-up teller services and in addition, allow a vendor to offer sushi rolls for sale so there is nothing new here.

What happened was the Great Recession of 2008 caused a lot of these vendors to close shop, leaving empty space within Kroger and not a pleasant sight for grocery shoppers. In addition, another paradigm came into play — Redbox and the automated vending machine.

It is cheaper and takes up less space to host more fancy vending machines like Redbox or selling iPods from a vending machine than having a huge space reserved for third-party leases.

Food court reinvented. Why not?

Works within their brand. Good way to offset some real estate cost and draw traffic. I would expect a mostly positive reception. Vetting of participants is important to guarantee consistent customer experience and to shield the brand against any third-party negative interactions.

In many communities, Whole Foods has become the “meet” location, where you run into your friends and neighbors … the RTA’s community watering hole. It makes sense to build around it.

– Inconsistency from store to store, lack of control, possibility of inconsistency with the core brand (though presumably the partnership arrangements will attempt to mitigate this).

Let’s see, I have a new concept and can rent out space to others that I believe fit under the concept brand at no risk, and make money. Duh!

Braintrust
"Only potential downside I see is diluting the Whole Foods brand image by placing too many disparate entities under one roof."

"Just what the Millennials need! More ways to spend, spend, spend on "hip," natural foods that really — in the long run — does nothing for them."

"Food court reinvented. Why not?"