Will a national loyalty program yield rewards for Whole Foods? 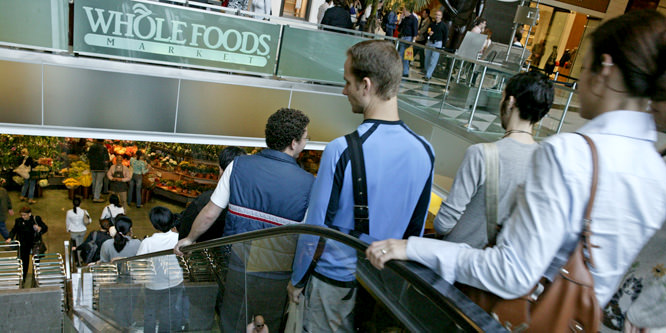 Whole Foods Market is rolling out a nationwide rewards program in 2017.

The grocer’s first rewards pilot launched in Philadelphia in 2014 and was introduced in the Dallas-Fort Worth in late July. The chain offers enrollees “a number of rewards” including 10 percent off the new member’s first purchase, a one-time coupon good for 15 percent off any department and select free products. “The more customers shop at Whole Foods Market stores, the more rewards are unlocked,” Whole Foods wrote in its press release announcing its Dallas-Fort Worth roll-out.

Last week on a fourth-quarter conference call with analysts, Jason Buechel, the grocer’s EVP and CIO, said that nearly 50,000 customers had already registered for the program in Dallas. Said Mr. Buechel, “We are excited about the results that we are already seeing and building findings into our plan to roll to all stores next year.”

The rewards program will be part of an overall greater focus on digital marketing and promotions. Tapping its roughly five million subscribers in its CRM databases, Whole Foods has recently seen an “uptick” in e-mail promotions and will integrate more digital coupons within its new loyalty program. Said Mr. Buechel, “This really allows us to have the ability to target offers as well as learn better around the behaviors of what’s driving folks into stores and making sure that we’re teeing up offers that are relevant for our customers.”

Some foodie websites saw the move as a reaction to competition and an attempt to fight its “Whole Paycheck” image while continuing its shift to become more like traditional grocers.

A.C. Gallo, president of Whole Foods, said on the call that promotions and price investments are becoming an “integral part of our conversation, but we are not participating in a race to the bottom.” He stressed that Whole Foods’ differentiator continues to be its focus on quality food and the experience. He added, “When other people might be promoting certain commodity pricing, we are going to continue to maintain our standards and promote our higher quality products.”

DISCUSSION QUESTIONS: Can Whole Foods successfully use a national rewards program to fight its “Whole paycheck” image without diluting its premium positioning with consumers? Do you like the way the rewards program seems to be structured?

"And no, it won’t alleviate the Whole Paycheck image — at least, not if they do it correctly..."

"People who shop at Whole Foods will do so regardless of the perks of a loyalty program. That’s a beautiful thing. "

17 Comments on "Will a national loyalty program yield rewards for Whole Foods?"

A loyalty program could help Whole Foods fight their Whole Paycheck image while enticing consumers to try more items. And it could work if they manage it judiciously. If it becomes as worthless as the loyalty programs at Ralph’s or Albertsons in the LA area, which are used to support high-low pricing, it could dilute the Whole Foods brand image. To be successful, Whole Foods would need to offer many relatively easy-to-attain rewards and recognize customer loyalty.

Whole Foods will see strong results from the national rollout of their loyalty program. With the shopper data insights gained from the program, Whole Foods will be able to identify key categories of shoppers and target them with relevant personalized offers.

The program will give Whole Foods fans more reasons to shop with the retailer, including discounts that will help Whole Foods build a more aggressive price perception. Most retailers in the supermarket industry are seeing success from loyalty programs today and Whole Foods will benefit from their program as well.

I just don’t see Whole Foods customers motivated by a rewards program. Brand equity for Whole Foods is based on the quality of goods and the types of products offered. That’s the association for their shoppers.

If Whole Foods maintains its array of products and merchandising I think the rewards program will be a ho-hum initiative. People may sign up for it, but will they go to Whole Foods more often and/or buy more at Whole Foods? I don’t think so.

If Whole Foods changes its inventory and merchandising to support a rewards program (instead of the other way around) I think it will undermine their image and customer loyalty. It won’t entice new shoppers.

Bottom-line, I don’t think a rewards program is a good fit for Whole Foods. The downside risks seem greater than any upside value.

“Loyalty programs” are not just about loyalty. They’re about data. Whole Foods needs to strike the right balance in the loyalty value exchange: how much information customers are willing to give up vs. what rewards and benefits they receive. Data (and understanding it) is cost of entry these days. The question for Whole Foods is: can they use the data from the loyalty program to drive additional value for their shoppers? Properly done, it could increase loyalty, brand image, trips and spend.

I’d make one small tweak to Sterling’s reply — “The question for Whole Foods is: can they use their loyalty platform (which include much more than just the data) to drive value for their customers?” And again — my answer is definitely, yes, if they understand that “Loyalty programs” are not just about data :-).

It will be interesting indeed to see whether Whole Foods can roll out its loyalty program and not “race to the bottom.” The focus appears to be largely one-dimensional, focus on pricing, offers and other discounts. Absent a broader focus beyond a transactional loyalty program it’s entirely possible, if not probable, that it will indeed retain customers but dilute its margins, along with its brand.

Loyalty programs offer data on shopping behavior that enable an improved visit experience. Discounts that can encourage specific behaviors are the price of business development. Whole Foods is doing the right thing in taking pages from the playbook of other retailers’ experiences and shaping their program to meet their goals.

Shopper insights are the key to a loyalty program at Whole Foods. Providing discounts alone will only erode their image. Finding inducements to regular customers to buy more and try new products is where the productivity is in the program.

We will likely benefit from a loyalty program if it gives us discounts on what we are already buying, but I don’t see it benefiting Whole Foods, at least with this customer. Send me a coupon on a product I already buy and I will use it, maybe.

For Whole Foods, when the luster wears off it will turn into a race to the bottom, just like every other loyalty program.

BrainTrust
Peter Fader
Professor of Marketing, The Wharton School of the Univ. of Pennsylvania

Every retailer — especially a grocery chain — must have a loyalty program. No exceptions. But it should be a *loyalty* program, not a badly-designed discount program that gives people coupons for stuff they don’t want and/or coupons for stuff that they were going to buy at full price. Those dumb tactics should not be part of a loyalty program in any setting, and certainly not for Whole Foods.

It’s all about learning about customers’ preferences, changing the product mix and merchandising strategies and giving special treatment to valuable customers who benefit from it. That’s what a loyalty program does, and there’s no doubt that it could be a terrific asset to Whole Foods — if they manage it the right way (unlike most grocery chains).

Of course they will. Just look at how the devoted legions of Starbucks loyalists focus on their program. And no, it won’t alleviate the Whole Paycheck image — at least, not if they do it correctly. The kind of loyalty program that will work for Whole Foods is focused on making good customers feel really special. Not on making occasional shoppers feel like they got a deal.

Whole Foods lured in many a customers with the 365 line of affordable organics their competition is local grocers and co-ops, not Walmart.

They are competing less on price than on community tie-ins and interaction. A more vocal focus on community outreach coupled with sourcing from local farms and food manufacturers would be more relevant to the grocer’s margins than hopping on the discount bandwagon.

The challenges facing Whole Foods won’t be resolved by the introduction of a loyalty program that is merely focused on price discounts. Here’s an idea that I do believe has legs, however. What if the program was a lifestyle program rather than a loyalty program wherein Whole Foods partnered with other retailers who cater to the same demographic (e.g., Massage Envy) for a more holistic package of benefits?

It is very late in the game for any retailer to be getting into the loyalty program business unless they are prepared to invest heavily into technology, content, and intellectual property to drive its success. The “loyalty” playing field is jammed with competition and I would suspect that many of Whole Foods’s shoppers are already members of multiple loyalty programs at traditional supermarkets and beyond. To that point, there is a danger in thinking that such a program can in and of itself be the tool that turns Whole Foods’s fortunes around. If mitigating a “high price” image is one of the key tasks for such a program, it has been my experience that “points,” two-tiered pricing, members-only promotions and other margin investments are more often perceived as gimmicks rather than money saving vehicles for the shopper. If a loyalty program is in the future of Whole Foods, it should be worthy of the brand by focusing more on the types of attributes that Whole Foods is noted for such as cooking tips, heads-up tips… Read more »
2
|
0
-   Share

Yes, Whole Foods absolutely can use a national loyalty program to fight its “Whole paycheck” image — but I believe doing so, without diluting its premium positioning, has to involve a value proposition that is less about discount (coupons) and more about partnership.

The introduction of a loyalty program tells me Whole Foods management believes they have a problem with customers who are, apparently, disloyal. I’ll define this as Whole Foods customers who chose to buy the same/similar products elsewhere. If so, it’s time for merchants to revisit how to better differentiate the brand.

A loyalty program for Whole Foods is the wrong direction. They are adopting a traditional mass market perspective for their customers who are, by their presence in the store, willing to pay more for superior product.

Product mix and quality is integral to Whole Foods and it drives their customers; not a faux loyalty program.

It’s not a loyalty problem. It’s a merchandising and marketing problem.

"And no, it won’t alleviate the Whole Paycheck image — at least, not if they do it correctly..."

"People who shop at Whole Foods will do so regardless of the perks of a loyalty program. That’s a beautiful thing. "