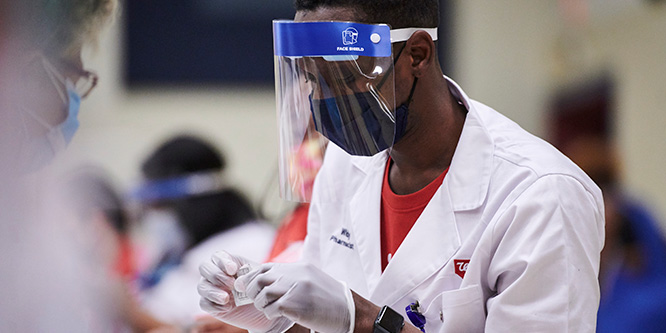 Are sales and earnings at Walgreens and the other major U.S. drugstore chains poised to get a lot healthier or are they going to take a turn for the worse? That question is front and center for investors and other stakeholders that have seen their results shift from bad to better since the novel coronavirus pandemic hit last year.

Walgreens’ third-quarter fiscal report describes to a business that saw an uptick in overall sales and improved  earnings as Americans went to its stores to get vaccinated against COVID-19 and make other purchases. Same-store sales at the chain were up 6.4 percent year-over-year, with pharmacy revenues up 8.4 percent, including immunizations, and front-end retail up 1.7 percent.

The retailer received a boost from its role in the Biden administration’s national vaccination rollout. Walgreens, which has administered 25 million doses from its pharmacies and other vaccine sites, recently introduced a $25 myWalgreens gift card reward for individuals getting immunized. The New York Times reports that the rate of daily vaccinations across the country has fallen from a high of 3.38 million on April 13 to 870,000 at present.

The myWalgreens loyalty program is a key component of the drugstore’s plans for building its business. James Kehoe, CFO for Walgreens Boots Alliance, said on the chain’s third-quarter earnings call that memberships rose 34 percent from the previous quarter and that personalized offers were driving higher purchased numbers from members.

Walgreens partnership with VillageMD to open on-site clinics staffed by primary care physicians continued to be well received by patients, Mr. Kehoe told analysts. The two companies opened 46 new sites in the last quarter and expect to have 80 in operation by the end of the year.

“In addition to these physical co-locations, we formed an integrated virtual healthcare collaboration with VillageMD in an additional nine Walgreens locations,” Mr. Kehoe said. “This will give patients access for the same expanded pharmacy services that are available at the core locations.”

Walgreens is also focused on automating processes to improve health outcomes for its customers. The retailer opened two micro-fulfillment centers to support around 550 pharmacies in Dallas and Phoenix. The two centers are expected to eventually support around 1,000 Walgreens. The chain has identified nine other markets for micro-fulfillment facilities to be up and running by the end of 2022.

DISCUSSION QUESTIONS: What challenges does Walgreens face going forward and does it have the right plan in place to achieve growth? What do you see as the most and least promising among the publicly-known initiatives being taken by Walgreens?

Please practice The RetailWire Golden Rule when submitting your comments.
Braintrust
"Walgreens will continue to perform at an average growth rate but will be hard-pressed to attract and retain customers if the operation can't find a way to reinvent itself."

In a post-pandemic world, essential retailers like Walgreens are going to need to find new ways to achieve sustainable growth. Aligning and expanding health services is a huge and growing opportunity. The collaboration with VillageMD seems like a smart play as is the expansion of on-site clinics. Another area worth exploring is drug manufacturing. Walmart recently announced a plan to source a private label insulin. With some 34 million Americans with diabetes and another 1.5 million diagnosed each year, this is an ideal place to start. And when you consider the obscene pricing/price increases that some drug manufacturers are forcing on an already compromised healthcare system, the prospect of Walmart or other retailers getting into the drug manufacturing business is very appealing.

Walgreens has been boosted by the vaccination program. However despite much excitement about the increased level of foot traffic, not many people who come in for vaccinations are suddenly becoming retail customers. This should not be a surprise: the retail offer is mediocre and does very little to attract customers in its own right or to drive purchasing when people are in-store. The latest plans, including trying to become more of a health destination, make good sense. But once again, retail is neglected and Walgreens continues to miss a big opportunity.

Driving foot traffic was a gift. But were the spaces “ready” with great lighting, clean floors and newish rugs, stocked shelves, great merchandising and happy workers? Because if the answers are yes, then they stand a chance of repeat visits. Otherwise, those visits will be one and done and customers will return back to their preferred shopping location (which is probably Target).

This is yesterday’s plan. Walgreens will have to modify it as the pandemic continues to change and the needs of the population morph in response to the variants and their impact on our vaccination efforts. The VillageMD and micro-fulfillment concepts are both future-bound and look very promising.

Challenges for Walgreens continue to intensify: 1.) competitive pressure (e.g., Amazon and other Rx options); 2.) a commoditized business model; 3.) an outmoded retail experience; and 4) workforce/labor shortages. Walgreens will continue to perform at an average growth rate but will be hard-pressed to attract and retain customers if the operation can’t find a way to reinvent itself. The company has to offer some other reason to frequent its physical stores besides a pandemic.

EVERYTHING in the universe is on a life cycle. It’s born or launched. It grows. It matures. And then it dies. Unfortunately we have become accustomed to delaying new thinking and revitalization until it’s too late. We’ll ride the benefits of the mature stage without giving a single thought to the inevitable. The time for innovation is during the growth of an existing idea if not before.

The old adage that “necessity is the mother of invention” has done us no favors. The one question we all need to ask at the beginning of every day is, “what else is possible?”

Walgreens might continue to get a boost in foot traffic compared to the depths of the pandemic, even without the added bonus of vaccine customers. But it disguises Walgreens’ continuing problems with its store experience outside of its pharmacy business.

In my experience, stores are over-assorted and difficult to navigate, whether you are buying health related products, HBA, or something completely unrelated. (And there’s an awful lot of “unrelated” in a Walgreens store.) Even a new health partnership or an increased emphasis on “convenience” strategies doesn’t clean up the muddle of a typical Walgreens shopping trip.

Because Walgreens stores and operations were lackluster and undifferentiated pre-pandemic they are the most likely to be able to capitalize on the COVID-19 spike, despite their plans. Especially given that others – like Walmart, CVS and Amazon – are ahead on strategy and execution.

Pharmacies, like convenience stores, desperately need to reinvent themselves to remain relevant to consumers over the next decade. With companies like Target, Amazon and Walmart offering all of the products and services normally bought at Walgreens or CVS, why would anyone make an extra trip to a pharmacy once vaccines go away? Partnering with VillageMD is helpful, but it won’t generate enough sales in non-pharmacy product categories to keep the business profitable. The most valuable thing that pharmacies can offer is their existing locations deep within local communities, so partnering with companies like Target and Walmart for click and collect, returns and micro-distribution could help keep them relevant going forward. Otherwise if you are a landlord with pharmacy property you should sell now.

Both Walgreens and CVS had a once in a business-lifetime event to drive traffic to their stores. How each emerges (post- versus pre-pandemic) will for years to come define how well each were able to capitalize on sustainable, core customer metrics.

There has been a rapid increase in health and wellness awareness among the consumer base. It might sound too ambitious, but I believe there will be a decrease in common ailments like diabetes, blood pressure, and cholesterol problems posing risk to the growth opportunities for pharmacies. I think they should pivot their focus towards the preventive side of things and take more initiatives in that space.

Excuse me, but the vaccines meant two — and for one of the choices just one — trips. I find it hard to believe a mid-single digits sales increase can be attributed to THAT. What it did benefit from, of course, was being an “essential” retailer, and while that impact was likely greatest last year, I suspect the effect lingered into 2021. That will diminish with time, and Walgreens, along with every other retailer in a similar position, will have to fall back on its traditional strengths.

Braintrust
"Walgreens will continue to perform at an average growth rate but will be hard-pressed to attract and retain customers if the operation can't find a way to reinvent itself."