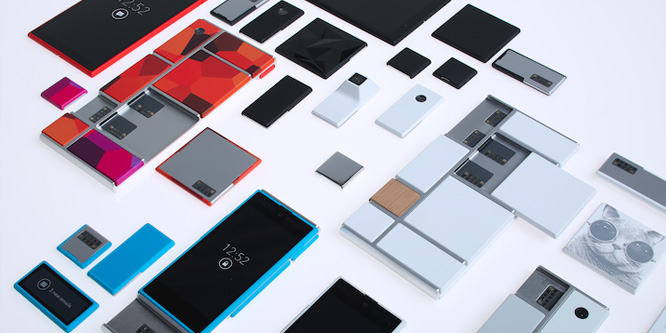 A cracked smartphone screen, a dead battery or a dip in performance, these days, usually means either a trip to a third party to get it fixed or — for those who have the cash — that it’s time for a new phone. Google’s latest patent, though, indicates that the tech giant may once again be playing with technology that would reshape how we buy, use and think of smartphones and how the gadget and device industry would market and sell them.

The patent lays out a smartphone which allows users to easily swap out its display, sensors, camera or system on a chip, according to Techradar. It also lets users modify the device with additional displays, batteries, enhanced memory and other technological improvements. This isn’t Google’s first exploration of “modular” smartphone technology. The company had been working on a fully modular device under the moniker, Project Ara, but the project was abandoned in 2016.

There have been other recent forays from smartphone vendors into modular designs, though none approach the true modularity of the product in the Google patent. For instance, the recently-released Moto Z is, as a YouTube demonstration indicates, constructed to allow users to easily swap phone covers and batteries and even add in-phone speakers.

But recent devices are limited in what hardware can be swapped out, upgraded and added in comparison to the device in the new Google patent.

Were a truly modular smartphone to come into production, it would mean that users might avoid replacing an entire phone for many years. Rather they could buy and easily install replacement parts as things broke and replace outmoded components as technology improved.

This scenario could mean a drastically different marketing and selling landscape for big smartphone vendors like Apple and Samsung, who often profit from hype built up around the impending launch of a new device (though in the last few years Apple has moved away from “launch event” promotions).

Non-vendor retailers that sell devices would also face big changes, having to carry and promote a range of individual components rather than a line card of different vendor devices.

DISCUSSION QUESTIONS: Will modular smartphones be the next evolution of the smartphone, and how would retailers like Apple and others have to adapt? Do you see Amazon, Apple and others rushing to develop such devices if Google releases one, and what would be the differentiator in whose becomes the most widely adopted?

Please practice The RetailWire Golden Rule when submitting your comments.
Braintrust
"It is inevitable. And those companies that develop them will boom. "

"I think it is more of a move for Google to find a way to differentiate from the big competitors..."

"Every business “modularizes” and fails. It’s a classic move when a product begins to run out of dramatic new improvements. But it never succeeds. Why?"

If it is done elegantly, it could be revolutionary. I suspect that the cost of the initial phone may be higher but the promise of being able to extend the life of the phone may outweigh the cost.

Modularization may indeed be the next step — and a logical one given the escalating prices of new phones. As to whether or not others would emulate Google’s lead, I think that all depends on how popular the modular phones are with the public.

The modular smartphone is a great concept if all the modules and their interfaces are an absolute globally accepted standard. Imagine the frustration of buying after-market modules? It would make the computer-printer incompatibility seem trivial! I certainly could see a great advantage if the modules would be designed, manufactured and tested/supported by Google. One of the reasons Apple has been so successful is their total control of the Apple environment.

It is inevitable. And those companies that develop them will boom. Imagine rather than getting the next greatest phone every two or three years, now you are upgrading various modules on your phone each time a company advertises the latest and greatest module. For the companies, selling the pieces will be greater than the whole.

Conceptually, modular smartphones are an appealing approach to extend the life of smartphones. This move from Google, with only 2 percent of the North American marketshare for smartphones, won’t likely compel other smartphone vendors to follow suit. While I like the idea, I think it is more of a move for Google to find a way to differentiate from the big competitors (Apple and Samsung).

I expect companies will try. But they are fighting an uphill battle against consumer truths. Yes, customers might say they “want” them today. But what’s the clearer reality?

Every business “modularizes” and fails. It’s a classic move when a product begins to run out of dramatic new improvements. But it never succeeds. Why?

First, it blurs value. When advertising the iPhone X, Apple can talk about that phone, make promises, show what you’ll get. Advertising cannot do that with modular.

Second, once the consumer has bought and owns a device for a week, the modularity becomes entirely unimportant. While they “could” change their modules, very few ever do. So they don’t, in the long run, find the modularity of value.

Google would be wise to study the history of products.

Remember when computers cost thousands of dollars and not hundreds of dollars? Today we can swap out hard drives, add external components, etc. This is the future of cell phones. While prices have come down on mobile phones, and the capabilities of the “phone” have improved to a point where the phone is the least important part of the phone, there is still a long way to go. Google is trying something new that may positively impact consumers and push other manufactures to a more efficient and economical model.

This is yet another of those moments where I equate Google today to the Microsoft of the ’90s — both competing against Apple. When the world talked about PCs vs Macs, one of the benefits of the PC world was modularity. What we’re now discussing as a modular smartphone back then was what we called a “Tower PC” — the ultimate expression of upgradeability and modularity. It wasn’t pretty, but it was functional in the long-term. It was the antithesis of the small, lightweight laptop or notebook computer. Then came the first ultimate expression of integration in desktop computing — the first iMac. Microsoft and the PC world continually reminded us that the flexibility, upgradeability, and expandability of their world was the greatest advantage over Apple’s Mac world. Fast forward to today in the desktop computing world, and who cares about any of that? Now we look at smartphones, which themselves were a huge evolution/revolution from the cell phone and phone in general. Before the smartphone did we ever talk about “devices” as a product… Read more »
1
|
0
-   Share

There may be some modularity, but when modularity is taken to the extreme, functionality, design and integration to make a great product is sub-optimized. Imagine a user wanting to keep the processor of his/her iPhone but plug a new screen, new memory yet run IOS12. The number of variations expected by the consumer would create design very complicated, expensive that very few people would want to buy. The secret to the iPhone is its complete design engineered into a complete product.

Google is trying this new approach because they only have 2% of the phone market, and they need to try something different. I believe it will not work. Google would be better off concentrating on being able to deliver to their customers quickly a phone that can be configured to the customer’s desires. Apple and Amazon will not rush to be competitive with a modular phone.

Did computers go modular? Do you cobble together your laptop from a bunch of parts?

No, it’s an inefficient way to design a nice system — each part now needs to be adjusted to fit a more specific form factor, the system can’t be as optimized or efficient as a whole when the components are swappable.

Braintrust
"It is inevitable. And those companies that develop them will boom. "

"I think it is more of a move for Google to find a way to differentiate from the big competitors..."

"Every business “modularizes” and fails. It’s a classic move when a product begins to run out of dramatic new improvements. But it never succeeds. Why?"