Will ‘HoliDeals’ put Target over the top for the holidays? 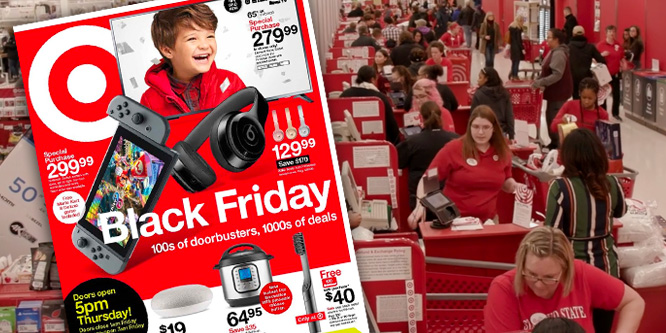 With fewer calendar days between Thanksgiving and Christmas this year, Target, like its major retailing rivals, is looking to get a quick start to the 2019 holiday selling season.

The retailer announced that it is formally kicking off its holiday marketing push with a special “HoliDeals” campaign beginning with a Black Friday Preview Sale today and tomorrow in stores and online. This year’s early sale features four times the number of items it included last year.

Target also announced that it would offer early access to Black Friday deals on Wednesday, Nov. 27 to its Target Circle rewards club members and holders of the Target RedCard. The chain said last month that more than 25 million people had joined Target Circle since it was rolled out nationwide in September following a successful 18-month test.

“This is the busiest time of year for our guests, and with the shortened season, we want to make it as easy as possible for them to cross everything off their holiday list at Target. That’s why we’re introducing HoliDeals, which will feature savings on thousands of items throughout the season, and it all kicks off this weekend,” said Rick Gomez, executive vice president, chief marketing and digital officer, Target, in a statement.

Target’s announcement, while not including details, also pointed to big promotions ahead for Cyber Week (Dec. 1-8) and Green Monday (Dec. 9), which is expected to be the biggest online shopping day of the year.

Mr. Gomez said that Target’s success this season will not just be dependent on deals. He pointed to the company’s staffing plans for the holidays, which includes $50 million in additional spending to offer more overtime for permanent employees while adding seasonal workers to help customers and fulfill online orders from its store locations.

The retailer, whose management regularly refers to itself as the easiest place to shop, is offering customers a wide variety of options to order goods online and receive them quickly. Target has touted its free in-store pickup, an expansion of its drive-up program and delivery with Shipt as same-day options available to customers. The chain also offers free delivery on hundreds of thousands of items with no minimum purchase through Dec. 21.

DISCUSSION QUESTIONS: How does Target stack up against its retail competitors? Where do you see the greatest opportunities and challenges for Target during the holiday selling season?

Please practice The RetailWire Golden Rule when submitting your comments.
Braintrust
"Personally I have never been a fan or participant in the Black Friday frenzy, so I like the idea of getting those deals early, and preferably online."

9 Comments on "Will ‘HoliDeals’ put Target over the top for the holidays?"

Target is making a big move by jumping the gun on Black Friday and for the shortened shopping season. I believe many others will follow them in offering similar opportunities. They do have the lead but will they keep it? I think they will continue to be innovative. Since many Christmas shoppers visit the mall, Target’s biggest opportunity will be from online sales for two reasons. One being the short season and the second being the lack of time for shoppers to visit stores, again because of the short season. The big challenge is getting shoppers to their stores but that is always the case for retailers!

Looks like Target is taking an “all of the above” approach. Can’t say I blame them. It will be interesting to see how the “preview” differs from the real deal. I hope they pack some power into the “real” Black Friday event (odd that I even have to say it that way). It’s already diluted into Black November, so let’s see what is left for Black Friday. It would be great to see something clever, other than an even bigger number in front of the % savings.

Spot on Jeff! I like your reference to “Black November.” As more retailers try to get a jumpstart on the holiday season and start the deals sooner, the impact of Black Friday should not be as dramatic as it has historically been.

Six fewer days and one less weekend tend to get everybody’s attention. Now the mission is to comp for November plus December. I can’t wait to see 4th quarter margins.

Target continues to offer creative service offerings, new product lines and competitive pricing. Adding HoliDeals to kick off Black Friday early is a clever idea that should be well received by their customers. Personally I have never been a fan or participant in the Black Friday frenzy, so I like the idea of getting those deals early, and preferably online.

I also love that they are gearing up to service their guests in a variety of ways. Therein lies success, and my 2 cents.

The part that caught my eye was the early (Wednesday) access to Black Friday deals ONLY for Target Circle and RedCard members. That shows me that Target recognizes the power of their Target Circle loyalty program in helping them connect with their customers in a way that Walmart, which doesn’t have a loyalty card, can’t.

There’s a lot of trade press about the power of Amazon’s Prime membership and their ability to leverage detailed data on their customers, but Target’s move into the loyalty game has not gotten as much visibility. This clever method of driving up enrollment in Target Circle will serve Target well going forward.

HoliDeals seems like a great way to lengthen the selling season while also ensuring that Target is recognizing and rewarding its loyal customers by offering them exclusive early access to deals. Target is also focused on fulfilling customer expectations across multiple channels by ensuring that it can offer cross-channel ordering and fulfillment which will help drive sales. They seem to be trying to check off as many boxes as possible to drive traffic and sales this holiday season — I think it will pay off for them.

There’s no excuse for not trying to creatively solve market conditions like an abbreviated shopping season. Target has effectively added some shopping days and likely will be rewarded. Will have little pity for operators who report disappointing earnings because of fewer shopping days. Target also continues to build “membership” value with this promotion.

Braintrust
"Personally I have never been a fan or participant in the Black Friday frenzy, so I like the idea of getting those deals early, and preferably online."