Will Patagonia win Election Day by sending its workers to the polls? 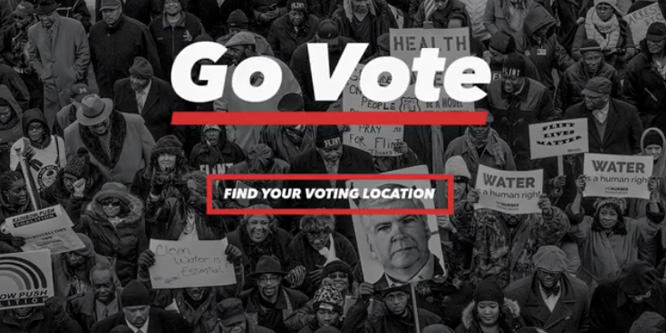 The turnout for the 2012 Presidential election was described in various terms, generally synonymous with dismal. In total, less than 54 percent of those old enough to go to the polls cast a vote. The world’s longest running democracy has a large portion of its citizenship that for various reasons is simply not participating in the process. One retailer — Patagonia — is looking to change that in one small but perhaps substantive way. The company is giving all its workers Election Day off with pay.

Patagonia’s move is part of the outdoor retailer’s “Vote Our Planet” initiative, which seeks to get people to cast votes for candidates most likely to support pro-environmental legislation.

“During a time of catastrophic environmental crisis, when America needs strong leadership to confront the fundamental threat of climate change, voter turnout threatens to reach historic lows as people are turned off by the ugliness of politics,” said Rose Marcario, the chain’s CEO, in a statement. “As a business, we have a unique ability to take a stand and choose to prioritize the health of the planet over profit, and I think it’s important we take that opportunity when it truly matters.”

Patagonia’s activism is not new. The company has been engaged in non-partisan election campaigns going back to 2004. Patagonia kicked off its Vote Our Planet campaign in September with an educational focus on protecting the health of the environment and American families. The campaign strongly supports action to combat climate change and push for a more rapid shift to renewable sources of energy. The chain will have hosted almost 60 events at its 29 stores by Election Day.

Among the various reasons people give not to vote is a lack of time or the loss of income should they go to a polling place instead of reporting to work. This is particularly true among adult low-income earners who get paid on an hourly basis and sometimes work multiple jobs. Low-income earners also point to “illness or disability” as factors in not voting.

DISCUSSION QUESTIONS: What do you think of Patagonia’s Vote Our Planet campaign and its commitment to give workers the day off to vote? Do you think other retailers should be making efforts of some kind to enable workers to cast their votes?

Please practice The RetailWire Golden Rule when submitting your comments.
Braintrust
"Patagonia’s attempts to facilitate democracy by giving their employees a day off to vote is admirable."

"Call me a cynic but I wonder what percentage of Patagonia’s workers actually go to the polls."

"Agree with those who think it should be a national “holiday.” Make it easier rather than harder to vote."

15 Comments on "Will Patagonia win Election Day by sending its workers to the polls?"

Definitely not going to catch on with many retailers. While the company may have good intentions, this seems more like a PR move designed to win favor with shoppers that identify with the Patagonia brand.

Bravo Patagonia! Throughout the world, election day is a national holiday, making voting easier for many citizens. The U.S. should do the same for presidential elections. There are too many states trying to restrict access to the polls. Let’s make it easier to vote.

Patagonia as a brand has always been active in environmental issues so giving their staff the day off to vote is in keeping with the brand’s value. If other retailers tried to do the same, the attempt would be shallow and would bring little or no value to the brand. The employees would simply see it as a free day off. There would be no sense of responsibility or inherent connection to social responsibility.

Patagonia’s attempts to facilitate democracy by giving their employees a day off to vote is admirable. Realistically, most employees only need two hours to get through the line and cast their ballot, but they’re obviously trying to set a precedent. Two hours off on voting day should be law, not an exception. Until then the ability to cast a ballot is income-based, thus non-democratic.

Will it catch on? As much as REI closing on Black Friday is catching on.

I don’t think it’s a PR move. I think it’s part of the company’s ethos. And while I’m not a hiker or a camper, I applaud it.

Hi Paula — I’m not a camper either 🙂 And I do agree that this is another way Patagonia is staying true to its brand value. The telling story is what all other companies do or do not do that reflects on their reputation, public personae and ultimately business success.

With one in four American jobs (42 million according to NRF) in and supported by retail, the Patagonia election day policy would be akin to a national holiday if exercised by all of retail, so other retailers can look at them in admiration for the positive PR the firm will receive.

Patagonia is showing what the company stands for. And along the way they are getting a good bump in employee morale (it was already pretty good) as well as some good publicity. Reminds me of the stand that REI took last year on Black Friday.

I admire the gesture by Patagonia to give workers the day off to vote. Call me a cynic but I wonder what percentage of Patagonia’s workers actually go to the polls. It would be very interesting to see if they respond responsibly so that the sacrifice put forward by their employer is worthwhile.

We should make the most important day in the country’s future a holiday. We have singled out many other days to celebrate, why not Election Day?

This is a version of what REI is doing with the #optoutside campaign: it shows what their customer is all about — committing to vote for the candidate they feel is more about the environment. I’d expect to see a lot more of this type of PR (sincere) in the future from all brands.

Maybe Walmart should have a “making life better” day where they close their stores and give away things they’d normally mark out-of-stock? Or food that’s close to being disposed? You know, making people’s lives better. Hey, don’t sneer, it could happen!

Agree with those who think it should be a national “holiday.” Make it easier rather than harder to vote. Are we talking about Patagonia manufacturing or all Patagonia retail? It definitely spotlights their support of candidates who represent Patagonia’s environmental position. If Patagonia is the only one closed for business on election day, they’ll miss out on customers who vote, and then go shopping, won’t they?

While I applaud Patagonia’s move, I agree that this is not a movement that will catch on for retailers. This move fits with their positioning, creates good PR, and the lost sales will likely be made up very quickly. Unfortunately, my expectation is that if election day became a national holiday, the percentage of people voting would not dramatically increase.

My expectation is that this election will have one of the highest voter turnouts we have seen in years. Not because people will have more opportunity, but because this presidential election has generated more interest than many in the past. Regardless of the outcome, my hope is that level of interest remains and more people will get out and vote in all elections.

Obviously people should be able to vote, and if their work life interferes with that — the mythical 80 hr work week — then maybe an adjustment or accommodation might be necessary. But this is overkill and seems to have little rational basis, other than generating publicity … I vote “no.”

I think we should all do what we can to encourage people to vote on election day. Questioning Patagonia’s motives undermines the positive energy of their policy. I agree with Naomi Shapiro in that anything that makes it easier for people to vote should be supported and encouraged. I don’t expect all retailers to follow suit. But I’m hopeful it will give them pause to consider at the least a few hours off in the morning or evening to encourage employees to vote. It’s hard to agree across the board that it’s OK for employers to recommend what or who to vote for.

I work 6 days a week, and still manage to vote every year, as it my civic duty. If Patagonia wants to give their employees a day’s pay to go vote, more power to them. I understand Patagonia wants to do the right thing, but other businesses following this idea in large numbers — I don’t see that happening. You can also cast your ballot thru the mail early, so there are many ways to get you vote cast without a day off.

I think we should have a paid holiday for everyone to NOT watch TV or the internet, and sit with their families to enjoy a good meal, and some actual conversation, with no distractions. Who knows? They may find out they actually like each other.

Braintrust
"Patagonia’s attempts to facilitate democracy by giving their employees a day off to vote is admirable."

"Call me a cynic but I wonder what percentage of Patagonia’s workers actually go to the polls."

"Agree with those who think it should be a national “holiday.” Make it easier rather than harder to vote."